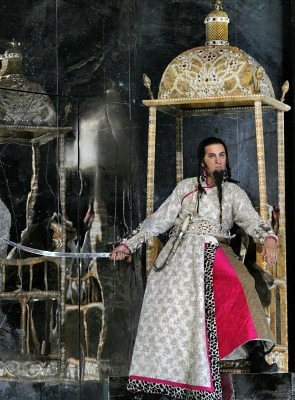 Tom’s Notes Part I contains my comments on Santa Fe Opera’s 2008 presentation of Verdi’s “Falstaff”, and Bob and Annie’s thoughts on the contemporary opera, “Adriana Mater”. William previously posted reviews on the company’s productions of Mozart’s “Marriage of Figaro” and Britten’s “Billy Budd” (to which Tom’s Notes Part I provides hyperlinks).  So far, we  have covered four of 2008’s five Santa Fe Opera productions. 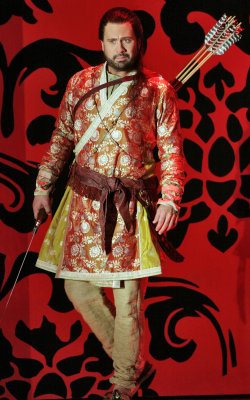 One additional opera remained, one I found to be particularly inspiring. When Santa Fe does Handelian opera, it really goes for Baroque (sorry!).

Santa Fe Opera, prior to 2008, had presented four Handel operas: “Ariodante” with Tatiana Troyanos in 1987, “Xerxes” in 1993, with Federica von Stade and Dawn Upshaw; “Semele” in 1997 with Kevin Langan, and “Agrippina” in 2004. (Agrippina was Caligula’s sister and Nero’s mom – what more could an opera composer want?)

“Radamisto” dates from 1720 and was a great hit at its first performance, attended by the British Royal Family – since Queen Anne’s death, the House of Hanover, led by Handel’s German countryman, King George I.

Although the opera was sneered at by physicist Sir Isaac Newton, it was very fashionable to love “Radamisto”, until a few weeks later, when an Italian opera by a real Italian, Domenico Scarlatti’s “Narciso”, knocked “Radamisto” off the operatic hit parade.

Handel’s libretto is said to be based on the more-or-less true story by the Roman historian Tacitus, involving, as its core theme, marital fidelity (which Santa Fe Opera’s program cleverly dubbed high fidelity.)

Loaded with the richness of Handel’s early style, with most numbers in the da capo style – consisting, as we recall from our high school music appreciation classes, of a “A” theme, followed by a contrasting “B” theme, returning to the “A” theme, greatly embellished with much ornamentation.

In his opera “Radimisto” the title character is a Thracian crown prince married to Zenobia, who is faithful to her husband.  An Armenian King, Tiridate, is married to Polinessa, who is devoted to her husband. All would be well, except that Tiridate decides he prefers Radamisto’s wife, and goes to war to take her, but finds himself foiled when a mutinous army commander interferes with Tiridate’s plans.

[Below: Deborah Domanski is Zenobia, wife of Radamisto; edited image, based on Ken Howard photograph, courtesy of Santa Fe Opera.] 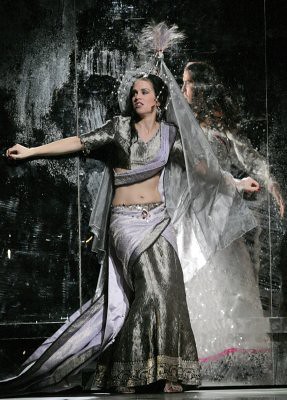 Under the circumstances, Tiridate decided it would be better if everyone stay with their own spouse, and not covet that of any other person.  All agreed this was a good idea, and therefore all proclaimed a happy ending.

Our Radamisto was countertenor David Daniels who brought down the house in tumultuous applause.  So did our Tiridate, dazzling sung by Luca Pisaroni (who had the title role in the performances of “Marriage of Figaro”.)  Just as in the “Figaro” and “Falstaff” performances, the casts were well balanced and all acted to perfection.

Laura Claycomb was in good voice, although the stage direction – a point stressed by my seat-mates Bob and Annie – often placed her in a horizontal position, grovelling on the ground to express pain, although her final aria allowed her the ability to display a huge vocal range that brought the house down.

In one of those instances where the “cover” for an artist ends up taking over every performance, just a couple of weeks before opening night, Christine Rice, the original artist playing the major role of Zenobia, withdrew for health reasons and Deborah Domanski took her place.

[Below: Luca Pisaroni as Tiridate, the Armenian King; edited image, based on Ken Howard photograph, courtesy of Santa Fe Opera.] 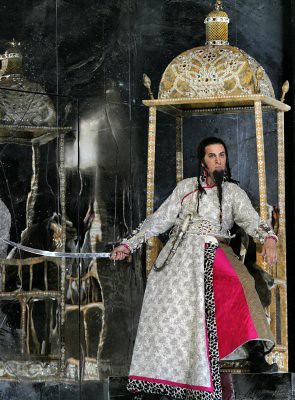 Its producer, David Alden, of course, is a controversial  concept director, especially when it comes to presenting Handel’s operas.  My colleague, William, previously reviewed Alden’s concept of Handel’s “Rodelinda” in San Francisco, with David Daniels in the title role, as a 20th century mob family.

In his extensive essay William used Alden’s work as one of the poles (“art”) for separating “art” from toxic “Eurotrash”.  (See his post the discussion at Separating Art from “Eurotrash”: S.F.’s “Rodelinda” & Stuttgart’s “Alcina”.

William continued his remarks on conceptual clarity at Domingo, Kirov “Walkuere” in Costa Mesa – October 7, 2006 during his discussion of the Gergiev-Tsypin concept of Wagner’s “Ring”.

My long-time friends Bob and Annie described Alden’s “Radamisto” as “almost over the top”, but I thought is was spectacular.

[Radamisto (David Daniels) goes about the affairs of his Thracian kingdom; edited image, based on Ken Howard photograph, courtesy of Santa Fe Opera.] 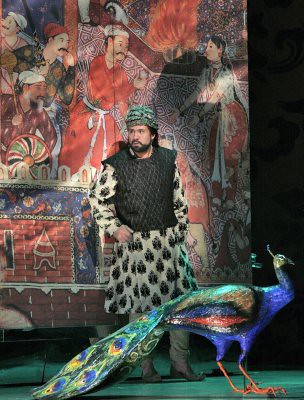 The costumes were spectacular and wildly dramatic – demonic masks worn by the soldiers. A gigantic tiger was felled by dozens of arrows hoisted above the stage.  Thirteen black ravens gaped at the stage in Act I. Cracked mirrors reflected all the action in Act II, which ends with virtually all of the protagonists singing together at the end. 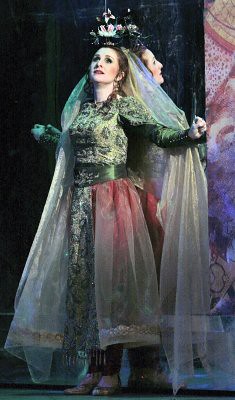 Leading the performances was Conductor Harry Bicket, who had debuted in Santa Fe in “Agrippina” in 2004 and conducted last years’ hilarious Laurent Pelly production of Rameau’s “Platee”.

Believe it or not Handel, who in later life would become uebermeister of choral music (think “Messiah”) never included one chorus in his opera “Radamisto”.