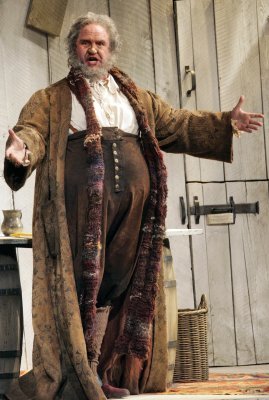 Tom’s Notes on the Santa Fe Season Part I

Your website host William and I share the pleasure of reviewing this summer’s Santa Fe Opera Summer Festival Season. My 2008 Santa Fe season started with a spectacular backdrop for the stage.  Even for Santa Fe, the iridescent-red sunset for the August 18 performance of Mozart’s “Marriage of Figaro” was a phenomenon.

[Below: Sunset at the Santa Fe Opera, photograph by Tom; in the foreground is the Paul Brown “garden” set, ready for the evening’s performance of Mozart’s “Nozze di Figaro”, ] 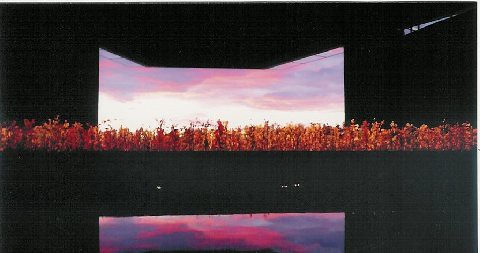 Like your website host, I loved this production, new to Santa Fe.  To me it was the most clever gag/wit/joke/jinks/antic version I have seen in 50 plus years of adoring this masterpiece. This was a stunner!

[Below: Anthony Michaels-Moore as Sir John Falstaff, in a barn that serves as the Garter Inn; edited image, based on a Ken Howard photograph; courtesy of Santa Fe Opera.] 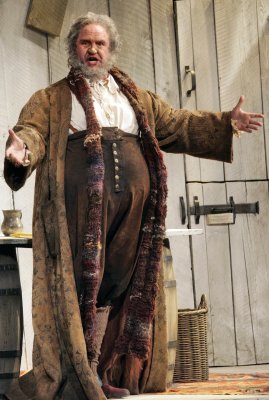 Stage Director Kevin Newbury, rejecting the idea of time-shifting “Falstaff” to some other era (there are still concept directors running amok who regard this as fair game), portrayed the opera as an Elizabethan romp, alive with color and wit (unlike some “Falstaff” productions I’ve seen wherein the wit part happened barely half the time . . .)

This was the fifth time that that Santa Fe Opera has presented “Falstaff” – the first in 1958, exactly 50 seasons ago.  Twice it was performed with veteran baritone Thomas Stewart, who was fabulous as Sir John.

This is Verdi’s only successful comedy.  The only other work in the genre he did was his second opera, “Un Giorno di Regno” (A Day’s Reign), which has enough charm and wit to bely its reputation as a dud. (San Diego Opera staged it effectively in 1981 with Arlene Saunders, proving it to be a stageworthy piece.)

Unfortunately, the opera’s most famous detractor was its composer, Verdi, who regarded it as a failure (he was commissioned to compose it at a time of great personal sadness) and it is rarely performed. 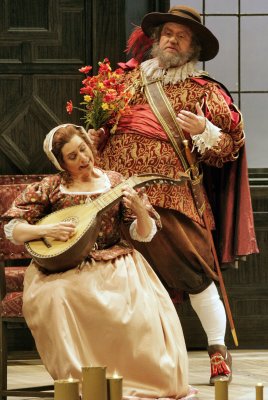 “Falstaff”, the masterpiece of Verdi’s maturity and his final opera, has an almost completely different sound than the great dramatic operas that preceded it.

Our Plump Jack was English baritone and consummate actor, Anthony Michaels-Moore, who obviously revelled in the role to the delight of all.

His cronies, Pistol and Bardolph, were played respectively by Wilbur Pauley and Keith Jameson (both graduates of Santa Fe Opera’s Apprentice Singer Program) with gusto and dazzling flamboyance, matching the mood of this lush production.

In fact, Jameson and Pauley were just two of six former Apprentices in the “Falstaff” cast. Other Apprentice Singer Program graduates were the Meg Page (Kelley O’Connor), the Ford (Franco Pomponi), the Dr Caius (Corey Bix) and the Mistress Quickly (Nancy Maultsby). Successful graduates of this program are now in the forefront of opera around the world and have been for years, happy to say!

Of the many fine performances, I regard that of the Mistress Quickly, sung and brilliantly acted by mezzo-soprano Nancy Maultsby, as especially noteworthy. 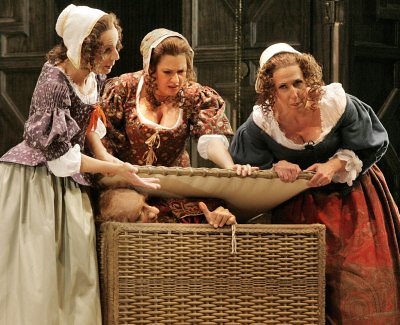 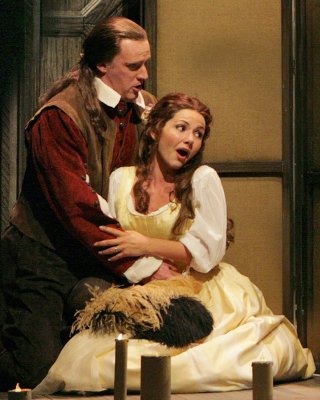 The Santa Fe Orchestra was wonderfully led by Italian Paolo Arrivabeni making his American conducting debut. I suspect this is the beginning of a brilliant American career.

The production’s scenic presentation was by veteran Santa Fe Opera designer Allen Moyer, who designed two of the most lavish productions of Mozart’s marvelous “Cosi fan Tutte” I’ve ever seen!

Neither William nor I were able to get to performances of 2008’s contemporary work Kaaija Saariajo’s “Adriana Mater”, but our colleagues Bob and Annie were able to report on the final of four performances on August 12 where the leading role’s cover, Theodora Hanslowe, replaced an indisposed colleague.

Bob and Annie are both very seasoned opera goers, attentive to the details of each performance, whom William and I see in most of California’s opera venues.  However, it is in Santa Fe, where their seats are next to mine, that we are assured of an annual get-together.

Bob and Annie reported that Hanslowe was radiant, stunning in the simplicity of her stage presence. The voice is a very warm, clear mezzo. She proved to be a wonderful and accomplished singer who did a yeoman’s job on 24 hours’ notice.  The production was riveting. Its theme, the breaking of the cycle of vengeance, so sorely needed in today’s world, left Bob and Annie in awe!

The Summer 2008 season is the company’s 51st since its founding in 1956 by John Crosby, who was succeeded by his protege Richard Gaddes. Retiring this year after eight years at the helm, Gaddes will be succeeded by another Crosby protege, Charles MacKay, who worked at Santa Fe Opera during his high school years and was General Director of the estimable Opera Saint Louis for 24 years. (I saw many of his productions during his tenure.)

William reviewed Santa Fe Opera’s gut-wrenching, brittle, hyper-dramatic Billy Budd on August 14, which he nominates in our Superlatives category as the best production of a Mid-Twentieth Century opera in his experience! For his review, see: Superlative: Original 1951 “Billy Budd” Catches the Santa Fe Wind – August 14, 2008

“Billy Budd” was conducted by Edo de Waart. With his incredible litany of conducting credentials, including Wagner’s “Ring” at San Francisco Opera that both your website host, William, and I attended, de Waart has been named Conductor in Chief of the Santa Fe Opera.

For those persons wishing to participate in great summer festival performances, or for those just trying to think of reasons to spend part of their July and August, 2009 in New Mexico, we offer five reasons to include Santa Fe Opera in your summer travel destinations: (1) the Laurent Pelly production of Verdi’s “La Traviata” with Natalie Dessay’s first Violettas, (2) Donizetti’s “L’Elisir d’Amore” with Dimitri Pittas’ Nemorino, (3) Mozart’s “Don Giovanni” with Lucas Meachem in the title role, (4) Paul Moravec’s “The Letter” starring Patricia Racette, and (5) Gluck’s “Alceste” starring Christine Brewer and Paul Groves.