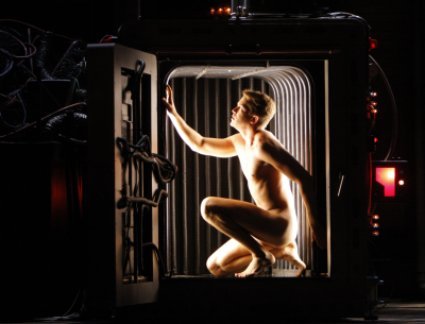 Those who listen to the orchestral suites of Canadian Howard Shore’s soundtrack music culled from such cinema masterpieces as Peter Jackson’s Lord of the Rings trilogy or Martin Scorsese’s The Aviator will recognize an immensely talented composer of luscious music. His invitation to compose an opera commissioned by the Los Angeles Opera based on an American film seemed to promise a truly entertaining Night at the Opera.

Shore’s creative partners in the enterprise were Canadian film director David Cronenberg and California-born playwright David Henry Hwang, who had collaborated on the project of translating Hwang’s play M. Butterfly into a film.  The team chose, as their operatic subject, Cronenberg’s 1986 horror film The Fly, for whom, incidentally, Shore also wrote the music.

I believe that the comments of commentators on first night performances can be of historic interest, and as a matter of principle I try to avoid reading other persons’ judgments until I have posted my own remarks, in the spirit of a non-sequestered juror instructed not to read about or discuss a case. However, both my wife and my Opera Warhorses website colleague Tom alerted me to the fact that the buzz on The Fly indicated that it had annoyed some of the reviewers.

In fact, between the world premiere at the Theatre du Chatelet in Paris in July and the American premiere in Los Angeles two months later, they could find enough negative comments to provide contemporary examples for a wikipedia article on “scathing reviews”.

[Below: the scientists have a party in Dante Ferretti’s unit set from the Theatre du Chatelet; edited image, based on Robert Millard photograph, courtesy of Los Angeles Opera.] 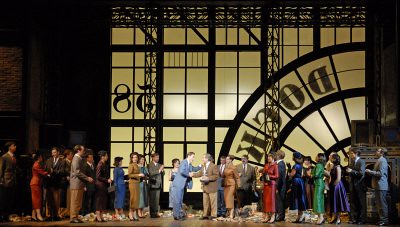 So few operas in the last few decades have been box office successes that, if indeed, “The Fly” already has been written off as a failure (Mosca fiasco?), it might be worth understanding why, when one begins with such a talented group of collaborators, the product – at least so far – feels like a miss, instead of a hit.

Perhaps we should begin by accentuating the positive.  The sets were by Dante Ferretti, who brings his own awesome credentials as assistant production designer for 1960s films by Pier Paolo Pasolini and Federico Fellini, as set designer winning Academy Awards for Martin Scorsese’s The Aviator and Tim Burton’s Sweeney Todd, and as a set designer for productions at La Scala, and for opera companies in Paris, London, Florence and Madrid.

Ferretti’s unit set was interesting and imaginative, providing settings for every scene in the opera. The lighting designer A. J. Weissbard used modern technique and perhaps a bit of magic to change the mood and sense of place without leaving the unit set. Makeup and Creature Designer Stephan L. Dupuis (another Canadian), who himself won an Academy Award for makeup for Cronenberg’s 1986 Fly film, intrigued the audience with a very convincing monkey who was telepodded across the laboratory, as well as other “Fly” imagery of various degrees of  horror.

Placido Domingo added his prestige to the project by conducting the American premiere, as he did the world premiere at the Theatre du Chatelet.  He also will share the remaining five Los Angeles performances with Conductor Israel Gursky. 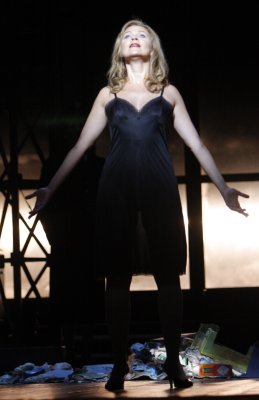 The cast was generally first rate. I had not seen Ruxandra Donose since she played the trouser role of Sesto in John Copley’s 2002 production of Handel’s “Giulio Cesare” at San Francisco Opera. She handled Shore’s extraordinarily demanding role of Veronica Quaife with skill, earning her audience admiration.

In a scene that seemed both extraneous and rather more successful than scenes more critical to the plot, Jay Hunter Morris gave an inspired performance in the role of the arm wrestler Marky.

After his performances in Paris and Los Angeles, clearly the person whose public image has been enhanced by this opera is Daniel Okulitch. I confess that although I had seen him in two other much smaller roles a half decade ago, I have indistinct memories of his performances.

But as Seth Brundle, he gets to wear the currently most famous get-up that Costume Designer Denise Cronenberg has ever conceived – Okulitch’s bare skin.

[Below: Daniel Okulitch as Seth Brundle, about to telepod himself across the laboratory to mixed results, Denise Cronenberg designed the production’s costumes; edited image, based on Robert Millard photograph, courtesy of Los Angeles Opera.] 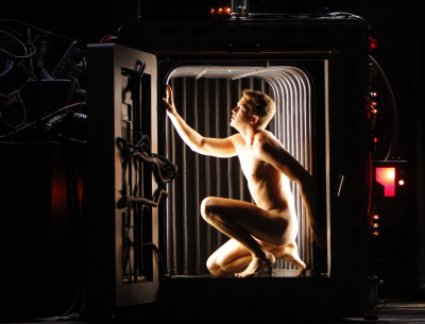 I suspect that few opera singers will consent to full frontal nudes, but Okulitch seems not to have stage inhibitions.  In other scenes in various costumes, at least one sexually provocative, he engages in simulated sex with Donose and Ashlyn Rust (Tawny Perkins). He also is responsible for some rather strenuous and athletic stagecraft, including an episode of crawling (like a fly on the wall) across the top of the stage.

Okulitch has proven crucial to such success as “The Fly” has had in Paris and L. A. He is the only person scheduled to sing Seth Brundle in Los Angeles. Laurent Alvaro sang a single performance in Paris. Is Alvaro covering him here (wordplay unintended)?

Even so, I often felt that the part was not written for his voice. Although Okulitch describes himself as a bass baritone, he seems more a light baritone in a  part seems that written for a heftier bass baritone, so that he is constantly having to sing in the lower part of his range.

The Hwang Screenplay: Too Much Information 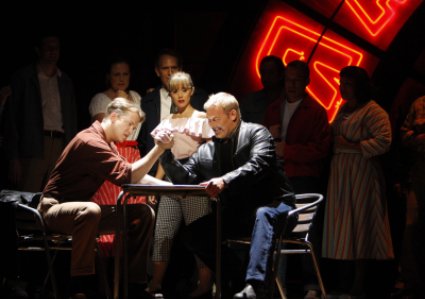 Why does it seem that “The Fly” will have a short lifespan?

My guess is that the answer lies in how the creative team chose to organize itself. Let me explain at some length.

Since the next opera which I plan to review is Verdi’s “Simon Boccanegra” in San Francisco, I have been reviewing the correspondence between Giuseppe Verdi and his great librettist Arrigo Boito, who developed libretti also for Ponchielli’s “La Gioconda” and Verdi’s “Otello” and “Falstaff”.

“Boccanegra” is, of course, an opera that was not successful initially, but was “re-released” in a substantively altered version.

Verdi and Boito, through their correspondence, were constantly engaged in determining how to improve an initially unsuccessful opera.  Every line of the older work was examined; every proposed change or innovation was discussed back and forth. Irresistable new music was added. Eventually, a masterpiece, that survives in its altered form to this day, was the result. An unsuccessful work was successfully reconstructed.

In my estimation there are two problems with “The Fly”.  The first is that the libretto (the screenplay) seems not to have been developed through close collaboration between the opera’s composer and its librettist – at least not a collaboration that attempted to divine what an audience would wish to see and hear.

There is an analogy between the screenplay of a movie and the libretto of an opera.  Every composer of an opera that survives in the repertory was actively engaged with his librettist. There are the exceptions of composers who wrote their own libretti, such as Wagner and Floyd, although the libretti of both of these composers have their detractors.  There are also operas that set a play to music – Berg’s “Wozzeck” and Debussy’s “Pelleas et Melisande” are the principal examples. But, worthy as both are, neither ranks high in most audiences’ lists of top favorites.

Often, there was tension between the librettist’s desire to provide “exposition” – not only providing crucial elements of the story, but explaining details thought to enhance the audience’s understanding of the plot. But what might clarify in the cinema might stupefy in the opera house.

The composers of the most successful operas were usually those determined to keep recitative and other forms of exposition at a minimum. No one goes to an opera performance to hear the recitative. 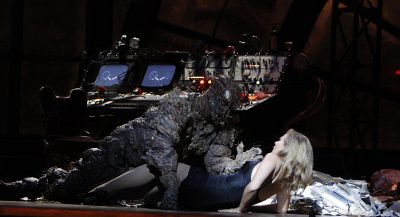 A reader of this website will be aware of the discussions between librettist and composer on operas going back at least to Bellini’s “I Capuleti e i Montecchi” as to how much libretto should be cut to quicken the pace of an opera.  Readers will recall that Bellini cut so much out of the great librettist Felice Romani’s work that Romani required that an apology from him be included in the published edition of the work, regretting that so much was cut, that people wouldn’t understand the story.

Perhaps Shore, Hwang, and Cronenberg had daily discussions over many months as to whether any particular line of Hwang’s libretto was necessary.  Nothing in the resulting work leads me to believe this is true.

But if “The Fly” is to be a long-term success, someone needs to be brought aboard who has deep knowledge of the kinds of dramatic situations that translate effectively into opera, with the authority to jettison most of the “exposition” parts of the libretto.

We know Seth has created telepods that can transform matter. We know a fly will accidentally crawl into the telepod when he is being transported and that will cause him grief. Why can’t this be said in many fewer lines?

The second problem is the music that Shore composed for this opera.  He is a masterful composer and is able to produce interesting music in eclectic styles. He is also used to strong film directors specifying exactly what sound was needed for this or that part of the film. He apparently is fascinated with mid-20th century avant-garde composers and “The Fly” gave him an opportunity to emulate or at least offer homage to the likes of Krzysztof Penderecki and John Cage.

Perhaps the opportunity to do his own thing rather than respond to the precise wishes of a Peter Jackson made “The Fly” an intellectually challenging assignment for Shore, whether or not Shore’s new directions had a rapport with his audience.

There is some lyrical and likeable music associated with the love scenes. The telepods and the primitive computers that run them are voice-activated with a 44 person chorus effectively representing the computers’ “voice”. Grant Gershon, the Los Angeles Opera Chorus Master and computer voice activator, deserves kudos.

Unfortunately, this composer, famous for the beautiful Lord of the Rings melodies, has been too sparing of his melodic talents in this opera.  In a future remake, he should be persuaded to share his melodic gift with “The Fly’s” audience. After all, the reason why we hear “Simon Boccanegra” these days is that Verdi poured his soul and his melodic inspiration into the opera’s remake.

I detect in the DNA of “The Fly” a potentially successful one-act opera that retains the current ensembles, and all the “electronic” choruses, especially if some new genetic material (the expansive melodies we associate with Shore’s cinematic work) is gene-spliced into the finished product.

There you have it.  “The Fly”, in what many should  hope is merely its first version, has some virtues, but also has the baggage of a libretto (screen-play) that tries to sing information about life and the cosmos, where science may be adrift, and other subjects that the librettist, though probably not the audience, finds interesting.  No strong composer seems to be empowered or even present to demand that the imperfections of the libretto be rectified or cut out entirely.

In an artistic community in which so many are engaged in understanding and presenting what audiences want, there appears to have been little study, as one expects from the producers of most major films themselves, into what an operatic audience wants, or, at least, what would hold their attention.  After the current run in L. A., perhaps some additional days on the drawing board could be well spent.