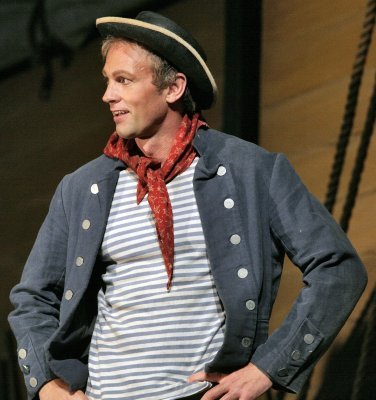 Several decades have passed since mid-20th century operas by Britten, Stravinsky, Poulenc and Floyd, among others, were composed.  Several of these works have a substantial performance history, with productions mounted at companies throughout the world.  At some opera houses, over the past several decades, there have been three or more new productions of at least one opera that was created in the 1940s, 50s or 60s.

Even so, very few operas from this period are done frequently. The ultimate survivors appear to be the operas of Benjamin Britten, with at least two works (“Billy Budd” and “Peter Grimes”) contending to become repertory standards and another two (“Midsummer Night’s Dream” and “Death in Venice”) having received sufficient attention of  enough of the world’s major opera companies that they no longer can be deemed unfamiliar works.

Over the next year this website will feature a special series on upcoming Britten opera performances in companies that we visit regularly.  In addition, we expect to schedule at least one European new production of a Britten work. Here are some of the places on our list of places we hope and expect to go.

New Zealander Teddy Tahu Rhodes is Billy, the force of good, Peter Rose is Claggart, the force of evil, and William Burden is Captain Vere, an intellectual seafarer who understands that with Claggart’s unintended death at Billy’s hands, good has triumphed over evil, even though he must condemn Billy to death. 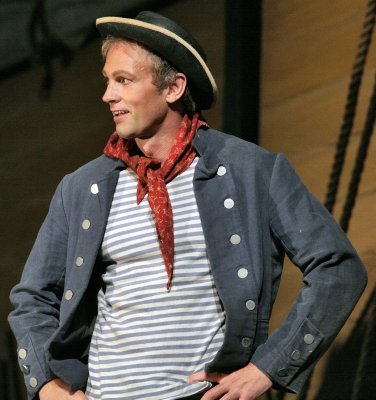 The second work visited in a five-year Britten cycle (following last season’s “Billy Budd”), Houston Grand Opera is launching a new  Neil Armfield production (with the Canadian Opera Company) of this magical opera based on the Bard’s cherished play. The sets and costumes are by Dale Ferguson in his first HGO assignment.

[Below: Queen Tytania (Laura Claycomb) is surrounded by attendant fairies; edited image, based on a Felix Sanchez photograph, courtesy of Houston Grand Opera.] 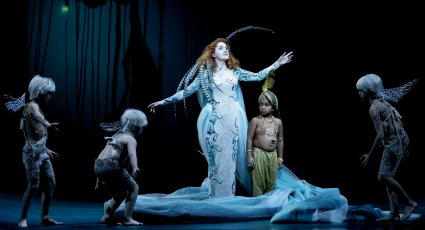 Website favorite Laura Claycomb is Tytania, with Welsh counter-tenor Iestyn Davies as Oberon. Norman Reinhardt, Liam Bonner, Katie van Kooten and Marie Lenormand play the mortal couples and Matthew Rose is the scheduled Bottom.  Patrick Summers will conduct. When it shows in Toronto in an eight performance run from May 5 through May 23, an entirely different cast will be assembled.

Britten’s masterpiece is about a loner fisherman distrusted and judged by his seafaring community. Paul Curran (director) and Robert Innes Hopkins (Set Design) collaborate for Washington National Opera at the Kennedy Center. Ilan Volkov will conduct. The cast is led by Christopher Ventris as Grimes, Patricia Racette as Ellen Orford and Alan Held as Balstrode. David Cangelosi will be Bob Boles. 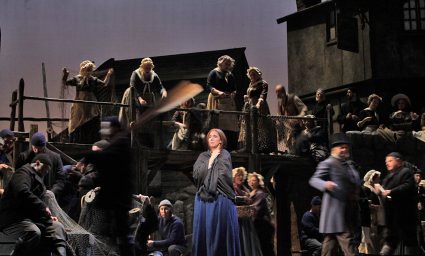 Thomas Mann’s novel is sensitively transformed into Britten’s last major opera, in a new production at the Hamburgische Staatsoper. Michael Schade is Aschenbach and Nmon Ford is the Traveler. The production is by Ramin Gray (of London’s Royal Court Theatre) with sets by Jeremy Herbert. Simone Young conducts.

[Below: Aschenbach (Michael Schade) is increasingly obsessed with the boy Tadzio (Gabriele Frola, front right), here on the Venice beach with a companion; edited image, based on a Joerg Landsberg photograph, courtesy of Hamburg Staatsoper.] 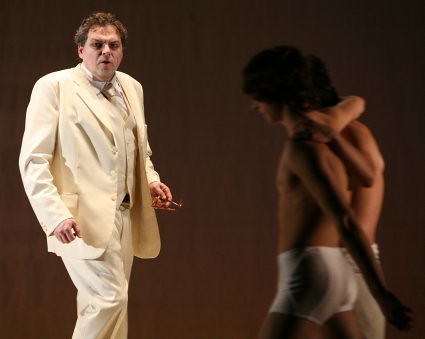