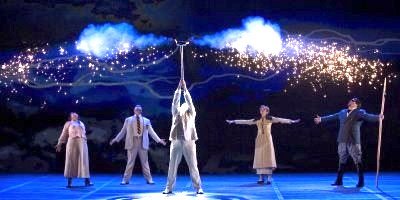 Although I recently posted a review of San Francisco Opera’s June 14th performance of Wagner’s “Das Rheingold”, circumstances caused me to attend a second performance of this first opera in Francesca Zambello’s production of “Der Ring des Nibelungen”.

My first review outlined my views on what I regarded as an extraordinarily high standard of singing.

In the latter part of the 20th century, San Francisco Opera had a reputation for doing Wagner conscientiously, and many legendary performances are remembered, but the Runnicles “Rheingold” achieved an across-the-board excellence in singing that from my experience was not matched in any of the six previous seasons (1967 through 1999) that “Rheingold” was mounted in San Francisco during my lifetime.

(There were a total of two performances of “Rheingold” at San Francisco Opera prior to 1967, both before I was born.)

I also expressed admiration for how well the team of Conductor Donald Runnicles and the San Francisco Opera Orchestra performed the piece, and how compelling I found the Zambello concept (whose “Walküre”, presented at Washington National Opera in 2007, I have already reviewed).

There is a detectable reaction to Zambello’s conceptualization of the “American Ring”, the reports of which make it seem more notorious than it does when one is viewing the performance.  Yes, the supertitles do translate “Rheingold” as “pure gold” as discussed in my previous review, and some of the images suggest that this “Ring” contains a “message” – perhaps feminist, or anti-war, or pro-environment, or maybe even something else.

But whatever messages are intended, they must be mostly subliminal, because the performances ring true as telling the story just as Wagner wrote it for us.  Zambello’s dramatic instincts are obviously founded in that story. No true Wagnerian need stay home for fear that the “Ring” has been despoiled.

[Below: What’s the Worst that Could Happen? Alberich (Richard Paul Fink) accepts Loge’s challenge to use the Tarnhelm’s Magic to become a small creature; edited image, based on Terrence McCarthy photograph, courtesy of San Francisco Opera.] 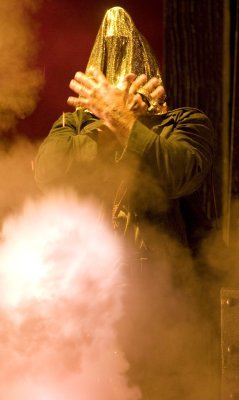 But it immeasurably strengthens the “Rheingold” experience if the remaining characters are well cast and impressively sung.  I spent time in the last review on the extraordinary Fasolt of Andrea Silvestrelli (who is scheduled to repeat this role in the 2009 Seattle “Green Ring”, as will Fink the role of Alberich).

Silvestrelli has a sonorous bass voice and is a remarkable actor, with the ability to project the character’s true affection for Freia and indecision about what strategy the Giants should pursue in their dealings with Wotan. By far the tallest member of the cast, Silvestrelli seems an imposing giant, even before he dons the stilt-boots, and large metal hands (one of which is a hook) that make him look huge.

His partner – ultimately his murderer – Fafner (Günther Groissböck) is more dependent on the stilt-boots and the metal hands to project a giant’s persona, but he is also a fine actor and has the requisite voice.

Although I have never heard Fasolt sung better than in Silvestrelli’s interpretation, it actually would be interesting seeing Groissböck and Silvestrelli reversing the roles in a later production. Silvestrelli, with a large voice and heavier build, should prove to be convincing as Fafner, the more villainous of the two giants. 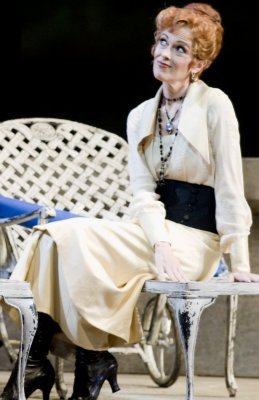 The group of performers that played Wotan’s wife Fricka (Jennifer Larmore) and in-laws Froh (Jason Collins, who also will repeat his role at the 2009 Seattle “Rheingold”), Donner (Charles Taylor) and Freia (Tamara Wapinsky) also should be individually recognized as well.

(I had previously expressed admiration for Wapinsky’s fine Freia, who not only brought vocal strength to the role, but helps make the collective accomplishments over the years of San Francisco Opera’s Adler Fellows, and she is only in her first fellowship year, ever more awesome.)

Larmore, whose roles hitherto have been associated with baroque/rococo opera and bel canto was an unexpected choice as Fricka, whom I have heard sung at San Francisco Opera by, among others, such eminent Wagnerians as Irene Dalis (1967) and Hanna Schwarz (1977).  Yet she was a convincing actress and appeared to meet the expectations of her mentor in this role, Donald Runnicles.

None of Fricka’s siblings have that much to sing, but when they do, they are usually the center of attention. Jason Collins clarion voice reveals a heldentenor of the future.  (More than one tenor who sings Lohengrin had been cast as Froh early in his career.  In fact, he appears to have committed to having the role of Siegmund prepared for the 2009 Seattle “Ring”, presumably covering Stuart Skelton.)

Charles Taylor did a fine job as Donner, whose vocal line dominates some of the penultimate music of the final scene, and who, in this production, has some eye-catching stage business as well (see picture below). 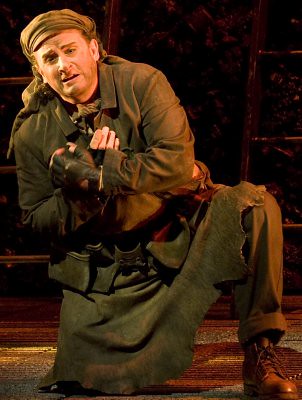 I have appreciated the skills of character actor David Cangelosi on this website previously, and was impressed at his strong performance as the “Rheingold” Mime.  Cangelosi is scheduled to play the character in both “Rheingold” and “Siegfried” when the complete “American Rings” are performed in Washington DC (2009) and San Francisco (2011).

The American Ring has incorporated some more or less contemporary concepts (give or take a century and a half), perhaps at the expense of some of the mythic and magical.  Even so, wherever Wagner calls for magic or, at least, illusion (and at times when he doesn’t) Zambello provides it. For both of the times that Alberich dons the Tarnhelm a laser flash and bellowing smoke accompanies his disappearance from the stage. 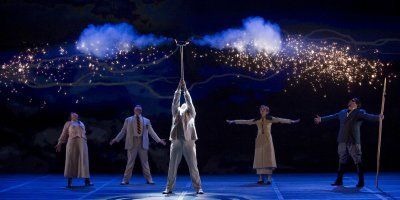 When Donner is called upon to create the thunder, he is not carrying the croquet mallet with which he appears in the gods’ first scene,  but instead carries Donner’s hammer.  At the thunderclap that Wagner specifies, that hammer spews out a stream of sparks and the heavens (or at least stage projections) respond with a spectacular lightshow.

After enthusiastic applause at the final curtain, a fairly large group of selected subscribers was invited to a “cast party” following the performance, in which each of the principals, joined by Conductor Runnicles, spent a pleasant hour with the gathering.  This gave me the opportunity to interact with cast and crew.

In the past two years, of course, many fans of the San Francisco Opera have regretted that Conductor Donald Runnicles’ musical directorship is completed at the end of next season and especially that, as far as is presently known, Runnicles is not scheduled to appear in San Francisco after conducting the complete Zambello Rings in 2011.

Therefore, I was pleased that in personal conversations with him regarding his future at Deutsche Oper Berlin (that I expect to visit in April, 2009), he indicated that conversations about post 2011 assignments in San Francisco were currently taking place.  (Later, he announced this to the entire gathering.)

Conductor Runnicles introduced all of the members of the cast to the gathering, and elicited from his Wotan, Mark Delavan, a heartfelt expression on behalf of the entire cast of appreciation for Runnicles’ mentorship and support.  The term “angel” was used to describe him.

Larmore said that she was interested in exploring other Wagner roles.  My recent review of Pittsburgh Opera’s production of Bellini’s “I Capuleti e i Montecchi” makes the point that a bel canto singer and Bellini specialist whom Wagner especially admired created the roles of Adriano in his “Rienzi”, Senta in “Fliegende Hollaender” and Venus in “Tannhauser”.

I could imagine Larmore, in the right house with Runnicles conducting, exploring the latter role, which seems to have a range similar to other roles in Larmore’s repertory.

Runnicles then himself invoked Wagner’s regard for Bellini’s vocal writing, and invited audience questions.  This permitted me an opportunity to offer my personal opinion based on attending “Rheingold” in every year San Francisco Opera produced it since 1967, that the 2008 “Rheingold” was not only the best sung ever, but that the cast met my personal definition of bel canto Wagnerian singing – voices that I would go to hear sing BOTH  in Wagner and in the operas of Donizetti and Bellini.

I asked my question of the cast – how many of them sing in Donizetti, Bellini or Verdi operas? As far as I could tell, the entire cast responded that they did sing the Italian roles as well.

I was able to confirm the Rosenberg administration’s discarding of the 1983 Lehnhoff-Conklin sets with S. F. Opera’s current General Director David Gockley, who said that, wishing to present a “Ring” in San Francisco, he had been prepared to revive that production (seen also in 1985, 1990 and 1999).  However, with those sets gone, the prospect of working with Zambello and the Washington National Opera was an appealing alternative.

In fact, he was involved in the early history of the Zambello project, having been in discussions with her on the concept when he was the General Director at Houston Grand Opera.  Her ideas advanced far beyond those early discussions in Houston, and she was able to secure the support of  Placido Domingo and the Washington National Opera to begin the steps to realize her vision.

I originally had not expected to post a review of another performance of “Rheingold”, but I do believe it was an illuminating day, worth observing. This website likely will be reporting next year on the “Green Ring” in Seattle and at least the parts of the “American Ring” at Washington National Opera unseen so far, as well as another new Ring, whose “Rheingold” and “Walküre” will take place at Los Angeles Opera in 2009.

Each of these Rings will offer different images, and partisans are likely to emerge as to whether any one concept meets their ideas of how the “Ring” should be presented.  However, what has emerged in the 21st century are beautiful voices capable of singing the Wagner as if it were bel canto.

It is of interest that, regardless of what images the costume they wear will project, or how the sets are designed, many of these bel canto voices that were heard in San Francisco, will return here in 2010 and 2011 and will, in the meantime, be heard in Seattle, Los Angeles and Washington, DC.

For my review of the June 14th performance of this production, see: Delavan Shines in a Gleaming San Francisco “Rheingold” – June 14, 2008

For further discussion of the ties between Bellini and Wagner, see: Beautiful Singing in Bellini’s “Capuleti”: Pittsburgh Opera – May 3, 2008