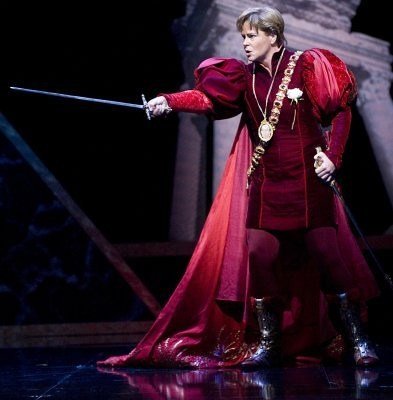 This is the 30th anniversary of San Francisco Opera’s first foray into the operas of George Frideric Handel. The San Francisco Handel productions, particularly those associated with British stage director John Copley, have often defined elegance in the performance of baroque opera, with lavish costumes and singing of the highest quality.

[Below: Ariodante (Susan Graham) kneels before the King of Scotland (Eric Owens); edited image, based on a Terrence McCarthy photograph, courtesy of San Francisco Opera.] 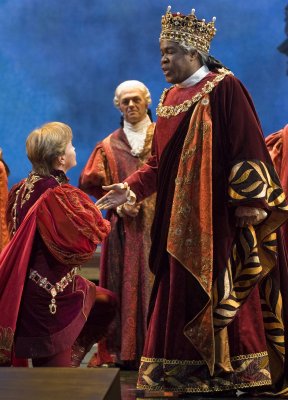 In what have to be seen as highly symbolic repertory and production choices by San Francisco Opera’s present day general director, David Gockley, another of Handel’s masterpieces – “Ariodante” – was mounted for the first time by the company. The casting choices further confirmed this website’s thesis that this opera company has returned to the first rank of the world’s leading opera houses.

The two lead roles, Ariodante and Ginevra, were respectively Susan Graham and Ruth Ann Swenson, whose lustrous international careers were launched after training in the San Francisco Opera’s Merola program for young artists.  Further, Swenson was not only, like Graham, one of the Merolini, but was a 1983/1984 Adler Fellow as well.

Ariodante’s secret adversary, the villainous Polinesso, Duke of Albany, is the role of the American debut of contralto Sonia Prina (whose early training took place in the young artists program of Milan’s La Scala).  There were two other important San Francisco Opera debuts as well – Argentine soprano Veronica Cangemi (Dalinda) and American tenor Richard Croft (Lurcanio). The latter artist is the brother of Dwayne Croft, who created the role of Robert E. Lee in San Francisco Opera’s world premiere of Glass’ “Appomattox”). Cangemi and Richard Croft repeat the roles they recorded in Marc Minkowski’s Archiv production for Deutsche Grammophon Records.

Conductor Patrick Summers led a downsized (38 modern instruments) San Francisco Opera Orchestra, augmented by two harpsichords (one played by Summers himself during recitatives and at other points of the opera), a cello continuo, theorbo and baroque guitar.

John Conklin’s physical production and costumes by portrait painter/costume designer Michael Stennett, were created for the Santa Fe Opera in 1987, with Tatiana Troyanos as Ariodante.  The production is now owned by the Dallas Opera, which revived the production in 1998, with Vivica Genaux in the title role.  The production was subsequently seen in New York City Opera (2002) and San Diego Opera (2004), again with Genaux.

A front scrim, adorned by a portrait of Handel himself, was raised after Summers’ spirited overture, revealing Conklin’s simple but serviceable unit set.  Consisting of four large panels, suggesting walls adorned with slabs of black marble with broad gold trim on their top edges, these panels shifted positions during the various scenes, sometimes revealing a framed back wall screen on which was projected clouds or fragments from classical architecture.

For the first scene, we are in the chambers of the Princess Ginevra, who is with her lady-in-waiting, Dalinda.

[Below right: Ruth Ann Swenson as Ginevra, edited image, based on a Terrence McCarthy photograph, courtesy of San Francisco Opera.] 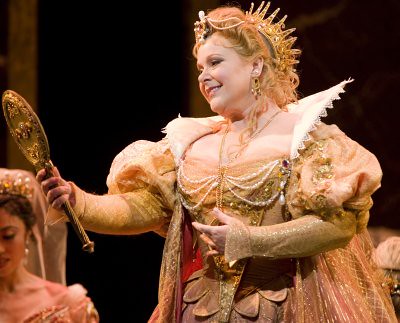 Now in possession of a voice whose size might be the envy of a spinto soprano (even accounting for the fact that the orchestra over which her voice must be heard is relatively small), if she announced that she was preparing to sing Leonora in the new production of Verdi’s “Il Trovatore” expected in the Opera’s 2009-2010 season, it would no longer astonish me.  Yet her vocal maturity has not diminished Swenson’s mastery of Handel’s intricate coloratura.

The first scene of “Ariodante” is by no means the exclusive domain of Ginevra, for her two arias are followed by one for Dalinda, impressively sung by Victoria Cangemi in her San Francisco Opera debut.  This was followed by another two arias for the evil Polinesso, Duke of Albany, which proved to be the United States’ first opportunity to see a performance by Sonia Prina, whose albums of baroque arias have preceded her American debut here.

Few operatic actresses have the opportunity to personify a character so inherently evil as Handel’s Duke of Albany, and Prina proved up to the task, setting into motion events that nearly bring catastrophe to every one of the opera’s decent people.

[Below left: Sonia Prina plays Polinesso, the Duke of Albany; edited image, based on a Terrence McCarthy photograph, courtesy of San Francisco Opera.] 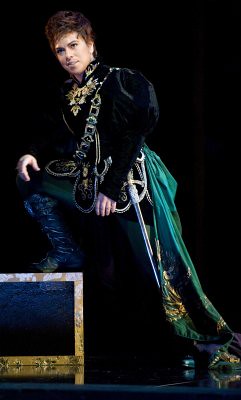 When things appeared to be going the Duke’s way, Prina evoked laughter from the audience when the supertitles expressed the Duke’s sentiments that if all his plots succeeded, he planned to give up virtue altogether.  Fortunately, for those who prefer to see good triumph over evil, the Duke’s plans unravel and he is skewered by Ariodante’s brother, Lurcanio.

After almost a half a dozen exquisitely sung arias from the two leading sopranos and the contralto, comes the first scene with the opera’s eighth century hero. The Knight Ariodant, one of Charlemagne’s liegemen, has crossed the channel with his brother Lurcanio to experience the adventures, that are told to us in Canto V and VI of Ariosto’s epic Orlando Furioso, that Ariodante finds in the vaguely Arthurian, mysterious land of Scotland.

Mezzo-soprano Susan Graham portrays the handsome, truly elegant Ariodante, who charms Ginevra and her father, the King of Scotland, as much as Graham charms the San Francisco audience in her intensely expressive, beautifully sung series of arias. Although Scherza infida is perhaps the most famous, every one of Graham’s arias, which encompass rage, despair, joy and affection, provides a triumphant example of how well Handel can be performed in the modern day.  For her efforts, Graham was greeted with a standing ovation at opera’s end.

The opera’s plot ultimately has the same source as the sub-plot in the Bard’s “Much Ado About Nothing” in which Don Pedro and Claudio believe they are witnessing Hero’s infidelity to Claudio, when it is in fact a deception perpertrated on them by Don John. (In the opera, Ariodante and Lurcanio witness Dalinda disguised as Ginevra, in a trick perpetrated by – guess who?)

[ Below right: Susan Graham as Ariodante; edited image, based on a Terrence McCarthy photograph, courtesy of San Francisco Opera.] 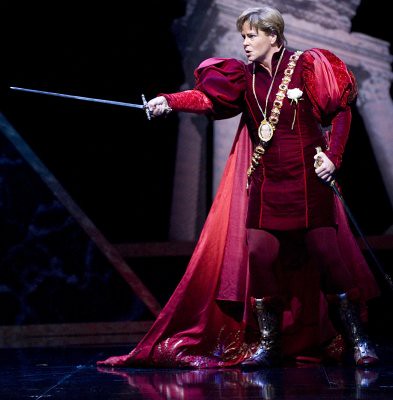 But it becomes intoxicating fare indeed, as emotions are wrung from each character in the unrelenting succession of beautiful melodies.

But in “Ariodante”, what would seem from the opera’s synopsis to be a fairly thin story for a long opera (with two intermissions, spanning three and a half hours.)

Graham, Swenson and Prina are well worth the price of the show, but there are charms beyond that.  The part of Dalinda is one of the great Handelian seconda donna roles (if we can use the term for a performance in which two of the male characters are played by women), but she is one who, after being duped and humiliated and endangered by Albany, finally wins her own prize – the Knight Lurcanio, who, after all, is, by the end of the opera, the brother of the heir to throne of Scotland. In an affecting duet, Cangemi and Croft express their characters’ vows of love.

It is noteworthy how convincing were the performances of this productions’ two travesty roles, in which women singers play male parts.  Prina usually shared the stage with her fawning squire (played by auxiliary chorister Anders Froehlich).  Prina’s stage presence and costuming made the possibility of the suggested gay relationship between the Duke and his squire seem plausible.  Similarly, Graham was such a virile and handsome Ariodante that she and Richard Croft’s Lurcanio really seemed to be brothers.

Handel at the San Francisco Opera

[Below left: Richard Croft as Lurcanio and Victoria Cangemi as Dalinda; edited image, based on a Terrence McCarthy photograph, courtesy of San Francisco Opera.] 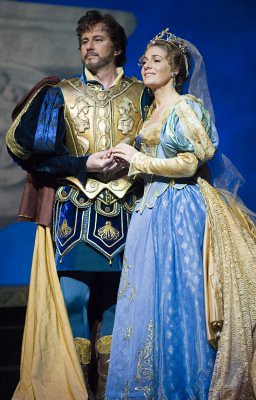 Thirty years ago, San Francisco Opera presented its first Handel opera in the low budget Spring Opera Theatre (SPOT).  The production was a resounding success for a young singer – Carol Vaness as Cleopatra. In its first tentative steps in dealing with the reality of Handelian roles written for castrati , the role of Julius Caesar was transposed from the treble clef and sung by bass-baritone John Ostendorf.

Significantly, the set designer for the SPOT production was John Conklin, creator of the “Ariodante” sets seen in this season’s performances. (The opera’s program erroneously lists a revival of his wonderful 1977 San Francisco Opera production of Verdi’s “Un Ballo in Maschera” to open the 2006 San Francisco Opera fall season.  One wishes that were so.  Conklin’s costumes for the production were indeed used, but the sets were apparently destroyed by the previous San Francisco Opera administration.)

The team of Copley, Mackerras, Stennett and Pascoe was invited back for the 1985 season to present the Chicago Lyric Opera production of “Orlando” with Marilyn Horne, Valerie Masterson and Ruth Ann Swenson, with Mackerras conducting from an edition on which he again collaborated.

Fifteen years later (Fall 2000) Copley, Mackerras and Swenson helped bring forth another Handel, “Semele”, in a Royal Opera Covent Garden production; and in Summer 2002 English National Opera’s Pascoe/Copley “Julius Caesar” was revised in an updated concept that had been developed for the New York Metropolitan Opera.

San Francisco Opera’s controversial former general director Pamela Rosenberg, although a self-styled partisan of Handel’s operas, tinkered with what seemed to be a surefire formula for success with San Francisco Opera audiences, when, in Fall 2002, “Alcina” was presented in Anna Viebrock’s bewildering and sometimes offensive Eurotrash concept and in 2005 “Rodelinda” was introduced as a seeming take-off on the cable TV series “The Sopranos”, although time-shifted from contemporary times into Al Capone’s gangland Chicago.

Rosenberg demonstrated that concepts that might appear to work in Stuttgart can bomb in California.  Copley and his London associates have proven to be the guardians of the legacy of this German composer, whose greatest successes were created for London. For San Francisco Opera audiences, general director Gockley chose to return to the successful pathway to achieving audience support for Handel in California – presenting singers of the highest accomplishment in elegant productions, from or inspired by the work of London’s contemporary guardians of the Handel operatic legacy.

The audience at the San Francisco Opera’s first “Ariodante” included some of the opera world’s elite.  Those able to secure tickets to this wonderful production’s subsequent performances should take the trouble to do so.