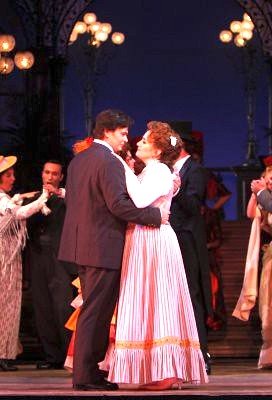 We are now well into the “Puccini Year” whose high point will be the observance of the 150th anniversary of Puccini’s birth on the 22nd of December. A consequence of the celebrations is a new appreciation for the hitherto less popular works of the Tuscan master. For example, there has been sufficient interest in his “La Rondine” to sub-title the Puccini Year as the Year of the Swallow.

“Rondine”, rather a rarity in the 20th century, now has become the center of intense interest, with two stunning physical productions – those of (1) the Théâtre du Capitole de Toulouse/Royal Opera Covent Garden and (2) the Los Angeles and Washington National Operas vying for the attention and affection of American audiences. 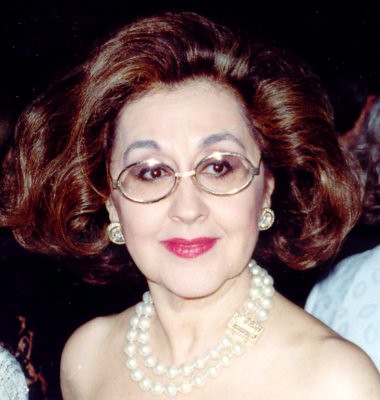 Framed by elegant sets by Designer Michael Scott, the Los Angeles Opera revived Marta Domingo’s unique approach to staging Puccini’s “La Rondine”, which includes not only a different ending for the opera than what must now be regarded as the “mainstream” version, but which transforms the focus of Magda’s relationship with both Rambaldo Fernandez and the young Ruggero.

First presented in Bonn, Germany in 1995, with Ainhoa Arleta as Magda and Marcus Haddock as Ruggero, Domingo’s reconstruction of the opera debuted in the U. S. at the Washington National Opera’s 1997-98 season (with Arleta and Haddock repeating their Bonn roles), and at the Los Angeles Opera in 2000 (again with Haddock, but with Carol Vaness replacing Arleta). It also has been performed at the Opera Theatre of Saint Louis and influenced a production by Opera North in Leeds, England.

Domingo’s vision underscores the reality that any production of  “Rondine” necessarily must come to a conclusion as to Magda’s state of mind when she leaves her role as mistress of a Parisian salon funded by the wealthy Rambaldo Fernandez to indulge in a passionate affair with a young provincial, Ruggero.

Most productions, including Nicolas Joel’s Toulouse production seen in San Francisco, end with Magda leaving Ruggero to return to Rambaldo when she comes to understand that Ruggero expects  her to agree to marry him, then to join him in the provinces to have his children.  Because she has no interest in forsaking Paris for child-rearing in rural France, she realizes that, if she remains with Ruggero, she is interfering with his ability to find a woman who can truly fulfill his dreams and desires.  The break-up is bittersweet, but may resonate with modern audiences who understand the sacredness, in our current way of thinking, of “commitment”.

The Marta Domingo “Rondine” is an entirely different read.  Whereas in the contemporary mainstream productions, the relationship between Rambaldo and Magda simply “is what it is” – a sophisticated Parisian version of a long-term relationship between a wealthy man and an attractive and talented woman – Domingo sees it as a relationship of which she is ashamed and in which she is abused. (“Courtesan” and “kept woman” are terms often used to describe Magda by proponents of the alternate ending.)

In the alternate version, Magda does not break off the affair with Ruggero. Instead, he discovers that she has been another man’s mistress and casts her off in anger.  In despair (and surrounded by stage mist) she walks into the sea, where, presumably she drowns.

The early performance history of “Rondine” showed experimentation on Puccini’s part in trying to reach a satisfactory ending of the opera.  Mme Domingo, who clearly found the mainstream ending unsatisfactory, did a critical analysis of Puccini’s alternative thoughts on how to end the opera, which included an extensive examination of the files of Casa Sanzogno, the opera’s original publishers.  She found sufficient material that had not made (any) final version of the opera to develop her own thoughts on what the opera was about.

Most notably, she discovered, in the Casa Sanzogno archives, Puccini’s unorchestrated composition of a third act Rambaldo-Magda duet, in which she rejects his pleading for her to return. Mme Domingo commissioned orchestration for this previously unstaged scene.

Utilizing as her base, a revised third act that Puccini had authorized for performances in Palermo in 1920, to which she added her newly orchestrated Act III duet, and some additional snippets for the first two acts that illuminated her thesis, she was able to present the scenario that, in Magda’s (and Marta’s) mind, the Rambaldo-Magda relationship was beyond repair.

[Below: Michael Scott’s Act I sets of Magda’s salon; edited image, based on a Robert Millard photograph, courtesy of the Los Angeles Opera.] 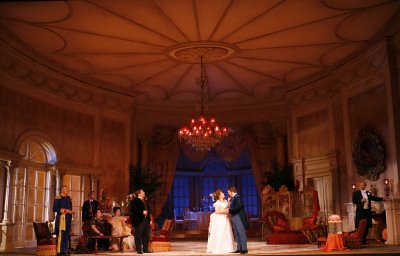 The Los Angeles revival has permitted Californians in 2007-08 to experience two very different takes on an opera many regard as problematic.  Last fall San Francisco Opera presented the mainstream version, starring Angela Gheorghiu and Mischa Didyk in the Toulouse/Covent Garden co-production (which is scheduled to premiere at the Metropolitan Opera on New Years Eve, 2008, marking the Swallow’s return to the Met after more than 70 years have passed).

One can be a partisan of either interpretation and yet find merit in the production that represents “the other side”.  Elsewhere on this website, Nicolas Joel’s Toulouse/Covent Garden production is extolled.  Yet, there is much to admire and appreciate in the Scott/Domingo conception as well.

Scott’s first act set is dominated by a spacious parlor with an ornate ceiling and chandelier in the foreground. Towards the rear of the stage a couple of steps lead to the dining room, dominated by the table around which guests of the salon are dining. Michael Scott’s sets portray a totally believable salon, whose regulars are nicely presented in Domingo’s staging.

We have a fine early impression of the Prunier, character tenor Greg Fedderly (praised in our reviews of his San Francisco Opera performances of Monostatos in Mozart’s “Zauberfloete” and Don Basilio in Mozart’s “Nozze di Figaro”).  The use of David Pittsinger in the role of Rambaldo seems to be luxury casting, even as we become aware of how much larger the role is once Marta Domingo’s discoveries of additional music to augment the character are incorporated into the performances.

[Below: Greg Fedderly as Prunier and Amanda Squitieri as Lisette in Magda’s salon; edited image, based on a Robert Millard photograph, courtesy of Los Angeles Opera.] 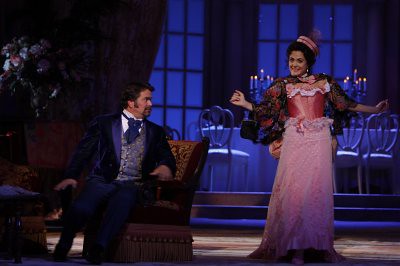 The rapid vibrato that characterizes Patricia Racette’s voice was noticeable (although under her firm control) in the music of her first appearance. Afterwards, as she calibrated her voice to the Los Angeles Music Center, the familiar Racette sound, so appropriate both to the Puccini conversational passages and his expansive lyrical melodies, dominated her performance.

Marcus Haddock’s light lyric tenor was was shown to advantage by his aria Parigi! E la citta dei desideri. Although the aria was deemed an expected cut in most performances for decades, it seems now to be accepted as a worthy addition to Puccini’s score, incorporated into both the Nicolas Joel and Marta Domingo productions.

The principal whom I had not heard before was Amanda Squitieri, the Lisette.  She proved to be have a larger voice than is often assigned to this part, and acted with the pertness and vivaciousness expected of an operatic soubrette.  Squitieri, Fedderly and Pittsinger proved to be as strong a trio in the three “co-starring” roles as one is likely to see.

[Below: Ruggero (Marcus Haddock) waltzes with Magda (Patricia Racette); edited image, based on a Robert Millard photograph, courtesy of the Los Angeles Opera.] 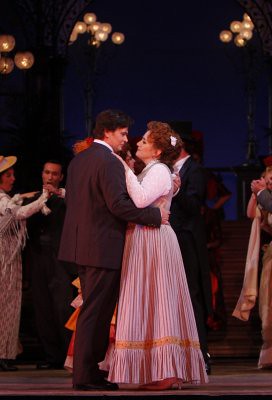 The second act, set in the lively Parisian night spot, Bulliers, is the one that seems to most resemble the Viennese operetta style that those who commissioned the opera originally expected. Puccini provides an abundance of waltz music and a famous brindisi, but Domingo has added cancans, Apache-style dances and other entertainments – choreographed by Kitty McNamee and danced by John Todd and Stephanie Landwehr – that a Belle Epoque pub-crawler might have come across.

Scott’s sets, therefore, have a spacious dance floor at center stage, accessed by stairs leading from a mezzanine, and ringed by rows of tables above the dance floor beneath a circle of elegant glass windows.

Rambaldo’s appearance and confrontation of Magda proved much more sinister than those familiar with the mainstream version would have expected. He strikes her and leaves her weeping, making her especially vulnerable when Ruggero returns to console her.

[Below left: Rambaldo (David Pittsinger) strikes Magda when she tells him she is not returning home; edited image, based on a Robert Millard photograph, courtesy of Los Angeles Opera.] 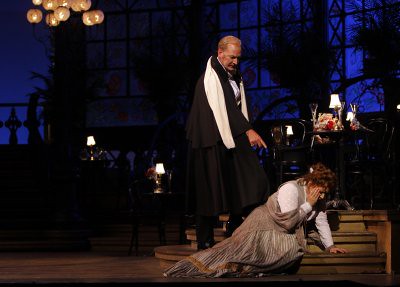 Scott’s third act sets were quite different from the elegant interior scenes of the first two acts. Ruggero and Magda are living in a beach-house on a low cliff above the tides. Smooth boulders are surrounded by a sandy beach, with a serene blue sea beyond it. In a nice touch, as Ruggero begins to explain the contents of his letter to his mother and his wish for them to live near her and raise a family, he kneels next to Magda on the beach, and we have the image of the two kneeling in church for their wedding service. Ruggero leaves, and Prunier and Lisette arrive.

Up until this point, there have been only a couple of hints that this will be a very different end to the opera than one encounters in the mainstream performances. Soon Rambaldo appears and another confrontation with Magda occurs. He leaves her some money. Ruggero returns with a letter that reveals to him that Magda had been Rambaldo’s mistress. He breaks up with her in anger.

After hearing the new duet for Rambaldo and Magda, we return to familiar music, but this in a unfamiliar context. Perhaps opera’s greatest “break-up” duet, which Ruggero begins with Ma come puoi lasciarmi, is begun by Magda instead, to entirely different words. Ruggero shows a vicious streak, and Magda pleads for Ruggero to stay with her. Then, Ruggero rushes off, the mists envelope the stage, and Magda takes off to drown herself.

[Below: Rambaldo (David Pittsinger, left) demands that Magda (Patricia Racette, right) to return with him to Paris; edited image, based on a Robert Millard photograph, courtesy 0f the Los Angeles Opera.] 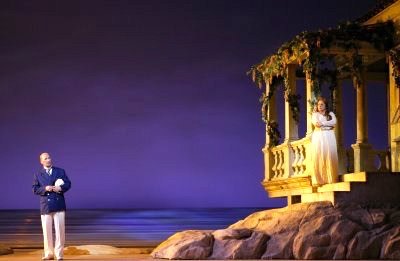 This is my first time attending a performance of the Marta Domingo version of “Rondine”.  The sets are striking, and the artistry is consistently high. Whether or not Domingo’s alternate ending prevails or even endures, she has contributed to the very important debate about Puccini’s intentions, and what we should think about this previously undervalued work.

I recommend that those who have not seen Marta Domingo’s “Rondine” to see it, with the cast she has chosen to perform it in this 150th year of Puccini’s birth.