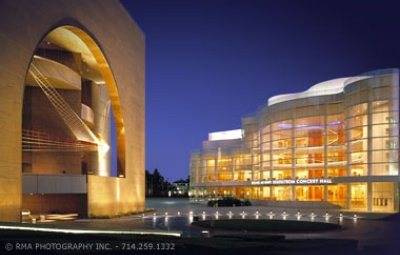 Many California-based opera lovers are discovering the fact that Orange County (the California county whose coastline to the South borders San Diego County and, to the North,  Los Angeles County) now has superb grand opera in a magnificent opera house surrounded by unsurpassed amenities. Your Tipster has resided in Orange County, 17 minutes from the opera house, for 46 years and has enjoyed opera there with Opera Pacific since their Day One!

The principal architect for the very grand Segerstrom Hall (wherein the operas are presented)  was your Tipster’s neighbor for years. Knowing your Tipster’s love of opera and his own, he often discussed the opera house design criteria. It was to accommodate fully the Met’s and New York City Opera’s productions, those of San Francisco Opera, as well as Seattle Opera’s and Chicago Lyric Opera’s also.  And much of that has happened, and more, such as the four operas in Russia’s celebrated Mariinsky Theatre/Kirov production of Wagner’s “Ring of the Nibelungs”, seen in Orange County before the Met saw it.

The performances are at the Orange County Performing Arts Center – www.ocpac.org – which is in Costa Mesa, five minutes from Orange County’s John Wayne International Airport (to book a flight, use symbol SNA). OCPAC is on Town Center Drive, two blocks from its intersection with Bristol Street (north) opposite the famed South Coast Plaza shopping center. 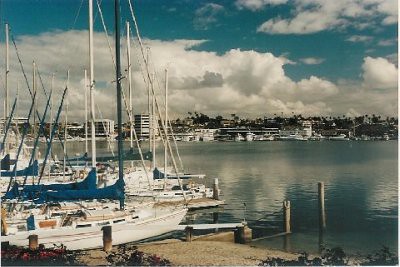 You can’t miss the opera house as you turn east on Town Center Drive coming either north or south on Bristol (this is the best way to get there) where you’ll see a great Arch (on the scale of the Arch of Triumph in Paris – either in Las Vegas or in France!) at the terminus of the street.  Under the Arch are the box offices (park free in the round-about) and the entrances. Tickets at 800 34-OPERA.

If you’re coming north or south on the San Diego Freeway (Interstate 405), get off at Bristol-North and turn right on Town Center Drive. When coming east or west on the Costa Mesa Freeway (State Route 55) get off at MacArthur towards the big buildings (signs indicate “Performing Arts Center”) and go on MacArthur Boulevard to Bristol Street, turning left to Town Center Drive where you turn left again.

Orange County has become very urban of late, meaning lots of heavy traffic. When I first lived here the land now occupied by the Performing Arts Center and South Coast Plaza were bean fields!  Be sure to allow abundant time to get there as the 405 and 55 freeways are jammed almost always in every direction. Sorry about that, but there’s no other realistic way to go!

Parking is close, cheap and convenient (a winning combo): best bet is in the Center Tower Garage structure off Sunflower,  the entrance to which is on the south side of Sunflower. If you’re coming north or south on Bristol Street, turn east on Sunflower and go just past Park Center Drive —  it’s on your right. Equally close is on Park Center Drive itself when you go north from Town Center Drive – entrance to the structure is on your left. There is no option of surface street parking, but you can park free and safely in the gigantic parking lots opening on to Bristol at South Coast Plaza.

[Below left: one of Orange County’s world class shopping centers, Fashion Island in nearby Newport Beach; photograph by Tom.] 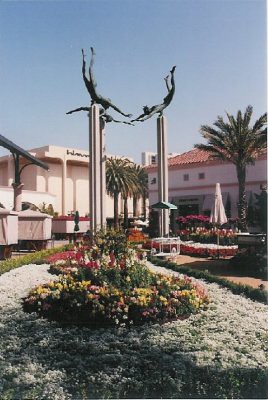 The dining scene is close and convenient. The cultural complex of the Orange County Performing Arts Center is on a “campus” which includes Segerstrom Hall (the opera house), the new Renee & Henry Segerstrom Hall (symphony hall), and the South Coast Repertory Theater (Tony Award playhouse), with a large, leafy park adding to the delight.

Opening on to this park is the Westin South Coast Plaza Hotel (a Starwood Hotel – entrance on the park or 666 Anton Blvd – 714.540.2500). In this very lovely hotel is the very upscale Patina Group “Pinot Provence” – an instant trip to France with wonderful fresh oysters, steamed mussels in wine/garlic/dill sauce, roast duck breast, etc. at 714.444.5900. Booking is imperative on an opera night.

Also on “campus” is Scott’s South Coast Plaza at Bristol North and Anton (NE corner), whose street address is 3300 Bristol Street.  The restaurant is Orange County’s member of San Francisco’s justly celebrated “Scott’s Seafood Bar & Grill” family. Reservations should be made at 714.979.2400. It has the best Petrale sole in Southern California, plus fresh crab, divine oysters, clams, heavenly clam chowder, etc. They offer valet parking ($5) and let you come in after the opera.

Then there’s the new “Market Cafe” in the Renee & Henry Segerstrom Hall (on their performing nights only), operated by the Patina Group (714.429.7650). They have terrific Black Forest ham & Swiss sandwiches on dark rye bread, and a knockout tuna salade nicoise.

In the opera house there is a good (but crowded) bar.  Also, there is a small coffee shop with sandwiches and cookies, which is always very busy, and whose seating is limited.

Just across Bristol in the South Coast Plaza shopping area are many, many restaurants of every variety conceivable. Most require lots of walking and/or driving, but they are convenient and there is a fairly easy walk across a pedestrian bridge that crosses over the six lane Bristol Street, permitting safe access into or from the “campus” park.

Where to Shop, and/or Spend the Weekend

[Below left: the Montage Resort and Spa in Laguna Beach; photograph by Tom.] 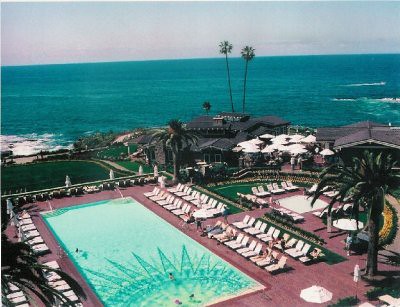 If you want to spend some time before or after the opera, maybe a weekend as noted, you could not surpass for convenience the Westin South Coast Plaza Hotel noted above. Just in back of the opera house is the less pricey Wyndham Hotel at 3350 Avenue of the Arts, 714.751.5100.

If you’d like to spend more on shopping and less on lodging, there’s the affordable Holiday Inn on Bristol just west of the San Diego Freeway a half-mile from South Coast Plaza. But if you want a glamorous vacation, there are abundant offerings in nearby Newport Beach such as the very opulent “Island Hotel” at 690 Newport Center Drive – 949.759,0808 – a 5 Diamond Award “Leading Hotels of the World”, adjacent to supremely elegant, drop-dead ocean view Fashion Island shopping center loaded with fine shops and many, many restaurants.

[Below right: the Saint Regis Resort in Dana Point, a few miles from the Orange County Performing Arts Center; photograph by Tom.] 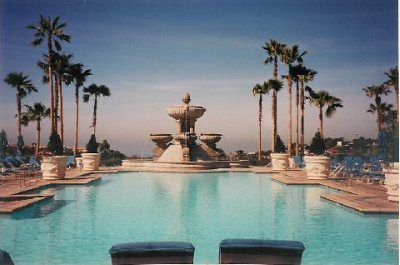 Then, of course, there is the utterly glamorous “Montage” resort in Laguna, the spectacular St Regis, and also the Ritz Carlton resort (caveat: bring money!).

Once again, F.Y.I.: even though we are generous in our praise of these restaurants and lodgings, we neither receive nor accept goodies, tips, etc. The recommendations are from our own personal, favorable experience. Your Tipster has dined at all of these restaurants many times, and knows the hotels well.

Watch for William’s review of the opening night performance of Floyd’s “Susannah” (May 14, 2008) at Opera Pacific, to be posted here soon.