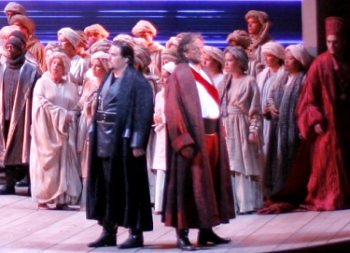 In the previous part of this celebration of Southern California’s 2007-08 Operatic Winter Wonderland, I lauded the Los Angeles Opera’s “Don Giovanni”.  This was followed by the “California Does Wagner” festivities in January, with the Los Angeles Opera performing “Tristan und Isolde” and the San Diego Opera presenting “Tannhauser”.  William’s reviews of these  blockbuster Wagnerian productions may be found on the following pages:

Magic Flute takes Orange County on a toot:  Opera Pacific’s Magic Flute (seen January 31, 2008) was marvelously colorful.  The production was from the San Diego Opera, with costumes by the famous redhead – international designer Zandra Rhodes.  When I note her as a redhead, I refer to her Day-Glo fire engine red hair, which shone when she took a curtain call with an enthusiastic Orange County standing ovation! (See the longer essay on Rhodes in William’s review of her production of Bizet’s “Pearl Fishers” in this website’s  February, 2006 archives.)

Los Angeles County’s homegrown – now international – star, Rodney Gilfrey, made his Opera Pacific debut as a Tarzan Papageno bird-catcher, festooned in green plumage with a huge yellow beak.  He obviously relished the role, which he played with gusto, with superb singing . He also garnered a well-deserved standing ovation.

Nicole Cabell made her company debut as Pamina, brilliantly performing this challenging role – having, after all, to deal with the Queen of the Night, who gets two of the most knock-your-socks-off arias extant (wonderfully sung by Luz de Alba Rubio). When Papageno plays his magic flute and twirls his glockenspiel (which gyrates on the floor, like magic!!), extraordinary animals gradually appear from the background, including two huge stylized yellow lions and a sinister green crocodile sparkling with jewels – as enchanting a musical scene as can be found in any opera!

The sets for this production, created by Michael Hampe and  Alberto Andreis and built by the San Diego Opera Scenic Studio, were world scale – literally – with a huge projection of the planet earth rotating in the firmament in the background, complemented by vast projections of the stars (the Milky Way, suggesting perhaps that the artists should milk this piece for all its worth?  They did so!)

The Queen of the Night arrives from the heavens riding a crescent moon magnificently draped by Zandra Rhodes in a heavenly blue, star-studded raiment.  Our Sarastro was a most authoritative basso, Morris Robinson, possessing the needed gravitas for this role.  The three Genii, dressed in metallic space-suits, arrived from the firmament aboard a glittering metal spaceship!!

As always, conductor (and Opera Pacific Artistic Director) John DeMain gave his singers superb support and treated Orange County to an evening of sublime opera.  How else would you describe Mozart’s masterpiece  “Die Zauberfloete”? Setting it out in the universe, rather than merely here on Mother Earth, was a celestial touch for a truly celestial piece!

An Italian Opera February: Verdi in L. A. ; Donizetti in San Diego

Los Angeles Opera celebrated February with the American debut of English tenor Ian Storey in the title role of Verdi’s “Otello”, the magnificent product of the great composer’s 74th year, based on the Bard’s monumental play, offering every singer a splendid vehicle to show his or her stuff.  Mark Delavan played Otello’s nemesis Iago, the two of them earning tumultuous applause for their famed duet, the Oath of Vengeance, ending Act II.

[Below, In the foreground, left to right, Mark Delavan (Iago) and Ian Storey (Otelloan edited image, based on a copyrighted photograph of Robert Millard, courtesy of the Los Angeles Opera. ).]

Storey, who has recently performed Tristan in Wagner’s “Tristan und Isolde” at Milan’s La Scala and who sings the title roles in Wagner’s “Siegfried” and “Tannhauser”, at a husky 6′ 3″ had an awesome stage presence.  He looked like Otello ought to look. His singing was solid, with a lighter, more lyrical touch.

In the end, it is Iago (Mark Delavan making his company debut) who wins the kudos for this production, with his brilliant singing and stellar acting.  Having planted the seeds of doubt in Otello’s jealous mind regarding the faithfulness of his lady Desdemona (ably sung by Chilean soprano Cristina Gallardo-Domas, making her company debut), Iago’s treachery leads to Desdemona’s murder at Otello’s hand and Otello’s suicide, to some of the darkest, but most glorious music from Verdi’s prolific pen. (Delavan will sing the commanding role of Wotan in San Francisco Opera’s production of Wagner’s “Das Rheingold” this coming June and Amonasro in the Metropolitan Opera’s nationwide cinemacast of Verdi’s “Aida”.)

The co-production with Opera de Monte Carlo and the Royal Theatre of Parma was directed by celebrity-director John Cox, whose work in the States has been seen at the Met, San Francisco Opera, Santa Fe Opera and Chicago Lyric Opera as well. (For a discussion of other of Cox’ work, see William’s March, 2006 review of San Francisco Opera’s Cox production of Mozart’s “Cosi Fan Tutte”.)

(The Los Angeles Times summoned its punsters to greet Storey’s performance of the Moor of Venice with the headline: “An Otello who’s solidly moored”, thereby unleashing the word-play imagination of those in the audience around me.  One patron suggested that Otello is NOT the Italian version of the Greta Garbo-John Barrymore film Grand Hotel, and another suggested that the opera’s name refers to an Italian bank teller. Regrettably, we likely have exceeded this website’s allowance of puns per webpage.)

L. A. Opera Music Director John Conlon held this production together and his brilliant conducting made it work (and behind him was L. A. Opera’s General Director Placido Domingo, who has sung Otello over 120 times!)  All in all, this was a rewarding night of grand opera, displaying a wealth of new talent.

Your website host William recently reviewed San Diego Opera’s opening night of Donizetti’s “Maria Stuarda” [aka Mary Stuart, aka, Mary Queen of Scots] in which one of the two Queens (Mary) was brilliantly sung by Ermonela Jaho as a short-notice replacement for Angela Gilbert.  For William’s review of the opening night performance, see: Jaho, Aldrich Triumph in San Diego “Maria Stuarda” – February 16, 2008.

Since I was scheduled to see a later performance (February 22, 2008) with Gilbert as Maria, William asked that I review that performance.

Gilbert, hailing from South Africa, was an imposing Queen Mary. Having made her 2006 San Diego Opera debut in the title role of its superb production of Donizetti’s “Lucia di Lammermoor”, she proved to be up to the visceral shouting-match confrontation scene, showing great skill as an actress for this highly dramatic role.  As with her Lucia, she could easily handle Donizetti’s piannissimi passages.

[At the left, an edited image, based on a photograph by Cory Weaver, courtesy of the San Diego Opera, shows Angela Gilbert (Mary) in her Act III prayer, with Reinhard Hagen (Cecil) behind her. ] 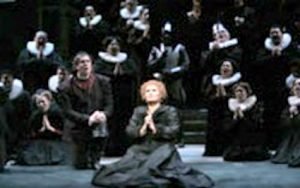 According to tradition, the Bard was a young man in his twenties when Elizabeth I sent Mary Queen of Scots to the scaffold, which must have been one of the most compelling dramas in the Bard’s life, but obviously too hot to handle with his laser-sharp playwright skills at that time.  But when a marvelous bronze bust of him was unveiled at San Diego’s Old Globe Theatre in Balboa Park, who did the unveiling?  The Real Queen: the direct descendent of the Tudor family that produced Mary and Elizabeth I – Great Britain’s Elizabeth II.  Although she is known to have seen this opera in England, we have not  been vouchsafed with her inner thoughts about Donizetti’s skills as operatic docudramatist.

As a final thought, in this opera company in which both Beverly Sills and Luciano Pavarotti have appeared, in this year where both great bel canto artists are mourned, it is satisfying to be able to see artists such as Ermolena Jaho and Angela Gilbert, able to carry on the traditions of glorious singing.  All opera lovers must support and nurture this talented new generation of artists.

For the conclusion of this series, see:  Winter of Content Part III – the Santa Barbara Italian Passions Festival.