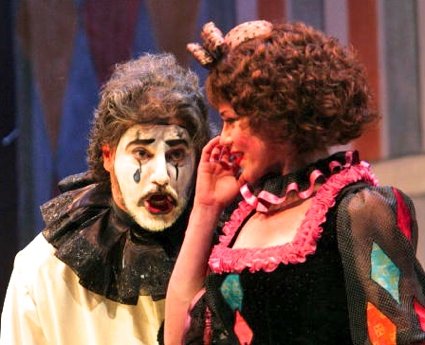 San Diego Opera, which began the evening of March 22nd with an imaginative new production of Mascagni’s “Cavalleria Rusticana” followed with a new production, starring Jose Cura and Elizabeth Futral, of, “I Pagliacci”, the only truly successful opera of Ruggero Leoncavallo. 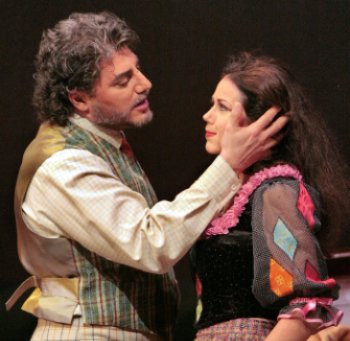 Leoncavallo, a Neapolitan only two years’ Giocomo Puccini’s senior, had great ambitions as an operatic composer, which included such ideas as composing the Italian multi-opera response to Wagner’s “Ring of the Nibelungs” with dramatic material drawn from the lives of the Medici. He even conceived the idea of adapting Henri Murger’s novel “La Boheme” to opera and was infuriated when Puccini told him he planned to do the same thing.

However, the adjective “almost” allows room for an exception to this rather bleak assessment of his legacy.  That exception was a short opera, “I Pagliacci”, less than one hour and a quarter in length, that became one of the most successful operas ever written. Its great tenor aria Vesti la giubba, performed by Enrico Caruso, is thought to be the world’s first million-selling record. In fact, “I Pagliacci”, Caruso, and the classical phonograph record industry each helped advance the fortunes of the other two.

[Below: Nedda (Elizabeth Futral, left) has found a new lover in Silvio (Scott Hendricks, right); edited image, based on a Ken Howard photograph, courtesy of the San Diego Opera.] 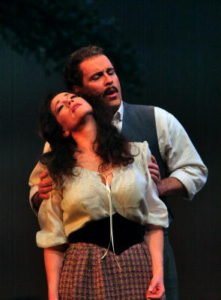 Although it is hard these days to consider Leoncavallo as an Italian equivalent of Wagner, he shared with the German master the determination that by being his own librettist, he would have complete artistic control over his products.

Thus, he produced works that were totally his conception, rather than a collaboration with a librettist, who, especially in early 19th century Italy, might consider himself as the more important part of the team who created the opera. In fact, it was frequently the practice of an opera company impresario simply to provide a completed libretto to the composer, asking him to write the music after the fact, as composers for the movies are typically asked to do.

To paraphrase Andy Warhol’s pop culture maxim, not every opera composer can boast an hour and 15 minutes of fame, and it is remarkable how such a short work provides such a vivid dramatic experience.

What happens in that hour and a quarter? A player (Tonio) in a troupe of actors touring in rural Italy steps in front of the opera curtain to tell the audience that one must remember that the actors in the play are humans with real feelings.

We meet the troop of players and are warned by Canio, the leading clown, that one should not joke about the fidelity of his woman, Nedda.But we learn also that she is fearful of Canio’s jealousy and abusiveness, and is restless to get out of the situation to establish a calmer and less dangerous relationship with Silvio.

Tonio makes a pass at her, is rejected, spies on Nedda’s tryst with Silvio, and in spite alerts Canio, whose is determined to kill his rival. Another actor suggests that the show (about a woman’s infidelity to her mate) go on regardless. In the play the enraged Canio cannot control his anger while acting his part. When a frightened Silvio tries to defend Nedda, Canio murders him.

Thus, Leoncavallo with great economy presents a seemingly timeless story, whose actual derivation was based on a real life occurrence adjudicated in a court of law by the composer’s jurist father. Note the previous discussions on this website of real life court cases that ultimately inspired the characters of Wozzeck and Marie in Berg’s “Wozzeck” and Marguerite in Gounod’s “Faust”. But these other examples were derived from intermediary works of, respectively, author/dramatists Georg Buechner and Johann Goethe. “Pagliacci” came directly out of the lore of the Leoncavallo family itself, whose creation as an opera was wholly the inspiration of that family’s most famous son.

San Diego Opera’s new production, performed 116 years after the “Pagliacci” premiere, has sets designed by John Coyne and stage direction by Lotfi Mansouri. Some “concept directors” have seemed to wish to “animate” operas by imposing ideas on them for which no clues exist in the original work. The Mansouri-Coyne collaboration clearly has bonded with Leoncavallo and trusts the composer-librettist’s intentions. Thus we get an unfiltered conceptualization of what opera-goers for almost 12 decades have found to admire in the work.

There are four star roles and one important character part in “I Pagliacci”. San Diego Opera took great care in assembling a cast worthy of this serious new production.

One star role, Canio, properly cast, dominates the performance. Argentinian Jose Cura, now in his mid-40s, proved to be an extraordinary performer. (He also proved to have a couple of virtuoso moves on the bass drum; few Canios show any remarkable skills as percussionists.)

[Below: Canio (Jose Cura, left) demands Nedda (Elizabeth Futral, right) to admit to her infidelity; edited image, based on a Ken Howard photograph, courtesy of the San Diego Opera.] 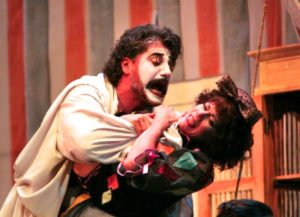 In my experience, (which includes the great Bolshoi star Vladimir Atlantov, James King and Ermanno Mauro as the pagliaccio) only Placido Domingo, whom I saw as Canio (double-billed with the Domingo Turiddu in Mascagni’s “Cavalleria Rusticana” in San Francisco Opera performances in 1976) was as memorable as Cura in this role. Unlike Domingo, Atlantov, King and Mauro, Cura himself has not performed in an opera at the San Francisco’s War Memorial Opera House.

In his only season with San Francisco Opera, he was Don Jose to Olga Borodina’s Carmen in the popular Bizet opera, when earthquake repairs forced the Opera to move into makeshift surroundings.Even then, almost a dozen years ago, Cura seemed destined to be a great dramatic tenor (a “tenor of force”)  and I have always regretted whatever circumstances have kept him from returning to the San Francisco Opera.

This evening, to my great pleasure, I was experiencing Cura singing in the San Diego Civic Theatre, five blocks from the theatre in which, 49 years ago, I first encountered a true tenore di forza, Mario Del Monaco, in the title role of the first performance I ever attended of Verdi’s “Otello”.

Cura’s voice, of course, differs in important ways from Del Monaco’s, but from the standpoint of the audience, there is a rush one feels when large voices of this degree of resonance and dramatic intensity, perform roles, such as Canio and Otello, that push the tenor voice to highest demands of the core Italian repertory. To accentuate this performance’s obvious associations with the the performance tradition of the work, Cura wore a costume based on a costume originally worn by Enrico Caruso.

Elizabeth Futral has sung with both the San Francisco and San Diego Opera companies, but, up until now it was only in the role of Stella in Andre Previn’s “A Streetcar Named Desire”.However, her principal reputation has not been the contemporary repertory, but in the traditional roles sung by coloratura sopranos – including signing on as one of the major artists keeping the spark of life in currently underperformed treasures of the French repertory, such as the title role of Delibes’ fascinating opera “Lakme”.

[Below: Nedda (Elizabeth Futral, right), despite an ominous feeling about the anger that Canio (Jose Cura, left) exhibits, attempts to stay in character; edited image, based on a Ken Howard photograph, courtesy of the San Diego Opera.] 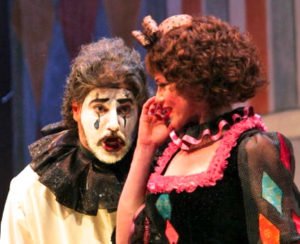 When we think of coloratura sopranos, we usually think of the fireworks of trills and cadenzas like Lakme’s Bell Song, or the finale of the Mad Scene in Donizetti’s “Lucia di Lammermoor”.But all of the great coloratura roles – Lakme and Lucia are textbook cases – require mastery of the long, beautifully constructed legato passages that comprise most of those parts.

Nedda’s coloratura requirements although minimalist, do exist, but Futral showed that it is that other obligation of great coloratura sopranos – the expressive legato line – that can  be the most important element of a great performance as Nedda.

Silvio, Nedda’s boyfriend on the side, is blessed with some of the greatest love music in opera, even though Silvio is only the secondo uomo of the opera’s two baritones. Skillfully performed by Scott Hendricks, it further confirmed the trust one has in San Diego Opera General Director Ian Campbell’s skill at casting voices appropriate to each part.

[Below: Tonio (Bruno Caproni, left) reveals to Nedda (Elizabeth Futral, right) that he has feelings for her; edited image, based on a Ken Howard photograph, courtesy of the San Diego Opera.] 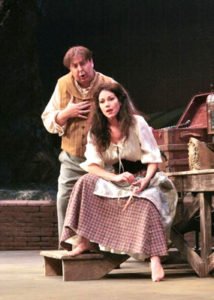 The principal baritone, Bruno Caproni, was the only “Pagliacci” cast member to have sung in the earlier “Cavalleria Rusticana” (reviewed separately on this website). I had never seen him before, but in both operas he sounded to be good form, especially in Tonio’s great pre-curtain prologue, but within the next day or two he had to announce his withdrawal from the second performance because of illness.

The principal character tenor role is that of Beppe, the only character in the opera not known to engage in behavior inconsistent with the spirit of the Ten Commandments. The role is often played by a “character tenor”, and sometimes is one of the stepping stone roles at the beginning of a tenor’s career. For the record, a fine impression was made by Simeon Esper, who had been seen earlier as one of the Minnesingers in the San Diego Opera “Tannhauser”.

[Below: the John Coyne set for the San Diego Opera production of “I Pagliacci”; edited image, based on a photograph by John Coyne, and used with his permission.] 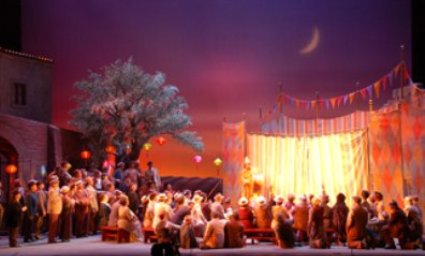 Coyne’s sets, unlike those of the new production of “Cavalleria Rusticana” seen earlier in the evening, emphasized a village open space that, in the second act, was to be the locus of the festivities associated with the theatrical performance, decorated with Japanese lanterns and a makeshift stage. The sets facilitated the onstage action, which included the audience to the play, whose reactions were an important contribution to the drama.

Conductor Edoardo Mueller proved to be the master of yet another mainstream Italian opera production, and all of the other members of the San Diego Opera cast ande crew must be commended for a seamless performance.

For those who sought a effective presentation of “I Pagliacci”, performed in a manner that preserved performance traditions that would have likely won the support of the opera’s composer-librettist, and with a star that has to be listed among the millenium’s most important tenors, the San Diego Opera new production would surely have met these criteria.