The operawarhorses.com has received a very favorable response for our Tom’s Tips for enjoying opera in Los Angeles and San Diego. Thus, we will provide similar information for a venue we have not yet highlighted – Opera Santa Barbara! 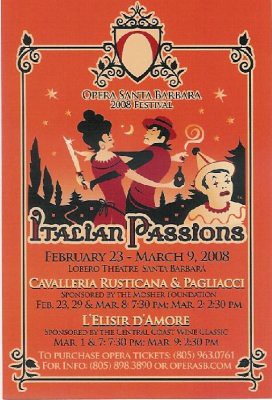 Conductor Valery Ryvkin, whose fine conducting we noted for the San Diego Opera’s presentation of Mussorgsky’s “Boris Godounov” will conduct all three operas. Young casts, which include singers who have been praised already on this website, will appear. Allan Glassman will sing both of the “Cav/Pag” tenor roles, Turiddu and Canio; Malcolm MacKenzie both “Cav/Pag” baritone roles Alfio and Tonio. (This website will feature a “California Does Cav and Pag” post, highlighting the Santa Barbara and San Diego Opera double bills of February and March 2008). Robert McPherson, whom we noted for an excellent performance of the Italian Tenor in Strauss’ “Der Rosenkavalier” last June at San Francisco, is Santa Barbara’s Nemorino in “L’Elisir”.

For those seeking high-quality opera performances in different venues, one would be hard-pressed to find a more lovely site than Santa Barbara, which has enjoyed really excellent opera for years. The operas will be presented in the opera house of one of the most attractive small cities on the entire West Coast, appropriately dubbed California’s Riviera. Indeed, with its Portofino-like appearance, Italian Riviera ambience, beaches, Mediterranean climate and architecture, it looks it!

This year Opera Santa Barbara presents a screamingly-funny comedy, Donizetti’s Elixir of Love and the glorious music of the famed double bill of Cavalleria Rusticana and I Pagliacci. These will run in rotation from February 23 through March 9 at the Lobero Theatre in Downtown Santa Barbara on the Northwest corner of Anacapa and Canon Perdido. (The street address is 330 Canon Perdido. Tickets are available through 805.898.3890 and through the website www.OperaSB.com.)

Your Tipster has worked in Santa Barbara intermittently for 45 years, and certainly has enjoyed opera there for many happy years. Opera Santa Barbara has the advantage of the most able assistance of Met and San Francisco Opera star mezzo-soprano Marilyn Horne, now a beloved local resident, as was the chef Julia Child.

Getting There. The only real option for driving to Santa Barbara is to follow the highly scenic Highway 101, getting off on State Street and heading towards the mountains. Turn right on Canon Perdido and go one block — the Lobero Theatre is on your left. Best parking is to the rear of the theater, on the Southwest corner of Anacapa and Carrillo. Surface street parking is abundant and safe.

Amtrak (website, www.Amtrak.com) offers fine rail service from as far North as Oakland and as far South as San Diego. The Amtrak stop is a block north of State Street. From there you can get to the opera house and its adjacent restaurants by a taxi ride of just a bit over a mile.

Dining Choices (Within Walking Distance). Everything you want is within very easy walking distance in an area with wonderful Mediterranean ambience. A block away is the aptly-named Intermezzo Restaurant 813 Anacapa (telephone 805.966.9463) which is in the marvelous old complex of El Paseo, at Anacapa and De La Guerra, whose history dates from when Santa Barbara was a Spanish colony. Intermezzo serves light, bistro-style cuisine in a most congenial setting. They are part of the Wine Cask group, presenting a full menu and more than 40 selections of open wines. Their adjacent wine shop, The Wine Cask Wine Store, is one of California’s best. My favorite restaurant in the area is The Wine Cask at the same location and telephone number. On several occasions when I dined there, Julia Child and her ebullient entourage were enjoying a most festive, wine-oriented dinner! Its main dining is in a very beautiful 1800s room with fireplace (also terrific outdoors dining in the restaurant’s courtyard), with a great bar and true gourmet dining. It is on my list of the five best California restaurants. Their wine list boasts more than 1,000 selections! 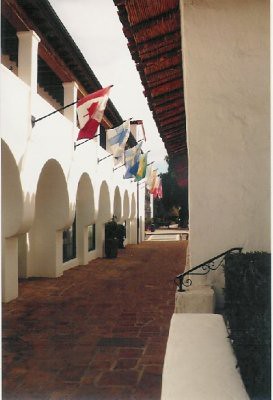 Also in the historic El Paseo complex is the El Paseo Restaurant, reeking with Spanish-days charm, serving in the California-Mexican tradition, having been a restaurant since 1826! You will not be the only dignitary to have dined there – you’ve been preceded by such celebrities as Clark Gable, Carole Lombard, Ginger Rogers, Fred Astaire, Katherine Hepburn, Howard Hughes, Salvador Dali, Will Rogers, Charles Lindbergh – you get the point. Their address is #10 El Paseo (telephone 805.962.6050). For atmosphere, it is unsurpassed. The Lobero Theatre site also offers courtyard lunch and dinner for those who may not want to stray too far from the opera house!

Dining Choices (Transportation Required). If you’re driving (really the best way to go to thoroughly enjoy this gorgeous area), there are several more restaurants worthy of note but some distance away. The Bella Vista restaurant and the main dining room at The Santa Barbara Biltmore (a Four Seasons resort) in Montecito (805.969.2261) are sensational, overlooking the ocean and the Channel islands. Surrounded by acres of immaculate, lush gardens in the extensive environs of the Biltmore, this surely is one of California’s most attractive resorts. Just get off the 101 freeway south of Santa Barbara at Olive Mill Road heading towards the ocean – it’s on your right at Channel (1260 Channel Drive), fronting the ocean. The same cast of stars noted above also have enjoyed The Biltmore, as do the new stars too! Their bar is magnificent – without equal between San Francisco and Los Angeles.

A more moderately priced dining choice is at the bottom of State Street on Stearns Wharf – the pier going out over the ocean. This is the Harbor Restaurant on the water with a spectacular view of Santa Barbara, featuring first-class seafood. I’ve dined here countless times – 805.963.3311.

Lodging. I’ve just noted the Santa Barbara Biltmore – it doesn’t get better than this between L.A. and Monterey, but it’s pricey. All of the major chains have properties in the area, but one very affordable recommendation in Santa Barbara which I’ve often enjoyed is next to the famed Sansum Medical Clinic – the Encina Lodge on the Northwest corner of Bath Street and Puebla just minutes from the opera, at 800.526.2282. They have a good restaurant for breakfast, fine pool area and even an aviary !

Local Amenities. Minutes away from the opera, in case you have time, is the elegant Santa Barbara Museum of Art at 1130 State Street (at Anapamu) featuring World-class objects worthy of a major city. A block east on Anapamu is the justly celebrated and landmark Santa Barbara Courthouse – unlike any courthouse you’ve ever seen. This is where most civic events take place – on the extensive surrounding grounds. Don’t miss the spectacular, mural-covered Council Chamber inside. 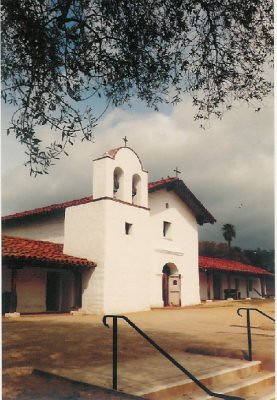 Across State Street from the El Paseo is a large and attractive Mediterranean-style flower and fountain filled shopping/restaurant/boutique district — the Paseo Nuevo in the 700 and 800 block of State. What you might need is in there! Santa Barbara (and Montecito) are filled with fine art galleries worthy of this city having a most spacious cultural heritage dating to the days when the flag of Imperial Spain flew over El Presidio, the last Spanish outpost in America (started in 1782), across the street from the Lobero Theatre on the Northeast corner of Anacapa and Canon Perdido – very much worth a visit. 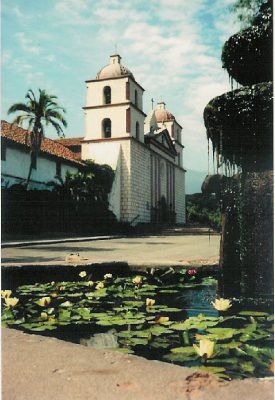 And, of course, since you’re in Santa Barbara, how could you think of not visiting the Queen of the Missions (founded 1786) at the top of Laguna Street at Mission Street? The missions don’t get better than this! That is, unless you like fine wines even more than the missions. The Santa Barbara wine country is less than an hour away on a wildly scenic drive over San Marcos Pass and past seven-mile-long Lake Cachuma (just 24 miles from downtown!) on Highway 154 to Los Olivos – a charmer of a quaint village with good restaurants, including Mattei’s Tavern 805.688.4820, since 1886, with many art galleries and wine-tastings nearby. In the surrounding hills are a great many wineries beckoning your visit – every bit the equal of California’s Napa Valley (and a lot fewer tourist buses!). Solvang, America’s Danish capital – outdoing Carmel itself in trying to look like Carmel, is just 34 miles from downtown.

[Below left: the Los Olivos Tavern, photograph by Tom.] 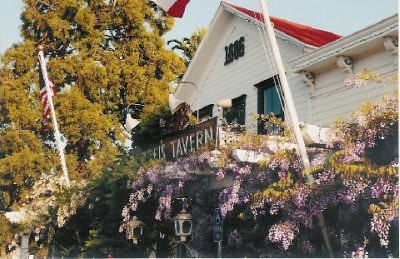 One last destination on the way from Santa Barbara to Los Olivos is one of the most unique, olde–time, log-cabin style restaurants in California, in the forest, with wood fireplaces, and incredibly cozy – Cold Spring Tavern at 5995 Stagecoach Road at 805.967.0066 (it had been a stage stop). Get the directions from them – on your way you’ve literally almost driven over their roof. You get off Highway 154 at Stagecoach Road heading west – it’s at the bottom of the grade – very much worth the effort.