In the last post on this website, we presented Tom’s Tips for opera lovers looking to enjoy performances of the Los Angeles Opera at the Dorothy Chandler Pavilion.  Now we want to encourage you to consider the San Diego Opera performances at the San Diego Civic Theater in the Continental United States’ Southwestern metropolis.

[Below: the San Diego Civic Theater, photograph by Tom Rubbert.] 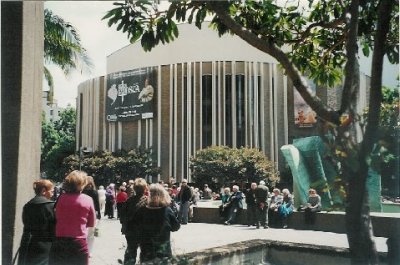 Your Tipster frequently practices law in San Diego, often for extended time-frames, and has been attending the San Diego Opera for decades.  The traffic and dining scenes have dramatically changed in recent years.  Here are some very current suggestions and recommendations.

Traveling by automobile: If you are driving down from the Los Angeles or Orange County areas, be sure to allow plenty of time for heavy southbound traffic on weekdays.  (Traffic is often heavy on weekends also.)  There are two freeways from the Greater L. A. area – the San Diego Freeway (Interstate 405, which merges with Interstate 5 in Orange County) and the more Easterly (and usually much faster) Interstate 15.

[Below: one of the many scenic spots in San Diego’s Balboa Park, evocative of Southern Spain; photograph by Tom Rubbert.] 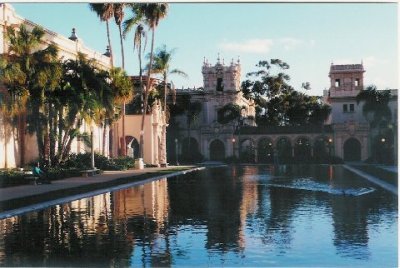 There is excellent valet parking under the Westgate Plaza Hotel, directly across C Street, which is to the rear of the Civic Theatre in which the operas are presented.  The Westgate’s formal entrance is at 1055 2nd Avenue at C Street.  (Telephone 800.221.3802).

Tom strongly advises against parking on surface streets in San Diego or any large urban area.

Public Transportation (Local): If you do not wish to drive into Downtown San Diego, consider taking “The Trolley”, the bright red streetcar trains which stop on C Street directly in back of the opera house and at the Westgate Hotel’s door!  It can be boarded at the Broadway Santa Fe Station, where the Amtrak trains, discussed below, stop.

Public Transportation (Inter-urban): For those who do not relish the drive from the L. A. area, try Amtrak’s Pacific Surfliner (www.Amtrak.com), that travels from San Luis Obispo, Santa Barbara, Los Angeles, and several Orange County Amtrak stations (Fullerton, Santa Ana, Irvine, San Juan Capistrano).  The Surfliner ends in San Diego at the Santa Fe Station, noted above, opposite the San Diego Museum of Modern Art.  This is is how your Tipster often travels between L. A. and San Diego.

Note: San Diego Opera and Amtrak offer a promotional code that permits an S. D. Opera performance ticket holder to receive a free companion fare ticket with purchase of an Amtrak ticket for the Surfliner and other California Amtrak trains. Call San Diego Opera at 619.533.7000 to obtain further information.

[Below: a view of the waterfront hotels located a few blocks South of the San Diego Civic Theatre; photograph by Tom Rubbert.] 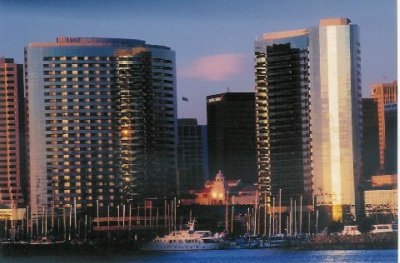 But, a word of caution: because the last train out is at 9:15 p.m., except for matinee performances, plan for a stayover in San Diego. See the hotel suggestions below, or, alternatively, some less expensive alternatives listed on the www.sdopera.com website. There is enough to do in San Diego to spend the weekend.

The beautfiulWestgate Hotel is located right across C street from the Civic Theater.  On the Westgate Hotel’s ground level is the Le Grand Cafe, which is set in an exquisite room, and has a special pre-opera menu to cater directly to the opera crowd. Ian Campbell, General Director of the San Diego Opera, is often seen at dinner here before productions (as, of course, is Tom).

The Westgate features an incomparable Afternoon Tea (with crust-less sandwiches, scones, etc. like the Brit’s “high tea”) served in the lavish lobby.  It is lovely and grande prelude to an evening at the opera, which takes place literally across the street.  Tom highly recommends this delight!

Also very nearby the Civic Theater is another quite upscale venue for dinner – the Grant Grill in the historic U. S. Grant Hotel (across the street from the Westgate).  It has wonderful dark wood paneling like the Edwardian Room in New York’s venerable Plaza Hotel, and the dining is truly excellent.  (It is at 326 Broadway, telephone 619.232.3121.)

If you wish to feel you are on an instant trip abroad to Spain, try the The Prado at Balboa Park.  The restaurant is on Balboa Park’s magnificent central square presided over by the great bronze of El Cid on horseback, which will remind you of Madrid or Barcelona.  The restaurant has a valet service out front and free parking in the square.  The best garlic/wine/butter/dill sauce steamed clams in California are found here!

[Below: the statue of El Cid Campeador in nearby Balboa Park’s El Prado, with the House of Hospitality in background; photograph by Tom Rubbert.] 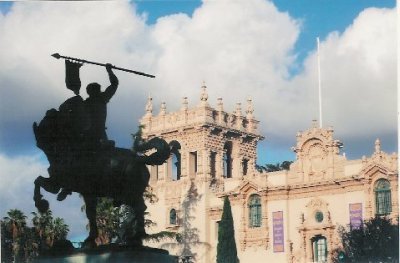 Museum Browsing: You can profitably spend the afternoon in the adjacent San Diego Museum of Art and Timken Gallery, both featuring incredible masterwork paintings by Goya, El Greco, Zurburan, and other fine art attractions.

Distinctive Area Hotels: Although virtually all of the major hotel companies have properties in San Diego, there are several hotels of particular distinction that should be considered by those traveling here.

The Westgate (www.Westgatehotel.com), whose dining facilities we have already recommended, is one of the grandest hotels on the West Coast.  It is very French in style. The rooms at the Westgate are spacious and opulent, and start at atound $269, about the same as the U. S. Grant Hotel next door.

[Below: a view of the Hotel Del Coronado; resized image of a promotional photograph.] 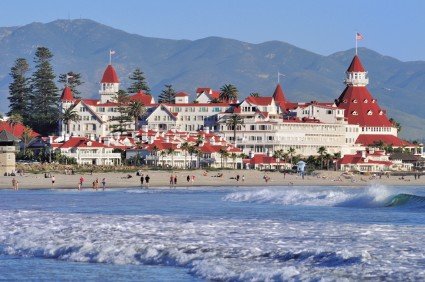 The famed Hotel Del Coronado across the Bay Bridge on Coronado Island is a destination in itself, with its fabulous beaches, tennis, sun decks and dining (www.HotelDel.com or telephone 800-HOTELDEL).

And last, but no means least, is La Jolla’s fabulous Valencia Hotel on Prospect, with a marvelous dining room and bar, located in an area surrounded by wonderful art galleries, shops and restaurants.  (Don’t miss The Top of the Cove Restaurant at 1216 Prospect Street.)

The quite marvelous La Valencia Resort has commanded La Jolla’s best view since 1926 and has hosted such celebrities as Greta Garbo, Mary Pickford and Douglas Fairbanks. 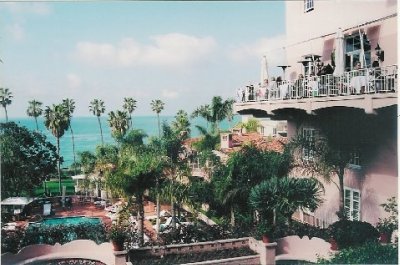 The resort features one of the San Diego Area’s best dining rooms, the Sky Room (an American Automobile Association four diamond awardee), whose drop dead view is certainly one of San Diego’s most beautiful vistas.  La Valencia is at 1132 Prospect (on La Jolla’s principal street) at 858.454.0771.

As stated in Part I of this post, despite the lavish praise we give to restaurants we like, we do not seek or accept remuneration or other considerations from them.  Our recommendations are based solely on personal, favorable experiences.

See also: Tom’s Tips for the L. A. and San Diego Opera Scenes, Part I