In the spirit of New Year’s Eve, I am posting Tom’s report of an extravagant production of Webber’s “Phantom of the Opera” in Las Vegas:

Superlative: “Phantom” in Las Vegas surpasses any “Phantom” Production, Ever

Andrew Lloyd Webber’s “The Phantom of the Opera” opened in London in 1987, starring Michael Crawford as the Phantom and Webber’s then-wife Sarah Brightman. By now, nearly everyone has seen a production in some city in the world. However, none of these stage productions remotely compares to the new production in Las Vegas, produced by the now beknighted Sir Andrew Lloyd Webber and again directed by its original director, Harold Prince.

Prince, who turns 80 in the new year, has several important operatic productions in his resume that have graced the stages of the Met, San Francisco Opera, Lyric Opera of Chicago, Houston Grand Opera, Dallas Opera, Los Angeles Opera and elsewhere in the world’s opera capitals. But his principal reputation, of course, is in the musical theatre, with 21 Tony awards (the all time record!) that go back to “The Pajama Game” (1955) and encompass his famous collaborations with Stephen Sondheim (including “Company”, “A Little Night Music” and “Sweeney Todd”) and Webber (“Evita”, as well as “Phantom”).

[Below left: the Venetian Hotel in Las Vegas, which hosts a lavish production of Webber’s “Phantom of the Opera”; photograph by Tom.] 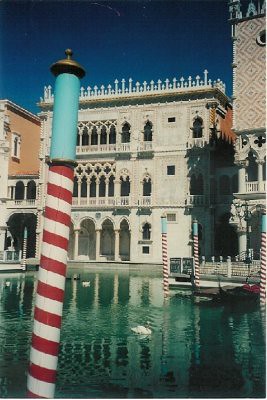 For the glitz capital of the world, something very special was called for, since the production has to compete with over-the-top productions of every other great Vegas show. These include five Cirque de Soleil shows: the overwhelming water spectacle “O” (which receives four stars out of four from Tom), “Mystere” (two Tom stars), “Ka” (three Tom stars), “Zumanity” and “Beatles Love” (two Tom stars). Other shows drawing big crowds include Monty Python’s “Spamalot” (two Tom stars), “The Producers” and “Mamma Mia!”.

After all, not all of us come to Lost Wages to lose wallet-weight in the slots or at the tables! In that proverbial “nutshell”, Sin City now has some of the best shows and best restaurants in the world, where colossal new mega-billion dollar hotels and casinos are rising every day of the year, each outdoing its predecessors. Some of us thought the magnificent Bellagio was the apogee – but it’s not anymore!

As those who have seen it already know, “Phantom” truly is an opera in every regard, with a plot, full orchestra, solos, duets, multiple arias, choral numbers, a ballet, and set changes. It is well known that Sir Andrew loves opera, especially Puccini. But as the creator of “Jesus Christ Superstar”, “Cats”, “Sunset Boulevard”, “Aspects of Love” and “Evita”, his talents go to places far beyond the traditional opera genre.

I have seen “Phantom” four times in London, at least once in New York City, Los Angeles, San Francisco, Seattle and Orange County, and now three times in Las Vegas. I saw my first “Phantom” within a week of its opening in London, where the concierge at the tres chic Stafford Hotel was able to get us great seats for that very evening, for a price, but my seats were at the rear of the house with a compromised view. But I will never forget that London performance, nor will anyone who sees the new production in Las Vegas.

[Below right: “Phantom” banners fly in the hallway of the Venetian Hotel in Las Vegas, leading to the performance site; photograph by Tom.] 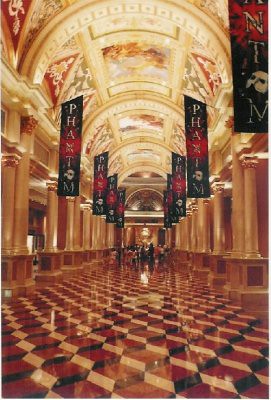 The Las Vegas “Phantom” shows each night at 7 p.m. at the Venetian, in a specially constructed opera house created to resemble the interior of the Paris Opera House designed by the great architect Garnier (hence the Parisians’ name for that landmark), in or under which all of the action takes place.

The live audience is surrounded by mannequins, representing extravagantly dressed opera patrons in circa 1911 evening clothes. The golden architectural artwork surrounding and surmounting the stage is literally stupendous.

As one would expect (but much more so in this venue), the famed just-auctioned-off chandelier takes off from under its tarpaulin onstage to the top of the theater as the thunderous music begins. Believe me, if you don’t think you are in for an evening of world class entertainment, think again! The sets and costumes are unsurpassed. The scene in which the “Phantom” rows his beloved into the watery catacombs underlying the Garnier, as the illuminated torchers arise from the waters as the great organ slides in from stage right, is an utter blockbuster.

I suspect many reading this have the “Music of the Night” resounding in their ears now as I do – but isn’t that what a great opera aria should do, like in Act I of Puccini’s “La Boheme” when Rodolfo and Mimi express their love, or in the tragic ending scene of Verdi’s “La Traviata” as the heroine sings her last before collapsing?

The fast moving action onstage is truly incredible for its precision and imagination. At one point a full stage view of the illuminated Garnier Opera House appears. The Masquerade scene is a true coup de theatre. Everyone in the cast is excellent, without exception, as one would anticipate, since the cast and stage crew have performed this piece six times a week for more than a year – well beyond the rehearsal time most opera are able to allot. The lead roles change intermittently, but having seen it now three times, all cast members have been superb.

There is no opera house in the world with the machinery adequate to replicate this floor show – the set changes and stage action surpass any production of opera, ballet or theatrical presentation (except, of course, in Las Vegas) I have seen in my decades of opera-, ballet- and theater-going throughout the world. Is it a gaffe for me to say it doesn’t get better than this?

“Phantom” ends in a tear-jerking scene as the unmasked, grotesque-faced Phantom must surrender his beloved to her young, dashing suitor. Let me, using my trial lawyer summation skills, sum it up: from a production standpoint, considering the sets, the costumes, the action, and the drama appropriate to the piece, I have never seen anything better than this anywhere. End of speech!

Sit as close to the front orchestra as you can get. Telephone 702.414.9000 or access www.PhantomLasVegas.com.

This shouldn’t be the end of your evening. You are out of the theater just in time for a 9:00 p.m. dinner. There are three world class restaurants right in the Venetian complex, including the Las Vegas Bouchon (702.414.6200) of superchef Thomas Keller (aka The French Laundry and Bouchon in Yountville, California and Per Se in New York City), Joachim Splichal’s Pinot Brasserie and Wolfgang Puck’s Postrio. For your convenience, there are ranks of slots and tables to absorb whatever loose change might be left in your otherwise empty wallet or purse.