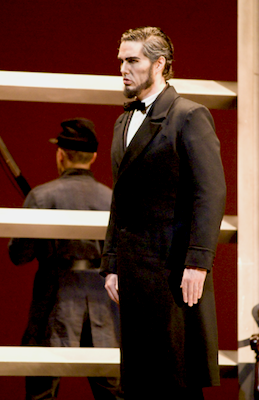 William and I were both present at the October 14th matinee of the San Francisco Opera production of Philip Glass’ “Appomattox”, recounting the end of the American Civil War.  It was presented in the War Memorial Opera House, itself built to commemorate the end of World War I – the War to end all Wars.

This epic-proportioned opera, sensational in its conception, drama and music, had one sitting on the edge of one’s opera seat being witness to history, for this colossal work encompassed so much history up the present day, in a way no other opera has done so well.  In its world premiere performance under San Francisco Opera General Director David Gockley’s leadership, San Francisco audiences were treated to an utterly smashing, wildly dramatic in-your-face docu-opera.

Glass’ “Appomattox” focused on one of the most momentous scenes America has ever seen – General Robert E. Lee surrendering to General Ulysses S. Grant at Appomattox, Virginia.  Brilliantly conducted by Dennis Russell Davies, the curtain has barely risen, before one is confronted with a pageantry and sweep, bringing to mind a parallel docu-opera seen at S. F. Opera over a decade and half earlier – Prokofiev’s “War and Peace”, conceptualized and conducted by Valery Gergiev in 1991.

“Appomattox” barely gets moving when the gut-wrenching spectacle arrives of blood-soaked medical assistants wheeling out push-carts full of soldiers’ amputated body parts, which are pitched into the earth.  The music throughout the first act is lush, very dark, powerful, Wagnerian in its drama and color-palette, not just “arpeggios” as some critics are wont to say of other Glass music.

Abraham Lincoln meets with General Grant and his aides aboard Lincoln’s headquarters barge on the Potomoc.  An aide rushes in with battle news favorable to the Union Army.  Grant then resolves to move on Richmond, redoubt of the failing Confederacy.  Flashbacks of both Grant and Lee conferring with their aides occur – reminding one of the style of the Civil War masterpiece by documentary film-maker Ken Burns.

A chorale scene develops as mothers, sisters, wives, and sweethearts come forward with elegantly framed photos of the dead soldiers in a most emotional, heart-rending scene.  We hear military music of the Confederacy in the background, underlining the breathtaking drama of these images and music.  Soon the soldiers of the Union’s black Arkansas Brigade arrive with a rousing military anthem, much in the tradition of the Battle Hymn of the Republic.

In the siege of Richmond, four life-size dead horse carcasses (strung up from their hind feet) are lowered.  In this most striking scene (appearing twice in the opera), grafitti is scrawled on the back wall of the full stage reading “Sic Semper Tyrannis (Thus Always to Tyrants)”, the motto of the State of Virginia – the words that John Wilkes Booth shouted after assassinating Abraham Lincoln, adding “the South is Avenged”.

Lee implores his wife Mary Custis to leave the city of Richmond, but she declares she will never go.  The battle ensues with explosions, gunfire, even bombs bursting in air, as citizens flee with whatever they can carry.  A pathetic tiny tot – hand held by his older sister – is seen in hopeless desolation.  An elegant Lady of the Old South clutches the just-lowered Stars and Bars flag.  Glass’ Fall of Richmond is the equivalent of the Confederacy’s Goetterdaemmerung, and that assessment includes his music!!  This is dramatic, historic, emotion-gripping opera at its best.

Lincoln arrives and is celebrated by newly freed slaves, one of whom kneels at Lincoln’s feet, but the President will have none of that, telling her to kneel only to God.  A black newspaper reporter has been frantically recording the rapidly unfolding drama, suddenly finding in a pile of rubble (and sitting upon) the Speaker’s chair of the Confederate Congress.  Mary Custis protests being guarded by a black sentry.  The Union general replaces him with a white soldier.  The action-filled first act ends as Grant and Lee agree upon a meeting, Lee having at last comprehended that he is defeated.

[Below: Jeremy Galyon as President Abraham Lincoln; edited image, based on a John Lee photograph, courtesy of the San Francisco Opera.] 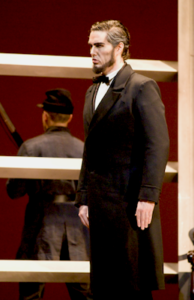 The second act is starkly different, filled with flash-forwards of events to come.  Arriving for the designated meeting – Lee appearing in his magnificent uniform, Grant in battle-worn gear – the two discuss the terms with Grant showing extraordinary civility and grace.  The music again achieves Wagnerian dimensions as Lee and Grant sign the treaty ending the Civil War.

Glass notes that the dignity and civility shown by Grant and Lee are not seen in today’s politicians anywhere.  We are reminded repeatedly that the issues some thought to be settled at Appomattox in fact continued for at least another hundred years, until the Civil Rights movement of the 1960s.  There are references to the March on Montgomery – an extremely moving chorus singing that it is not over yet.  Yet no sooner do Grant and Lee exit the home wherein the Treaty was signed, than pillagers and souvenir hunters from both sides of the war, in a significantly symbolic scene, plunder and steal everything in the house.

At the end a Ku Klux Klansman wheels himself forward in his wheelchair, exhorting a racist diatribe, showing in blinding light that he regards the values of the Confederacy as not dead.  He then walks away erect in a healthy stride, belying his feigned disability with penetrating force and meaning.

The end comes as the opera’s women, led by Mrs Ulysses S. Grant, sing in sorrow of the madness, loss and yet ongoing reality of mankind’s wars.  We see Lincoln’s flag-draped casket ceremoniously dirged across the stage (with his boots and saddle) as the dramatic pageant moves to a conclusion.

This is world class opera shown in unforgettable laser-light, laying bare issues that remain with us even today.  The second act is fervently political.  One sensed that not all of the San Francisco audience appreciated the political statement. But this is an American War and Peace if there is ever to be one, and in my judgement is a masterpiece of American opera, every bit as much as masterpiece as Ken Burns’ films on the Civil War.

At the end of the performance, my parting thought was, why hasn’t a composer taken on this epochal sweep of history before?

Imagine what Tchaikovsky could have done with it.  He came to America and conducted his works, including the 1812 Overture.  Or Dvorak, who lived here while composing the New World Symphony.  Or Aaron Copland, whose music so perfectly captures the sound of America.  Just think what he could have created! But none of this was to be. The impact of the Civil War was not to be be addressed as an operatic subject on an epic scale, until now.