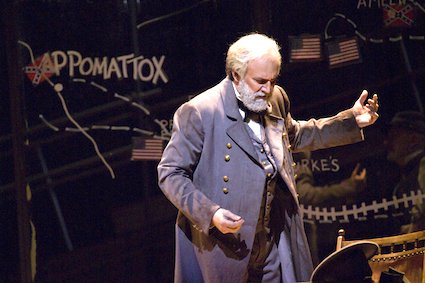 The following is a cumulative list of “snapshot” initial reactions to each of the operas that San Francisco has produced this year. As mentioned before, I do not grade on a curve, but give “A’s” or “A+’s” to performances I regard as, respectively, a world class performance, or both a world class performance and one of historic interest in the annals of the San Francisco Opera. For those who wonder if I only say nice things about this opera company, one may peruse my reviews of several 2005 and 2006 performances, critical of either the production or performance or both.

If General Director David Gockley intended to blow us away with one stunning performance after another, then he has succeeded admirably. Of the seven operas presented so far, all are impressive performances that meet the highest standards of opera production.

Appomattox (Glass) – Philip Glass’ idiosyncratic compositional style, that builds on repeating musical patterns, interspersed with effusive melody, provides the matrix for a profound musical AND theatrical experience of a kind that one misses in much of contemporary opera. Those of us who appreciate Wagner’s genius may recognize the parallels between “Appomattox” and the mature compositions of Wagner – the wall of sound created by a large orchestra and chorus in support of the principal singers, the imaginative use of stagecraft and lighting, and the intent that the words of the drama are always understood. Conductor Dennis Russell Davies led the extraordinary effort.

In this case the words that librettist Christopher Hampton and Glass have assembled are almost always based on the actual words or reported sentiments of the historical characters presented, but, again like Wagner, it is the composer himself clearly in command of every aspect of this production. There are other parallels with opera from the Romantic era, including the intermixture of chorus and principals engaged in exuberant melodies, such as the chorus of black soldiers from the Arkansas Brigade arriving in defeated Richmond, or in expressions of sorrow and profound loss, poignantly sung by the wives of the President (Heidi Melton as Mary Todd Lincoln) and Generals Grant (Rhoslyn Jones as Julia Dent Grant) and Lee (Elza van den Heever as Mary Custis Lee).

This is a message opera. Glass’ message is that three great men – President Lincoln (Jeremy Galyon) and Generals Grant (Andrew Shore) and Lee (Dwayne Croft) – had agreed on a strategy of reconciliation at the end of one of the most destructive experiences in all of human history, but that forces intent on revenge, unwilling to accept defeat, postponed that reconciliation for another hundred years. Those forces led to the assassination of Lincoln and the creation of the Ku Klux Klan as agents of a century of acts of murder and mayhem vividly chronicled by the opera.

[Below: Dwayne Croft as General Robert E. Lee; edited image, based on a Terrence McCarthy photograph, courtesy of the San Francisco Opera.] 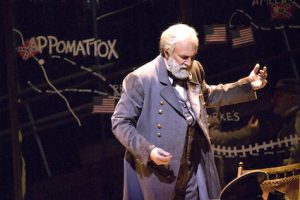 Noah Stewart, one the seven current Adler Fellows creating roles in this opera, gives a memorable portrait of T. Morris Chester, a black journalist who reported on both the Fall of Richmond and a massacre of black soldiers seven years later. Towards the end of the opera in a gripping monologue, white supremist Edgar Ray Killen (in an extraordinary portrayal by Philip Skinner), disabled and in jail for his part in the murders of civil rights leaders in th 1960s, shows himself unrepentent. But it is the revulsion one feels at the events Glass and Hampton have chosen to mark this dark period of history that suggests that Killen (who as of this date is still alive) is the tragic anachronism, and that this nation has for years been working out the reconciliation that had been so important to the president and the two generals. Wagner used opera to promote the unification of Germany, Verdi the unification of Italy. Glass, raised in Baltimore, sees the need to promote reconciliation of North and South, white and black, and, in his mission, has created a masterpiece.

Die Zauberflöte (Mozart) – What originally had been announced as the 1980 Maurice Sendak production of “The Magic Flute” – a milestone in Gockley’s career at Houston – had to be changed when it was discovered that flooding from 2005’s Hurricane Wilma (which hit Florida when the Sendak production was being warehoused by Miami’s Florida Grand Opera) had resulted in irreparable long-term damage to the existing sets and costumes.

Fortunately, Gockley was able to secure the Los Angeles Opera’s production, designed by British satirical cartoonist Gerald Scarfe and directed by Stanley M. Garner. It proved to be a magical experience, with dazzling costumes and sets from Scarfe’s apparently limitless imagination. Donald Runnicles was again at the helm as conductor. The crucial trio of Tamino, Pamina and Papageno were triumphantly performed respectively by Piotr Beczala, Dina Kuznetsova and and the debuting Christopher Maltman. Other contributors to a successful evening were Erika Miklosa (Queen of the Night), Elza van den Heever, Kendall Gladen and Katharine Tier as the Queen’s hilarious three ladies, Greg Fedderly (Monostatos) and Georg Zeppenfeld, a baritonal-sounding Sarastro (but with a basso’s low notes) in his American debut.

Tannhauser (Wagner) – Graham Vick and Ian Judge are both stage directors renowned for their productions of The Bard’s plays, and both have taken on the assignment to find new meanings in contemporary productions of Wagner’s “Tannhauser”, Vick for the first new production planned by new San Francisco Opera General Director David Gockley, Judge for last Winter’s Los Angeles Opera season. What each found is astonishing. Where Judge displayed great interest in the First Act’s Venusberg, presented so graphically that it not only shocked the socially conforming minnesingers in the Wartburg, but much of Los Angeles as well, Vick mined the second act’s song contest. In fact, the whole opera is transformed into a large unit set representing the Wartburg hall where music competitions were held. Vick found his handle on the mysterious story by transforming both pilgrims and minnesingers into a community of religious charismatics. In this presentation, Tannhauser is being pulled by two different worlds, each as passionate and centered on self-abandonment to communal love (spiritual in the Wartburg, physical in the Venusberg) as the other, but completely at odds with the other world. Petra Maria Schnitzer (Elizabeth) sounded as beautiful as she did in February in Los Angeles, but her husband Peter Seiffert was in much better voice in San Francisco than earlier, confirming his reputation as a great Tannhauser. James Rutherford (Wolfram), Petra Lang (Venus), Stefan Margita (Walther) and Gregory Reinhart (Biterolf) were vocally impressive. Donald Runnicles conducted superbly.

Samson et Dalila (Saint-Saens) – San Francisco Opera in the late 1970s was a crucible for the creativity of Nicolas Joel, then a youthful apprentice to Jean-Pierre Ponnelle. Kurt Herbert Adler invited Joel to create a new production of Saint-Saens exotic French grand opera, “Samson et Dalila” in 1980 for Placido Domingo, Shirley Verrett and Wolfgang Brendel. This production, with sets created by Douglas Schmidt, is one of the most stylish of the Adler era, and is as bright and colorful as it was 27 years earlier. Although the Joel-Schmidt production is often seen in other opera houses, it was designed for San Francisco War Memorial Opera House and its elegance shines there. The 2007 mounting, conducted by Patrick Summers, stars Clifton Forbis and Olga Borodina, both effective in the title roles. Incisive stage direction by Sandra Bernhard helps make the point that while the Israelite men are a frightening force to the Philistine men, Dalila and the Philistine women know how to get the better of the Israelite men.

Der Rosenkavalier (Richard Strauss) – Conductor Donald Runnicles led a performance that exceeded even the high standards of the San Francisco Opera, a company with a long history of presenting “Der Rosenkavalier” as intended. He opened many of the traditional performance cuts imposed on this opera. The rivals Octavian and Ochs were played by as convincing a pair of singing actors (Joyce Di Donato and Kristinn Sigmundsson) as have ever appeared here in those roles, Sigmundsson playing Ochs, not as a lout, but a nobleman with a considerable degree of class. The two objects of Octavian’s attentions were enchantingly sung by Miah Persson, the Sophie, and Soile Isokoski, the Marschallin, both of whom joined Di Donato in a memorable last act trio. Deep casting resulted in noteworthy performances by Jochen Schmeckenbecher (Faninal), Bruce McPherson (Italian Tenor), David Cangelosi (Valzacchi), Catherine Cook (Annina), Heidi Melton (Marianne) and Jeremy Galyon (doubling as the Notary and Police Commissioner).

Iphigenie en Tauride (Gluck) – The opera is a museum piece, but the best museums house priceless treasures. Susan Graham is peerless in late 18th century roles such as Iphigenie. Bo Skovhus as her brother Oreste and Paul Groves as his soul-mate Pylade prove that Gluck’s later operas can delve into psychological realms and, with beautiful music sung with dramatic flair, can hold audience interest. Producer Robert Carsen, absent from San Francisco for almost two decades since his wildly successful conceptualization of Boito’s “Mefistofele”, has proposed some tentative solutions to the riddles of mounting this opera for contemporary audiences. The chorus is moved to the orchestra pit, where the extraordinary talent of Conductor Patrick Summers holds sway over chorus and orchestra. The principals on stage are joined by a troupe of over two dozen dancers. An almost constant presence, the dancers move the action along, and help bring these characters from classical Greek drama to life.

Don Giovanni (Mozart) – Mariusz Kwiecien’s indelible image as a demonic Don Giovanni, prancing about the new production by David McVicar, earns his place in the San Francisco Opera pantheon of immortal performances in this role. As an opening night surprise, Adler Fellow Elza van den Heever made a triumphant debut (her first appearance on any major opera company’s stage) as Donna Anna and won a sustained audience ovation. Conductor Donald Runnicles and the rest of the cast (including Oren Gradus, Twyla Robinson, Claudia Mahnke, Charles Castronovo and Kristinn Sigmundsson) were invariably excellent, with newcomer Luca Pisaroni making a strong debut impression as Masetto.