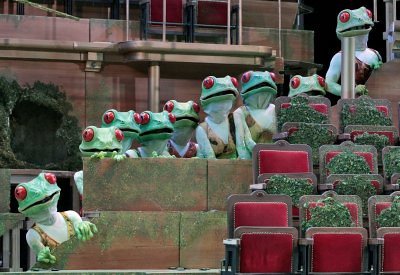 Returning to Santa Fe Opera’s summer season is always a maximum delight. Each summer we anticipate fabulous productions set in the most sublime outdoor setting conceivable. Between operas we enjoy dining on Santa Fe’s unique cuisine, presented in spectacular and abundant regionally-perfect restaurants, and dallying in some of the 250+ art galleries!

[Below: Dancers (in costume) from the Laurent Pelly production of Rameau’s “Platee”; edited image, based on a Ken Howard photograph, courtesy of rhe Santa Fe Opera.] 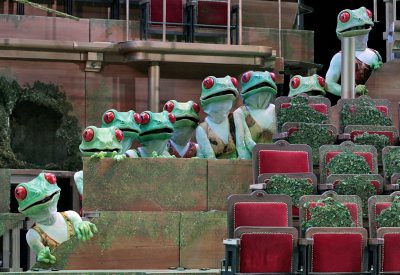 Driving up from the airport in Albuquerque (since we ordinary civilians cannot fly into Santa Fe), we saw an immense, brilliantly clear rainbow shimmering directly above New Mexico’s capital city, which we thought portended a sign that something wonderful might be found at the end of that rainbow. Maybe a pot of gold? 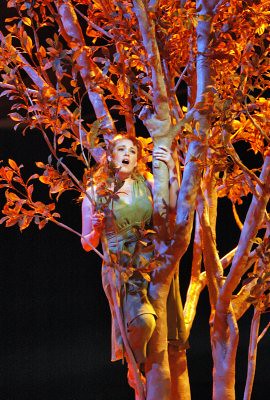 No, something even better – Santa Fe Opera’s 2007 season. In almost every previous season, Santa Fe Opera produced a work by Richard Strauss and one by Mozart, and a repertoire including something new, something old, and often something wild. Now under the direction of General Director Richard Gaddes, who succeeded the esteemed and revered founder, John Crosby, Santa Fe Opera begins its second half-century.

Since its founding, the Santa Fe Opera has presented 138 operas, including 10 world premieres and 43 American premieres. Mozart’s “Marriage of Figaro” has been the most performed work (and will be seen again in 2008), followed closely by Mozart’s “Cosi fan tutte” and “Magic Flute”.

Crosby adored Richard Strauss. Name any of the lesser known Strauss works and Santa Fe Opera likely has performed it, from “A” for “Arabella” through “S” for “Die schweigsame Frau”, including the American premiere stage performance in 1964 of this year’s “Daphne” (which I saw previously in 1996 and loved it then also) as well as the American premieres of “Capriccio”, “The Egyptian Helen”, “Friedenstag”, “Intermezzo” “Die Liebe der Danae” as well as performances of the more familiar “Salome” in ten seasons. But Mozart operas top the list with 49 mountings of Mozart operas so far.

[Below: Dale Travis as Don Alfonso in “Cosi Fan Tutte”; edited image, based on a Ken Howard photograph, courtesy of Santa Fe Opera.] 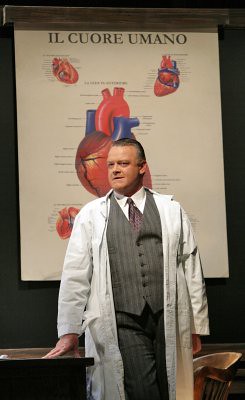 For 2007, there was a very traditional reading of Puccini’s divine “La Boheme”. This season’s “Cosi” is the 11th presentation of that wonderful piece. The production likely appealed to the many doctors in the audience. The protagonist (Don Alfonso, superbly sung by Dale Travis) is a cardiologist complete with stethoscope, white coat and a large chart of the human heart over his desk, who engineers the switching of the girlfriends to test the genuineness of a woman giving her heart to her lover. After all, isn’t “Cosi” all about devious women allegedly giving their hearts for love?

The opera opens with a lineup of soldiers in their skivvies being examined by a vaudeville-nurse sticking a huge tongue-depresser in their mouths. One of the patients has a neon-green tongue which he, in turn, sticks out. Then the nurse does the hammer-tap knee-jerk test with exactly the results one would expect in a screaming comedy like this one.

[Below left: Susanne Mentzer as Despina in “Cosi fan Tutte”; edited image, based on a Ken Howard photograph, courtesy of Santa Fe Opera.] 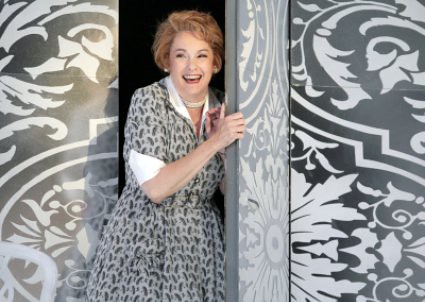 Stealing the show was Susanne Mentzer as Despina (who was also the Queen in the Met’s “The First Emperor”, referenced below) who is supposed to be the maid for the cigarette-puffing ladies, but is drawn into the clever plot by Don Alfonso, ultimately acting as a quack doctor reviving the supposedly fatally-poisoned lads with a magical magnet, then later as the quack lawyer/notary attempting to get signatures on the marriage contracts by the less than genuine former lovers. In between all of this Mozart’s glorious music is brilliantly played by Santa Fe Opera’s orchestra, comprised of gifted musicians from all over the world, wonderfully conducted by William Lacey.

The show-stopper was the wonderful scene in which Don Alfonso tries to trick the girls into leaving their soldier-lovers, supposedly inducted into a military campaign, into a dalliance with dashing “Albanian” visitors (their boy friends in disguise, gussied up in berzerk Turkish gladrags.) The Albanians try to tempt the girls with huge red, heart-shaped boxes of candy, but the girls seize these boxes and break them over the heads of these conniving opportunists! The romp ends with Don Alfonso gloatingly counting his bet money won by “virtue” of the not-so-virtuous ladies. In the end all is forgiveness and redemption, as love – and Mozart – triumphs!

The Strauss “Daphne” is all about Apollo, Cupid’s misguided arrows, Dionysius, Zeus, and the young shepherd girl Daphne in a one-act drama with luscious, sweeping, extravagant late 19th century-sounding music, thought by contemporary composers to be incredibly old-fashioned for 1938, with an abundance of beautiful melody in the tradition of “Der Rosenkavalier”. I had seen “Daphne” during Santa Fe’s 1996 season, and had seen it also in Dresden’s opulent Semperoper, where the opera was premiered during the Nazi era.

Strauss had been the General Director of the Dresden Opera House. Many years earlier an even more eminent Richard, surnamed Wagner, had held the directorship! That wondrous opera house was destroyed in the firebombing of February 1945, but was magnificently restored (by Communist East Germany!) and now presents a full repertory of world class opera year-round. If traveling in Central Europe, do not miss this jewel-like baroque city surrounded by lush scenery, nearby Meissen (for the porcelain collectors among you), stupendous castles, like the fairytale island castle Moritzburg and the dazzling “oriental” palace Pillnitz on the Elbe River, with lots more to see, excellent lodgings, and superb dining.

[Below: Mercure (Norman Reinhard), left, and Citheron (David Pittsinger) with Platee (Jean-Paul Fouchecourt) between them; edited image, based on a Ken Howard photograph, courtesy of Santa Fe Opera.] 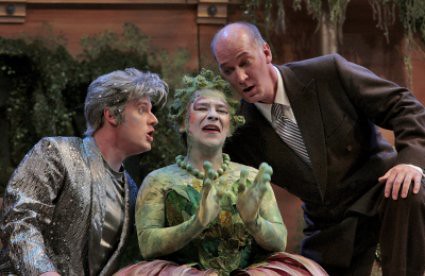 The Santa Fe season came to a conclusion with the Laurent Pelly production of Jean-Philippe Rameau’s “Platee”, first presented to the bejewelled and extravagantly dressed aristocrats of Versailles in 1745. Rameau followed in the traditions of his predecessor as court composer, Jean-Baptiste Lully, but musically was much more advanced. If one listened only to a CD performance of the opera, it would come off as a classically baroque opera, strongly suggesting Georg Friederich Handel’s operas and oratorios. That might also have been your impression if you had attended the Santa Fe opera performance blindfolded.

But the screaming laughter of the audience might have suggested something else was happening other than prissy performers in powdered wigs bowing to each other and gyrating around the stage. Santa Fe Opera pulled out all the stops for this one: flat-out slapstick vaudeville comedy in extremis. The stage presentation seemingly had nothing to do with the music in this production fresh from Paris. Many of the characters are comedic frogs, with many incredibly fast, spectacular ballet sequences. Never in my 21 years of attending Santa Fe Opera performances have I seen anything like this.

[Below: the Dancers of the “Platee” ballet; edited image, based on a Ken Howard photograph, courtesy of Santa Fe Opera.]

Santa Fe Opera obviously embraces comedy, and Pelly knows what will get the laughs. In the summer 2006 season, his production of Massenet’s “Cinderella” was so funny that afterwards my ribs literally ached from so much laughter. Three season’s earlier, Pelly’s production of Offenbach’s “La Belle Helene”, done at the seashore with everyone in comtemporary beach garb under beach umbrellas, with inflatable water toys and beach volleyball games, was a side-splitting comedy. (See also William’s review on this website, done last month, of Pelly’s take on Donizetti’s “L’Elisir d’Amore” in Paris.) But this season’s “Platee” was the funniest stage production of anything I have seen anywhere.

This season also included the American premiere of an opera by Chinese-born composer Tan Dun entitled “Tea – A Mirror of Soul” commissioned by Tokyo’s Suntory Hall as a fully staged concert piece and first shown there in 2002. I did not see “Tea” but did get to hear it.

Tan Dun also wrote “The First Emperor” which the Metropolitan Opera presented this season with Placido Domingo, which many of you heard on the Met’s Saturday broadcast or saw in the Met’s nationwide movie-theater presentations. (These movie theatre transmissions are fabulous, and should not be missed next season. See MetOpera.org for information.) I saw the film twice!!