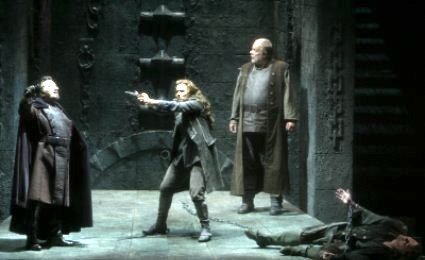 The following review is from guest reviewer, Thomas Rubbert:

Last night we came, we saw, and we were conquered by L. A.’s spectacular new “Fidelio” which garnered the longest line of ticket-seekers I have seen at the Music Center. The L. A. audience roared in unison at the triumphant end as Grant Gerson’s L. A. Opera Chorus overwhelmed the house to the delight of all.

From Shipwreck to Heroic Triumph: Los Angeles Does “Fidelio”

Opening the Fall season of Los Angeles Opera was Beethoven’s sole operatic venture, Fidelio, which he reforged again and again after its first performance (November, 1805). Its first premiere was such a catastrophe that he wrote it was simply a Shipwreck!! The original of this notation I had seen at the Beethoven Museum in lovely Bonn, Germany, his birthplace, prominently displayed and highlighted for the amusement of all. Adjacent to this memorial, was the very large bronze bust of him as a brooding, stormy, chiselled-feature, angry revolutionary, which we usually see replicated in miniature in opera shops.

The new production from Valencia, Spain (seen September 26 and 29, 2007) designed by Sergio Metali and directed by Pier’ Alli, featured Star Wars inspired moving projections in Act II. These projections were extremely effective in emphasizing the drama of the scene and the music.

[ Below: Anja Kampe is Leonore/Fidelio and Klaus Florian Vogt is Florestan; edited image, based on a copyrighted Robert Millard photograph, courtesy of the Los Angeles Opera.] 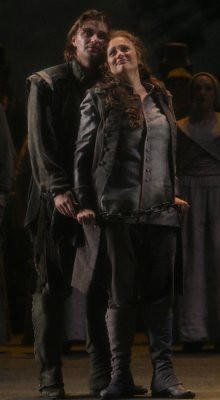 But Act I and II seem to have little in common. Act I is very much the Beethoven of the Third (Eroica), Fourth and especially Seventh symphonies, with dark, very Germanic – indeed brooding – music, strongly suggesting Mozart’s darker numbers. In the middle of Act II, the opera gathers momentum with the Leonore Overture Number 3 (sensationally conducted to a standing ovation by L. A. Opera’s new Music Director, John Conlon – the best I have every heard of this ripping piece) and ends in the brilliance of victory over unjust oppression with Beethoven at his musical-genius-best, reminiscent of the glorious conclusion of his colossal 9th Symphony’s Ode to Joy.

Interestingly, when Fidelio (originally named Leonore after its heroine) opened in Vienna, Napoleon’s Grande Armee had just occupied Austria under the banner of Egalite, Liberte et Fraternite!!! We hear exultations of freiheit again and again as Fidelio ends, as in the great Ninth Symphony! As we all know, Beethoven had gloried in the ideals of the French 1789 Revolution, but came to loathe Napoleion when he concluded that the concepts of Egalite, etc., had been forgotten.

This production begins as a German singspiel comedy, in the dungeons of Rocco’s prison. Here Leonore (our heroine) works through her clever plans to free her husband, Florestan, who is wrongly imprisoned. The jailer’s daughter Marzelline irons clothes on a huge torture rack in a room of torture devices almost Disney-comic in style. When annoyed, she brandishes the hot iron at passersbys.

But ultimately we are given to understand that this is no Mozart (or Disney) comedy. Dreadful looking, obviously suffering, tattered prisoners emerge at last into the light from behind enormous prison gates and launch into a very moving Prisoner’s Chorus, bringing Act I to a thrilling close. The chorus is under the leadership of L. A. Opera’s new chorus master, Grant Gershon, who leads the excellent Los Angeles Master Chorale. (The chorale’s separate scene includes the operatic Brahms German Requiem this year.)

[Below: Fidelio (Anja Kampe, with pistol) threatens Don Pizarro (Elke Wilm Schulte) as Rocco (Matti Salminen) looks on and Florestan (Klaus Florian Vogt) is in chains, at right; edited image, based on a copyrighted Robert Millard photograph, courtesy of the Los Angeles Opera.] 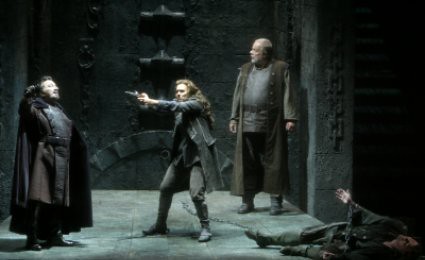 The cast for the Los Angeles Fidelio was uniformly strong, led by the Leonore of Anja Kampe, singing most brilliantly, opposite her Florestan, magnificently sung by Germany’s Florian Vogt, with Matti Salminen’s terrific basso as the jailer Rocco. L. A.’s frequent guest Greg Fedderly did an excellent job as the jailer’s daughter’s would-be lover. Another German, Eike Wilm Schulte, rounded out the uniformly excellent cast as Governor Pizarro for a truly stunning production of this operatic masterpiece.

In his last days, deaf and gravely ill, Beethoven observed about Fidelio to his biographer Anton Schindler, “Of all my children, this is the one that cost me the worst birth-pangs and brought me the most sorrow, and for that reason it is the one most dear to me.” From Shipwreck to Triumph was not a smooth passage.

For a review of a previous production of “Fidelio”, see: SF: Pamela Rosenberg Finale at final “Fidelio” – November 27, 2005

For a review of Matti Salminen’s Gurnemanz, see: Domingo is the Redeemer of L.A.’s spellbound “Parsifal”: December 8, 2005