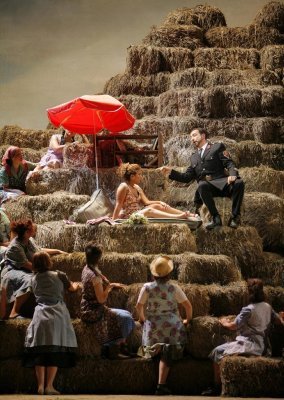 Paris is the first stop in my 2007-08 pilgrimage “In Quest of Donizetti” that I have planned to honor the 50th anniversary of Leyla Gencer’s first Donizetti role, Lucia di Lammermoor – her role debut taking place at the San Francisco Opera. In Paris, I experienced the first revival of Laurent Pelly’s imaginative staging of Donizetti’s “L’Elisir d’Amore”.

There were three principal cast members returning from Paris’ 2006 production premiere – Desiree Rancatore (Adina), Ambrogio Maestri (Dulcamara) and Laurent Naouri (Belcore). The 2006 Nemorino had been Paul Groves. That tenor currently is in London rehearsing his reprise of Pylade in Robert Carsen’s production of Gluck’s “Iphigenie en Tauride” (whose San Francisco performance in that role was reviewed on this website this past June.) Dmitry Korchak replaced Groves in 2007’s “L’Elisir”.

[Below: the front curtain for Laurent Pelly’s production; edited image, based on production photograph for the Opéra National de Paris.] 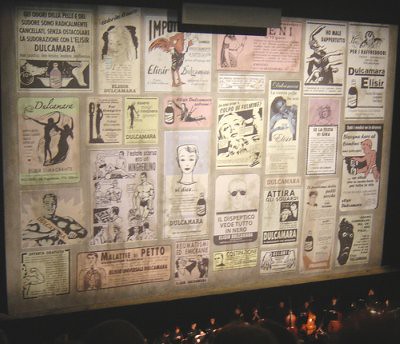 At the raising of the curtain, we see the first of Pelly’s three scene settings. The first scene contains all of the action that happens before the entrance of Doctor Dulcamara, setting up the triangle between the unsophisticated Nemorino, the object of his affections, Adina, and his rival Belcore.

The scene’s dominant feature is a large stack of bales of hay (presumably some material that would look like hay bales, but would permit the principals and chorus to engage in the opera’s action on this super-haystack without anyone unintentionally slipping and sliding on it). In fact, the hay bales are stacked in ways that permit the performers to climb, hop or run up and down them, as one might on a flight of stairs with very tall steps.

[Below: Act I Scene I of the Laurent Pelly production of “L’Elixir d’Amour”; edited image, based on a production photograph for the Opéra National de Paris.] 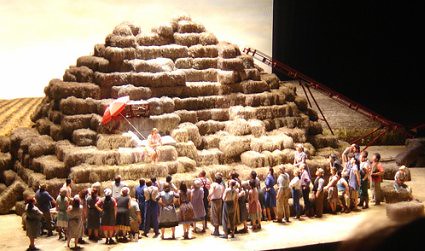 Midway up the haystack, Rancatore’s Adina is in a sun-dress, reading. She has set up a private space, furnished with a rose-colored beach umbrella and a makeshift bookcase for her paperbacks, that include the Tristan and Isotta story she will read to her rustic friends and neighbors. The chorus members are wearing the kinds of fashions one might expect of rural folks in any Western country a decade after World War II – overalls, khakis, denims, cloth dresses with aprons.

We soon meet the youthful Nemorino dressed in a horizontally striped green shirt, Korchak playing him as a goofy adolescent. Korchak made an excellent impression singing Quanto e bella in a classic leggiero voice that projected well in the Bastille opera house. Adina signals her lack of enthusiasm for his courtship, but raises the possibility that love elixirs, such as Tristan’s and Isotta’s, exist.

Over the top of the hay bale appears Naouri’s Sergeant Belcore, in dress blues, leader of a squad of two quite unsoldierly-looking men. He is an aggressive and physical suitor, hopping from bale to bale in pursuit of Adina, causing her to point the sharp end of her beach umbrella at him to slow him down.

[Below: Sergeant Belcore (Laurent Naouri, right center) sets out to impress Adina (Desiree Rancatore, below umbrella; edited image, based on a production photograph for the Opéra National de Paris.] 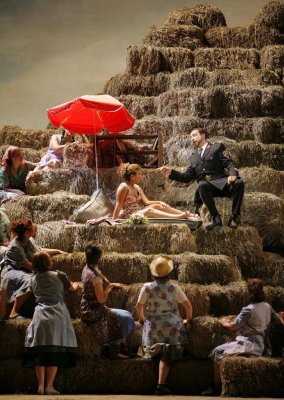 He is over-the-top, outrageously hammy, but possessed with the beautiful bel canto baritone voice that is requisite to any successful Belcore. Nemorino is obviously rattled by the unexpected competition, and he and Adina end the scene arguing until Adina takes off on her motorized bicycle.

[Below: Nemorino (Dmitry Korchak) and Adina (Desiree Rancatore) play coy with one another; edited image, based on a production photograph for the Opéra National de Paris.] 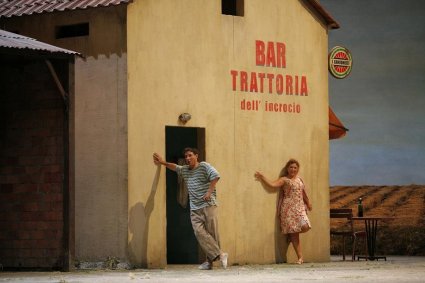 In the near distance one sees telephone lines, while electric power poles are visible farther away. Most of the villagers are on foot, although some ride bikes and motor-driven bicycles.

[Below: Laurent Pelly’s second scene for “L’Elixir d’Amour”; edited image, based on a production photograph for the Opéra National de Paris.] 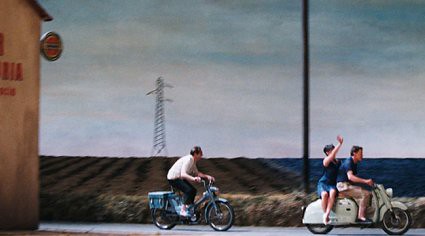 No villagers are around when a large panelled truck emblazoned with the logo Dulcamara Elisir Universale arrives. Dulcamara has two seasoned assistants, the truck’s driver and a jack-of-all-trades tasked to set up the roadshow. The panel truck opens to display a doctor’s examination room and various medical paraphernalia, with another section of the truck housing the Doctor’s private bedroom and television set.

Maestri’s Dulcamara, in fact, sings the first verse of his famous patter song without an audience, although a Jack Russell terrier runs across the stage at one point in his delivery. Eventually, curiosity, then guillibility, gets the best of the neighborhood, and before long all of the “rustici” are waving their paper money to assure they will get some of Dulcamara’s patent medicine. 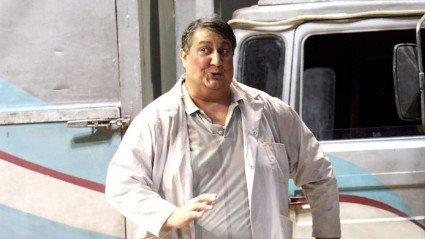 Maestri displayed mastery of one of the greatest and most sympathetic of bel canto buffo roles.

By this time, enthusiasm for the Doctor’s magical pharmaceutical has reached fever pitch, aided by flashing neon lights and rows of small lightbulbs in synchornized patterns. With his assistants passing out plastic spray bottles of the medicine and Dulcamara collecting the paper money, Dulcamara goes to the front of the stage while the chorus ends the number behind him rhythmically spraying their medicine into the air.

[Below: Doctor Dulcamara (Ambrogio Maestri, on truck  in white coat) hawks his patent medicine; edited image, based on a production photograph for the Opéra National de Paris.] 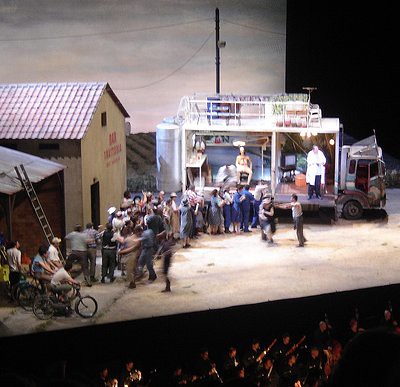 When Nemorino approaches Dulcamara to inquire whether he has any of Queen Isotta’s love potion for sale, and pulls a florin from out of his shoe, Dulcamara provides him with a half-consumed bottle of Bordeaux. At once a believer, Nemorino sits at a plastic chair and table in front of the trattoria, and, knowing the love potion will take effect the next day, feigns indifference to a now unsettled Adina, who is not used to Nemorino ignoring her. But she will not be bested, and promises her hand that evening to Belcore.

This leads to one of the greatest ensembles in all opera, Adina, Credemi, in which Korchak’s Nemorino is in despair, while Naouri’s Belcore laughs mockingly.

After the single intermission, Act II has two stacks of hay, one covered by tires, with a wooden stage between them for the Belcore-Adina wedding to take place.

[The Laurent Pelly second act sets; edited image, based on a production photograph for the Opéra National de Paris.] 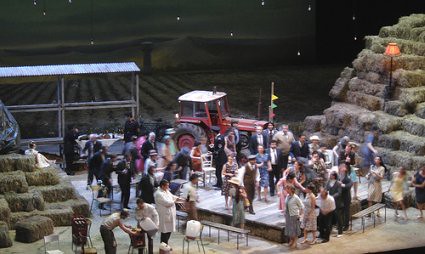 What none of the principals knows, but Giannetta (played by Jeannette Fischer) has learned through the gossip mill, is that Nemorino’s sick uncle has died and left him a fortune. Fischer and the women in her chorus have transformed themselves into predatory fortune-hunters, Giannetta even rubbing herself up against Nemorino, who assumes this is what happens to a man who has drunk a magic elixir.

This leads to the great quartet between Nemorino, Giannina, Adina and Dulcamara, joined by the women, that, in Pelly’s staging is so hilarious, that one cannot even remember that the quartet used to be a “traditional cut” that performances of this opera invariably sustained.

[Below: Dmitry Korchak as Nemorino; resized image, based on a Catherine Ashmore photograph for the Royal Opera House, Covent Garden.] 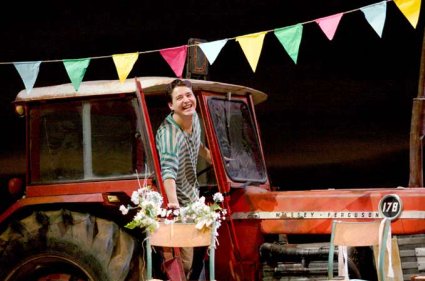 Korchak’s delivery of Donizetti’s most famous tenor aria, Una furtiva lagrima, takes place on the stack of haybales but with dozens of yellow electric lights descending over his head against a blue sky background. In the second verse of the aria, he sings an alternative version. He was followed by Rancatore’s stunning Prendi; per me sei libero, an extraordinary display of coloratura technique and control.

“L’Elisir d’Amore” is a work I have seen in six previous opera seasons, all at San Francisco Opera, with such luminaries as Alfredo Kraus, Luciano Pavarotti, Jose Carreras, Luis Lima, Jerry Hadley and Tito Beltran as Nemorino; Reri Grist and Ruth Ann Swenson as Adina; Sesto Bruscantini, Paolo Montarsolo, John Del Carlo and Simone Alaimo as Dulcamara; and Ingvar Wixell (his American debut), Dale Duesing, Gino Quilico and Rodney Gilfrey as Belcore. In fact, even the comprimaria role of Giannetta boasted such stars-to-be as Swenson and Laura Claycomb.

When my plans for the Donizetti pilgrimage were being set, I did not expect, of course, that the opera world would be mourning the deaths of two tenors, Luciano Pavarotti of cancer and Jerry Hadley by his own hand. I had seen each of these men perform both of Donizetti’s two most famous tenor roles, Nemorino and Edgardo in “Lucia di Lammermoor”.

However, it is not conceivable to me that anyone would not be uplifted by the joy that Laurent Pelly brings to this work. I have not yet heard what the plans are for it beyond its Paris run, and its presentation later in the Fall at Covent Garden in London, the opera company that is co-producing this work. I assume it will show up in the United States before too many years have passed.

One strange note: I attended a Sunday matinee of the Donizetti comedy. Unlike the Sunday matinees in San Francisco, which routinely sell out, whole sections of choice seats in the center orchestra obviously were unsold (or un-“resold”, depending on who was on the hook for them).

Although in the Paris Bastille opera house, most of the orchestra seats are priced the same, the majority of the audience were seated towards the sides rather than in the center. Five minutes before curtain time, the ushers went up and down the aisles inviting those in attendance to move to more favorable seats. My wife and I improved out seats by moving to first row orchestra just a few seats to the right of conductor Evelino Pido.

Opéra National de Paris ticket prices (even accounting for the disadvantageous exchange rates of the dollar versus the Euro) are currently substantially less than comparable seats at major U. S. opera companies (or Covent Garden in London). What miscalculation could have caused the premium seats for a world-class production of a popular opera to be unsold?

The first stop in my Donizetti Quest yielded a world-class performance of an enduring opera, 175 years old this year. I saw my first live Pelly production, which, though time-shifting the opera almost to contemporary times, stayed true to the story. Additionally, I came to know four exciting Donizetti singers – Rancatore, Korshak, Maestri and Naouri – none of whom I had seen before in any Donizetti roles. “L’Elisir”, I can report, is in good hands in Paris.