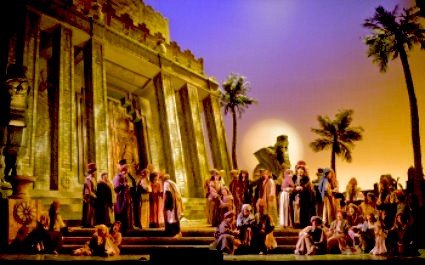 Those anticipating my review of Saint-Saens’ “Samson et Dalila” at the San Francisco Opera know that I have already highlighted the production in a earlier web-page as a best bet for seeing a world class performance. As I approached this evening, I wondered what I was was going to say in my review of this performance.

After all, I had recently reviewed a performance by Clifton Forbis, the Samson, in that very role and in this production in San Diego earlier this year. I had also seen the Dalila, Olga Borodina, in this production in 2001 in San Francisco, and had reported on her rousing Isabella – Rossini’s Italian Girl in Algiers – at Washington National Opera in 2006.

I imagined I would be like an ice-skating judge. These eminences score performances of routines they have seen many times. They are prepared to award near-perfect scores to their favorites, unless some disaster like the omission of a required performance element or a bad fall requires the mandatory deduction of points.

As it happened, the only bad fall was one suffered by Conductor Patrick Summers, and that when he failed to negotiate a curb when walking in Santa Fe, during the Summer opera festival in that city, resulting in an orthopaedic injury.

His fall, however, resulted in no point deductions as both his conducting and the opera performance deserved a solid A. But he was obviously uncomfortable. Prior to the first act, he used a crutch to walk to his podium and, uncharacteristically, conducted the opera while sitting.

Before the second act, a group of orchestra staff assistants and technicians worked on the chair from which he conducted, and, for the last two acts, instead of the traditional walk through the orchestra to the podium, he sat in a chair in the pit and walked, assistants at his side, the much shorter distance. 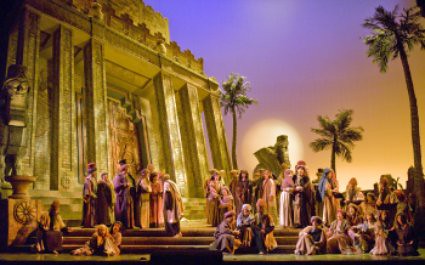 I am posting this review in Paris, rather than San Francisco, since I flew here a few hours after Samson destroyed the Temple of Dagon in the brilliant production Nicolas Joel created for the San Francisco Opera in 1980. I am here to review the Laurent Pelly production of the Donizetti comedy, The Elixir of Love, at Opera National de Paris.

Joel, of course, has been chosen to become the Director of the Paris Opera in 2009, replacing Gerard Mortier, who has fallen victim to the French age-based mandatory retirement laws. Joel, whose 15 year tenure at the Toulouse Opera was associated with productions considered conservative by contemporary European standards, has expressed deep skepticism for such Euro-concepts as time-shifting operas to different eras than specified by composers and librettists.

[Below: Samson (Clifton Forbis) in Act I; edited image, based on a Terrence McCarthy photograph, courtesy of the San Francisco Opera.] 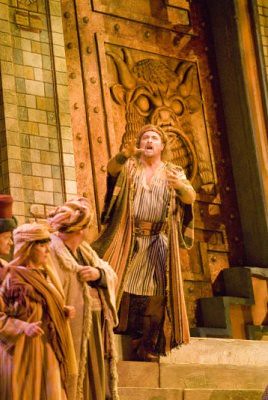 His 1980 San Francisco production of the most famous Saint-Saens opera elicited a quote ascribed to him in a 1990 interview in which he is reported to have said that, because Saint-Saens music is kitsch, it needed a kitschy production to display it.

My own take is that such a quote from the creator of this very successful production was a tongue-in-cheek statement whose irony sailed over the head of the interviewer. Even if meant seriously, it should be considered no more than a gentle rebuke of a creative person in his 30s about work he did in his 20s, that he regards as not representative of his current style.

Kitsch is a term, derived from a ponderous strain of Germanic artistic criticism, whose lack of relevance to the elegant and ingenious Saint-Saens composition would be evident to a person who studied the work with an open mind. But the association of the term with Joel’s conceptualization has slowly spread like a virus – albeit, not a particularly lethal one since the opera in this production almost invariably sells well – emboldening some of the old media critics in cities it has been shown to use the k-word and the principal critic of the only remaining San Francisco daily newspaper even to invoke the spirit of epic movie producer Cecil B. DeMille.

If one looks again at the quote ascribed to Joel and substituted the word exoticism for the word kitsch, then the quote not only becomes palatable, it becomes instructive, as well.

Saint-Saens intended to show us a world of sensual delight, and to contrast it with the puritanical world of the Old Hebrew and of Samson himself before he first strayed into the arms of Dalila. The contrast between these worlds is a subject that several operas developed for Paris would take on – a new production in San Francisco of an opera whose first act takes place in the lair of the goddess Venus is scheduled to be reviewed on this website next month.

Since Saint-Saens has created unique sounds for both the sensual and puritanical worlds, sets such as were created by Douglas W. Schmidt to realize the Joel concept immerse us, the spectators, in this exotic and sensual land. If anything, some modifications of the original stage direction by Sandra Bernhard, made the tensions between the Old Hebrew’s world and Dalila’s even more evident.

The first act ballet is not only an opportunity to show off the beautiful young women that Dalila has as her accomplices, but how those women deliberately entice three young Israelite men – played by male members of the opera ballet – to don garland head dresses and to dance with the women in their salute to spring. The very presence of these women causes the Old Hebrew, nicely sung and acted by Oren Gradus, a momentary lapse of dignity – he apparently knows of their powers from experience and, after a glance at the alluring women, throws up his hands defensively.

More telling, when the rest of the Israelites leave the stage and we are focusing on the schemes for the further seduction of Samson by Dalila, the young Israelites remain on stage, obviously wishing to continue their dances with the women in a more private setting.

If the Philistine women have figured out how to get into the heads of the Israelite men, it is the latter who cause disquiet in their Philistine counterparts. Nervous and superstitious, the men from the high priest down are rattled by the Israelite Judges’ constant prophecies that the Israelite God will destroy them, and, as well, by the havoc wreaked by Israelite insurgents.

Not only the opera’s music and libretto, but the Joel production, including a memorable eclipse of the sun in the first act, exploit the Philistine angst. Bernhard portrays the bewildered Philistines through crisp and sudden entrances and exits, including a fateful quick departure of troops that leaves an isolated Abimelech surrounded by hostiles, within moments to be strangled by Samson.

[Below: Samson (Clifton Forbis), kneeling, with Abimelech (Eric Jordan) above; edited image, based on a Terrence McCarthy photograph, courtesy of the San Francisco Opera.] 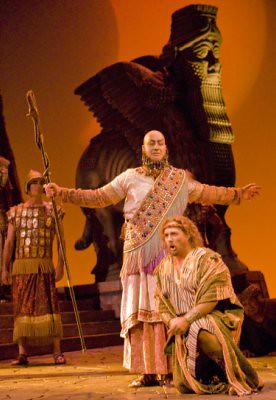 In fact, it is not until Dalila conquers Samson and he is blinded and imprisoned do the Philistine men start to relax. One cannot imagine the bacchanale occuring in the first act, when the Philistines know Samson still has the capacity to do them great harm. 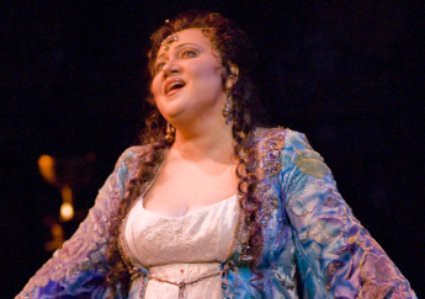 One Bernhard innovation, however, I cannot endorse. Apparently wondering who the child is who leads Samson to the weight-bearing temple pillars, she tries to create a new backstory for a plot element that seems to me to have disturbed almost no one.

Choosing a much younger boy than one usually expects, she introduces him as Samson’s companion in Act III Scene I, in which the blinded Samson pushes a giant mill-wheel. The boy joins Samson at the Bacchanal, and there becomes the plaything for reveling women, who push him from one woman to another, while Samson tries to retrieve him. I thought the motivation for introducing him to be murky. For the record, my wife thought the stage business to be cute. 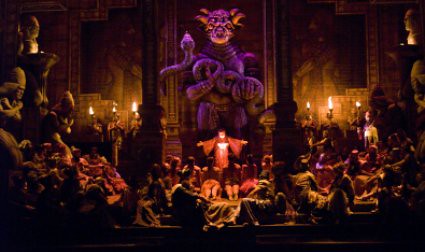 Having found the conducting, production, and almost all of the stage direction to be praiseworthy, only the singing must yet be discussed. Borodina, as expected, demonstrated the appropriateness of this role to a great mezzo-soprano voice that is equally comfortable with notes below Middle C as with the B above it. Her acting, was, as expected, mesmerizing.

Paranthetically, it was most revealing to see both Borodina and Denyce Graves, two near contemporaries who are the world’s reigning Dalilas, both performing in the same production within a seven month period. I found Graves to portray Dalila as the more lethal seductress, and hope for another revival of this production in San Francisco before too many years have passed, that would provide an opportunity for Graves to sing the role at the War Memorial Opera House. But for those who have seen either diva in this role, you should count your blessings.

Forbis unquestionably is high on the short list of artists performing the challenging role of Samson. Both times I have seen him, he has seemed less at ease declaiming the will of God in the opening pages of the score, than in the rest of the work in which he becomes first the treasonous sinner, then the penitent. Any doubt that his voice would carry well in the War Memorial was soon dispelled. He was an especially engaging Samson during his second act seduction by Dalila and in communicating despair and then vengeance in the two scenes of the final act.

I liked Finnish baritone Juha Uusitalo in the role of the High Priest of Dagon, regarding this role as best-suited to the sound of his voice in this large house of the three he has performed in San Francisco. My preference had been for a deeper, darker baritone voice for the two German roles he previously sang here – the title role in Wagner’s The Flying Dutchman and Don Pizarro in Beethoven’s Fidelio. On the next revival of this production, however, yet another re-design of the High Priest’s costume seems warranted.

The relatively small cast includes the important character role of the overseer Abimelech, providing a vehicle for an impressive San Francisco Opera debut by Eric Jordan. Adler Fellow Noah Stewart was the Philistine Messenger, a brief but important role that he did well. Two roles often assigned to larger voices from the opera chorus – the First and Second Philistines – were sung creditably by choristers Richard Walker and Jere Torkelsen. The trio of Philistines and Messenger provide information delivered in a rhythmic pace that is one of the little gems of this fascinating score.

An enduring work of art will continue to reveal new dimensions as one’s knowledge and experience with it grow. Saint-Saens’ great opera has been under-valued by many opera-goers, who would come to cherish it if their minds and hearts would open to it.

For another opera production whose title character is immersed in an exotic world of sensuality, see: Powerful, Edgy “Tannhauser” at Los Angeles Opera – February 28, 2007