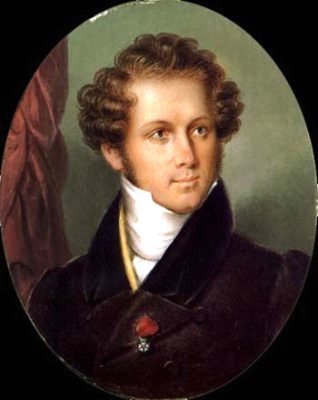 During the first 30 years of history of the San Francisco Opera, Italian-born Gaetano Merola was at the opera’s helm.

[Below: Italian composer Vincenzo Bellini; resized image, based on a portrait from life.] 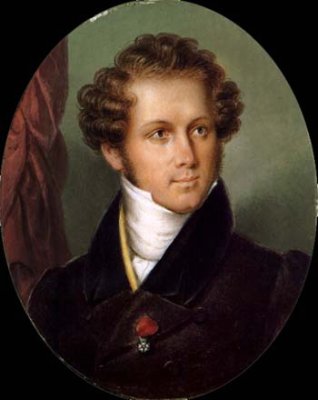 That said, what would be your guess as to how many performances of operas by one of Italy’s greatest composers – Vincenzo Bellini – were heard during the Merola years? Imagine Doctor Dulcamara, the persuasive pitchman from Donizetti’s “L’Elisir d’Amore” seeking your guess of the number of Bellini performances! A hundred? No, too many! Thirty? Too high still. Five? Still too many!

The answer: the number of San Francisco Opera performances of Bellini operas from the opera company’s founding in 1922 through the 1959 season is one (1). That is not one production performed multiple times during a single season, but just one single performance of “Norma” in 1937.

Bellini’s two famous contemporaries – Rossini and Donizetti – both beat that number handily. Yet, when the total body of works of each of them is considered, the San Francisco fare was most limited. Rossini had only his one single megahit, “Barbiere di Siviglia” performed, albeit in dozens of seasons.

Donizetti had four operas performed each in multiple seasons through those decades – his iconic “Lucia di Lammermoor” and his three popular comedies – “L’Elisir d’Amore”, “Don Pasquale” and “Fille du Regiment”. But when it came to the operas of Bellini, the serious and comic operas of Rossini beyond “Barber” and Donizetti’s non-comic works besides “Lucia”, the cupboard was bare.

And what was in the cupboard, anyway? Consider “Lucia di Lammermoor”. The work was performed a total of 24 times in 13 of the seasons between 1932 and 1950, but only one person was cast in the role – Lily Pons, first appearing at age 34 and continuing on until her early 50s.

Whenever “Lucia” was scheduled, Pons sang it once or twice each in the main San Francisco season and often once or twice more on the season’s tour, always under the stage direction of Armando Agnini in Agnini’s stage settings that had been constructed for San Francisco Opera’s 1926 season. Since the 1943 season, the chorus director for each of these “Lucia” performances had been Kurt Herbert Adler, a Viennese musician who had left his native Austria in 1938.

(On one evening Pons had a cold so bad she could not perform, and, since Pons had no cover, a rather obscure retired opera singer living in San Mateo County was prevailed upon to substitute for her, but that was the only variation from the formula for two decades.)

Considering the number of seasons in which Pons appeared, she sang very few roles in San Francisco – Gilda in Verdi’s “Rigoletto”, the title role of Delibes’ “Lakme”, the Queen in Rimsky-Korsakov’s “Le Coq d’or” were parts associated with her.

She did take on the role of Marie in Donizetti’s “Le Fille du Regiment”, which was transformed (a pretty easy thing to do one must admit) into a vehicle for her expressing patriotic feelings for her native France, and during the early 1940s to sell war bonds to Americans in the fight against France’s Hitler-allied Vichy government.

And, as more than one famous artist has testified in archival materials available to students of the company’s history, San Francisco was out of the way of most centers of operatic production, took a lot of time to travel to, and historically paid artists less than the fees to which they were accustomed.

In Arthur’s recount, Merola had hired Tebaldi for the 1950 season and visited De Bellis for documentation of what she sounded like singing various arias. Merola then asked for him to play new recordings from tenors, which he found unimpressive, until De Bellis introduced him to the sound of Mario Del Monaco, whom Merola then set about to hire.

Merola, at least in this instance, seemed to be engaged in something like a blind audition, such as instrumentalists applying for an orchestra position might go through, to select one of his principal singers.

We will likely return to this Merola-De Bellis-Del Monaco vignette in the future. In a previous essay, cited at the end of these remarks, I noted the impact that the LP record had on the expansion of the repertoire. I also believe that the LP, and, more specifically, the opera divisions of major classical record companies – Decca, EMI and RCA Victor – greatly influenced casting in the leading opera companies.

Those companies did not passively sit by, I suspect, for an impresario to sift through samples of voices they liked, and perhaps engage an artist who recorded for them.

I think it is much more probable that communication was constant, with some inventory management on the record companies’ part – we have these names under contract, we are recording this and that work, we might be able to influence these stars’ schedule, so why not schedule the opera whose recording we are promoting and take the whole cast? – as well as using contacts with trusted impresarios for their future product development – whom have you come across that you believe will be a big star who is not yet under contract to one of the rival record companies?

I am prepared to argue that the combination of the advent of the LP and the accession of Adler in San Francisco and a few other impresarios in key positions throughout the world proved catalytic to the transformation of opera production in the postwar years.

This essay concentrates on the impact of this transformation on the bel canto operas, although we will explore its impact on other parts of the repertoire in later articles.

Adler, who had the San Francisco Opera general directorship thrust upon him – at first on an “acting” basis at Merola’s sudden death in 1953, was a refugee of the Hitler calamities that befell Europe in the 1930s and 1940s.

The crucibles for the operas that comprise the largest part of our standard repertory are the countries of Italy and France, Germany and Austria, and it was on the soil of these four countries that so much of the carnage and destruction of the Second World War took place. It took a decade after war’s end for some of the most important operatic companies to resume business.

It also took time to build new relationships among artists who had been residents of countries at war with each other, including the inevitable sorting out of which artists on the losing side might be judged as having gone too far in support of their nations’ war policies. Adler, well-versed in both opera and world politics, was a force on the side of reconciliation to the mutual benefit of both important artists and the San Francisco Opera.

In the meantime, Adler, himself an Austrian refugee, came to be at the helm of an important opera company, relatively secure financially, known always for being at the forefront of seeking the world’s best singers and conductors. The opera company, however, well-stocked with serviceable productions by Agnini and other colleagues of Merola, was not known for searching the world for production designers and stage directors.

Adler was not just an opera company administrator, he was a conductor who clearly worked with his conductor colleagues in choosing which artists to pursue. In constructing this essay on “bel canto” operas in the first four seasons of the Adler era, it might be interesting to concentrate on three such conductors – Fausto Cleva, Georges Sebastian, and Oliviero de Fabritiis.

Sebastian, a Hungarian born conductor had appeared at the San Francisco Opera in the mid-1940s (after Adler’s arrival there) conducting such operas as Richard Strauss’ “Salome” and “Der Rosenkavalier” and Mussorgsky’s “Boris Godounov”.

In the early years of the LP, Sebastian drew the assignment from Decca Records to conduct the first complete LP recordings of Delibes’ “Lakme” (with Mado Robin and Libero de Luca) and of Thomas’ “Mignon” (with de Luca and Janine Micheau).

For the first foray on his watch into the area of bel canto, Adler sought to introduce an important new artist. The choice made great sense on paper, even though it proved controversial. He enlisted the French coloratura soprano Mado Robin, star of Sebastian’s Decca recording, to open the season as Gilda in Verdi’s “Rigoletto” and additionally to be the first person to sing Lucia at the San Francisco Opera since Pons’ retirement from operatic performance.

(One observes that in the 1930 season Belgian Clara Clairbert sang the season’s single Lucia, and Robin sang the single Lucia in 1954, meaning that no one who was not a native French speaker had been cast as Lucia during a 25 season stretch. In fact, the first native Italian to sing Lucia at the San Francisco Opera was Margherita Rinaldi in 1968, during its 47th season.)

Robin, noted for the ability to hit high notes well above the expected range of any operatic soprano, liked to add a non-textual high B at the end of Gilda’s aria “Caro nome”.

Conductor Cleva made it clear he could not countenance such a change to Verdi’s music, and was furious when she sang the ultra-high B anyway on opening night, turning over the final performance of “Rigoletto” to another colleague. Bloomfield describes Cleva as “B-stung”.

My suspicion is that, had Robin’s reception in San Francisco been unambiguously positive, Adler would have revived “Lakme” – the production Pons used was still available – for her in a subsequent season. Even now in the 21st century, the Sebastian – Robin Decca recording retains interest, particularly since the opera, to the horror of the “French Opera is Dead” crowd, is beginning to be performed again.

Debuting in 1956, and holding sway over the Italian repertoire for the first post-Cleva season, was de Fabritiis, who, between 1938 and 1941 had conducted full length recordings of several important operas for EMI – including Puccini’s “Tosca” (1938), Puccini’s “Madama Butterfly” (1939) and Giordano’s “Andrea Chenier” (1941). Each of the three operas starred the illustrious team of Maria Caniglia and Beniamino Gigli, and the Giordano opera included Giulietta Simionato, Italo Tajo and Giuseppe Taddei in small character roles.

It was de Fabritiis that introduced Zandonai’s “Francesca da Rimini” to San Francisco. Originally intended for Renata Tebaldi, the title role was taken over by Leyla Gencer when Tebaldi fell ill.

Of greater significance for the world’s opera repertoire, it was de Fabritiis who was preparing Gencer for her first bel canto role, Lucia in “Lucia di Lammermoor”, to be performed at the end of 1957 in Trieste. As readers of this website know, Gencer found her preparation for the role of Lucia useful when she was called upon to step in for Maria Callas in San Francisco on short notice.

By 1957, when Adler had the title and duties of General Director formally bestowed upon him, the production itself began to be considered one of the most critical parts of the operatic experience.

The new productions that Adler first mounted were not from the bel canto repertory – Mozart, Richard Strauss, Poulenc and Puccini took precedence here. But, as we will see, new productions of bel canto works would come, strongly influenced by artists from Continental Europe.

In the meantime, the only other bel canto work in Adler’s first four seasons was a 1956 revival of “L’Elisir d’Amore” with Decca artist (and frequent Tebaldi co-star) Giuseppe Campora as Nemorino.

However, the bel canto performances for which so much of San Francisco Opera’s mid-century reputation was based, were to come in the subsequent years of Adler’s general directorship. Campora’s Decca colleagues Joan Sutherland and Luciano Pavarotti were to have much to do with this reputation.

And, finally, the San Francisco Opera performance history of Bellini’s works was to expand beyond its single “Norma” in the 1930s.