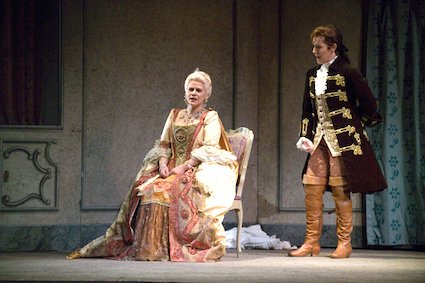 In my most recently posted review, I proposed that the wider world begin to recognize the San Francisco Opera as one of a limited number of the world’s opera companies with the capacity to produce Richard Strauss’ “Der Rosenkavalier” as it should be presented.

Tom, who has contributed his own reviews on this website of performances in other cities that I have not been able to attend, was so impressed by the June 24th performance in San Francisco (the one I also attended) that he has sent his own impressions of it to share with this website’s readership.

Tom, who lives in Southern California, has attended San Francisco Opera performances sparingly in recent years. Since he is a subscriber to the Los Angeles, Opera Pacific of Orange County and San Diego Operas, he routinely expects to see impressive operatic productions in those houses, most of which will not be presented in San Francisco.

Nor has he always regarded the expense of traveling to San Francisco and securing tickets to its Opera worth the effort, when sub-optimal performances in unappealing productions were the result. (One has confidence that current San Francisco Opera General Director David Gockley is determined to change the minds of Tom and other wary potential patrons of his company.)

But San Francisco Opera’s history of presenting “Rosenkavalier” in world class performances was a compelling argument for Tom to travel North. And, of course, this website, in previewing the 2006-07 San Francisco season at the time the productions were first announced, had pretty well pegged the “Rosenkavalier” as a “must see” event.

In my next post, I will add a feature that attempts to spotlight those productions in San Francisco and elsewhere, which, from my own experience, I would recommend to any person who appreciates world class performances of opera. These spotlight selections will be based on productions that I have already seen, particularly when the announced casts include artists in key roles whom I have seen in impressive performances within the last year of so.

(This will not be intended as an exhaustive list of what I would want to see, but productions that I can confidently predict, on the basis of personal experience, to be exceptional values in this age of high ticket prices and travel costs.)

[Below: Soile Isokoski (left) as the Marschallin with Joyce DiDonato (right) as the Count Octavian; edited image, based on a Terrence McCarthy photograph, courtesy of the San Francisco Opera.] 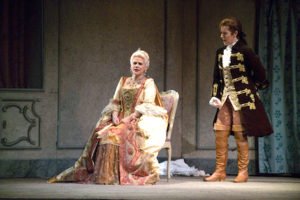 Every once in a blue moon, as the saying goes, we see something so sensational that we exclaim to all who will listen “It doesn’t get better than this!!!” I offer as examples the view of the Yosemite National Park coming from Fresno on Highway 41 on a snowy, crystal clear winter’s day and the rainbow-festooned view of the City of San Francisco and the Golden Gate Bridge just after a rainstorm, from the Sausalito viewpoint on Highway 101.

After what I regard as a long drought, the War Memorial Opera House was graced with a truly world class spectacle of monumental proportions, bringing to mind such previous San Francisco Opera triumphs as Robert Carsen’s 1989 production of Boito’s “Mefistofele” when Samuel Ramey, as Satan personified, emerged from the orchestra pit.

As another example, I offer the 2001 production of Wagner’s “Die Meistersinger”, presided over by Music Director Donald Runnicles in a knock-your-socks-off production of lavish scope, soul and emotion if there was one. (This is the opinion of an opera-lover who has seen “Meistersinger” at the Met, Munich, Deutsche Oper Berlin, Staatsoper Unter den Linden, Chicago Lyric Opera, Los Angeles and Seattle.)

When San Francisco Opera is on the mark, as with the “Mefistofele” and “Meistersinger”, it doesn’t get any better. Such was the matinee revival of “Rosenkavalier” with staging conceived by former San Francisco Opera General Director Lotfi Mansouri and Elizabeth Soederstrom, magnificently conducted by Runnicles.

Its elements included opulent sets and costumes inspired by Alfred Roller’s designs for the 1910 premiere, Mansouri-inspired comic-relief cameo scenes throughout, carried out by a cast obviously relishing the chance to ham it up. Yet the pace was studied, allowing this utterly sublime apotheosis of Romanticism to soar, to resonate, to breathe, to carry us away.

To this observer, Richard Strauss is the legitimate musical heir of Richard Wagner and “Der Rosenkavalier” shows this as no other work by this great composer, who, when confronted for his identification by an American lieutenant at his front door near Vienna at the end of World War II, told the young officer “I am the composer of ‘Der Rosenkavalier.'” Obviously, that is what Herr Strauss thought was all that needed to be said!

Given today’s realities, this production comes as close to ideal as any version of the opera I have seen over the years, and in my “best anywhere, ever” lexicon takes the place of honor. The elegantly boorish Baron Ochs (performed by Kristinn Sigmundsson of Iceland) equaled the fabulous antics of Walter Berry, who often graced San Francisco’s War Memorial Opera House.

The Marschallin of Finland’s Soile Isokosi gave a most convincing presentation indeed, with a voice a bit on the light side given the gravitas of this role. But she was extremely effective in the sublimely luscious music in the final act of this monument of Western Civilization, when she must part with her 17-year old lover Octavian.

As the tiny young page Mohammed fetches the monogrammed handkerchief that the Marschallin dropped earlier, I could not imagine there being a dry eye in the house at the end of this marvel. I say to the entire production team and every artist who made this wondrous production happen: “Bravi! Bravi!” Let this demonstrate the future course of the San Francisco Opera.

For William’s own perspective on this same performance, see: S. F. Opera – A Center for “Rosenkavalier” Excellence: June 24, 2007