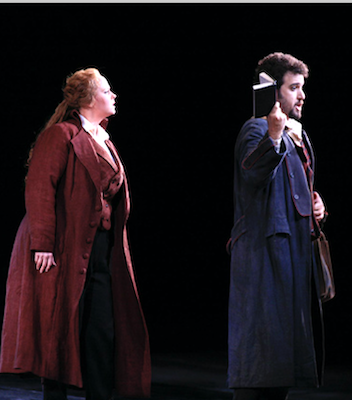 In recent decades, the San Francisco Opera has organized its performance schedules to present seven or eight operas as a “Fall Season” from September to December (and occasionally January) and another three operas in repertory as a “Summer Season” centered in June. Although originally the Summer and Fall seasons were administratively separated (you could subscribe to both or to one and not the other), financial considerations ultimately caused the attachment of each summer season to the previous fall season.

Subscribers thereby were assured their regular seats in both fall and summer, in exchange for the (not invariably welcomed) trade-off of being able to share some of the financial burden of both fall and summer fare. But hitching the summer to the previous fall season had other consequences. As an example, whose relevance to this page will become evident, the “post-season wrapups” of such commentators as the music critics of the local newspapers (more than one paper existed in the pre-Internet age) became an awkward enterprise.

To the extent that anyone regarded this as a dilemma, it was an unsolvable one. Opening night had to be in the Fall and the summer season, disconnected from the main season, seemed financially too precarious to let fend for itself. But devoting space in a Sunday paper to a music critic’s comparison of operas performed in the last week with those performed almost ten months earlier was not seen as anything that sold papers.

I actually liked reading the wrapups, and personally enjoyed posting a wrapup of my own on this website for the operas produced in San Francisco in 2006. However, when I did that wrapup, I had not thought of it as analogous to an Arthur Bloomfield or Robert Commanday summarizing a “business as usual” opera season for the Examiner or the Chronicle, a few days after attending their final opera performance for the year.

Instead, it was my intention to divine in what directions the new leadership of the San Francisco Opera was going, especially in the light of the extraordinary and very welcome pledge of the new General Director David Gockley to restore the artistic reputation of the San Francisco Opera to the glorious period from the mid-1950s to the beginning of the 1980s when it was run by Kurt Herbert Adler.

For last year’s wrapup, letter grades were assigned that were intended to reflect what one expected from one of the world’s great companies. One routinely expected an “A” from an Adler production, because he was always at the front of world production standards, while being uncomprising on artistic integrity and respectful of tradition. Securing most of the world’s great operatic talent at some point or another in their careers, Adler, with misfires here and there, gave you performances worth the money.

Gockley’s tenure began with the three operas of the Summer of 2006, that belonged to the 2005-06 season, and it seemed appropriate to include them in my wrapup of the first Gockley year, even though most of the casts and production details reflected choices of his predecessor, Pamela Rosenberg. The Fall Season in 2006 instituted some Gockley changes, but still reflected a mix of Rosenberg and Gockley cast and repertory choices. Rosenberg’s shadow diminishes further in 2007 and ultimately will fade away.

It seems a good time to connect some dots. Historically, opening night of the San Francisco Opera occurs in the week after Labor Day, and opening night remains one of the important dates on the social calendars of Bay Area elites. But the attendant social events of opening night are optional, irrelevant to the performances themselves, and, for most S. F. opera-goers, unbudgeted.

From the standpoint of the opera-goer, it seems more natural to consider that at the S.F. Opera there is a flurry of activity that begins in June that continues through December, with a mid-summer break in July and August. This is a little over half a calendar year. So, this website will continue to consider groups of operas performed in a single calendar year as that year’s “season”, at least until a major re-ordering of the operatic calendar (not expected) takes place.

When one takes on the responsibility of a website that is read in many parts of the world, it takes some planning as to what happens next, and what after that, etc. One of the things I had planned to do was to have a “wrapup” of the 2007 season. Feedback to my site suggests that many readers like my long, detailed performance reviews. But these take time to write. Since some website readers know I have attended a performance, I get other inquiries as to how soon my review will be posted.

So, with this commentary page, I will institute something new. As each S. F. opera production is attended, within a day or two I will post a letter grade, with an accompanying paragraph defending that grade. The first three, for the opening night of the Summer Season and Sunday matinees of Gluck’s “Iphigenie en Tauride” and Richard Strauss’ “Der Rosenkavalier”, are posted below. During the Fall, I will continue to assign letter grades to the S. F. Opera productions, using a scale consistent with those of the 2006 rankings.

Don Giovanni (Mozart) – Mariusz Kwiecien’s indelible image as a demonic Don Giovanni, prancing about the new production by David McVicar, earns his place in the San Francisco Opera pantheon of immortal performances in this role. As an opening night surprise, Adler Fellow Elza van den Heever made a triumphant debut (her first appearance on any major opera company’s stage) as Donna Anna and won a sustained audience ovation.

[Below: Leporello (Oren Gradus, right) arouses the curiosity of Donna Elvira (Twyla Robinson, left) by showing her the catalogue of his boss’ sexual conquests; edited image, based on a John Lee photograph, courtesy of the San Francisco Opera.] 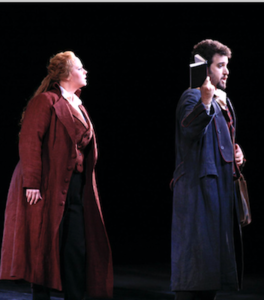 Der Rosenkavalier (Richard Strauss) – Conductor Donald Runnicles led a performance that exceeded even the high standards of the San Francisco Opera, a company with a long history of presenting “Der Rosenkavalier” as intended. He opened many of the traditional performance cuts imposed on this opera. The rivals Octavian and Ochs were played by as convincing a pair of singing actors (Joyce di Donato and Kristinn Sigmundsson) as have ever appeared here in those roles, Sigmundsson playing Ochs, not as a lout, but a nobleman with a considerable degree of class. The two objects of Octavian’s attentions were enchantingly sung by Miah Persson, the Sophie, and Soile Isokoski, the Marschallin, both of whom joined di Donato in a memorable last act trio. Deep casting resulted in noteworthy performances by Jochen Schmeckenbecher (Faninal), Bruce McPherson (Italian Tenor), David Cangelosi (Valzacchi), Catherine Cook (Annina), Heidi Melton (Marianne) and Jeremy Galyon (doubling as the Notary and Police Commissioner).

Iphigenie en Tauride (Gluck) – The opera is a museum piece, but the best museums house priceless treasures. Susan Graham is peerless in late 18th century roles such as Iphigenie. Bo Skovhus as her brother Oreste and Paul Groves as his soul-mate Pylade prove that Gluck’s later operas can delve into psychological realms and, with beautiful music sung with dramatic flair, can hold audience interest. Producer Robert Carsen, absent from San Francisco for almost two decades since his wildly successful conceptualization of Boito’s “Mefistofele”, has proposed some tentative solutions to the riddles of mounting this opera for contemporary audiences. The chorus is moved to the orchestra pit, where the extraordinary talent of Conductor Patrick Summers holds sway over chorus and orchestra. The principals on stage are joined by a troupe of over two dozen dancers. An almost constant presence, the dancers move the action along, and help bring these characters from classical Greek drama to life.

Right now, the cumulative average for 2007 is a high A. I do not grade on a curve, and, of course would be delighted if the cumulative average score remains at that level. I will combine these grades and their accompanying paragraphs on a new page in the “William’s Commentaries” section of this website, after I have posted the full reviews of the three operas of San Francisco’s 2007 Summer Season, and that page will be revised until all of the 2007 operas have been seen. Readers should return to that page from time to see what has been added.