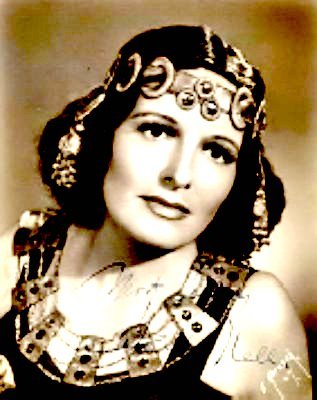 When purchasing a ticket for an opera, the opera company’s often includes the statement that “casts and operas are subject to change”. Over time, opera goers inevitably will experience cast changes, such as I did earlier this year at Houston’s “Faust” (see my review elsewhere on this website). But how often does an opera company change the opera itself, especially on short notice?

I have known three occasions, all involving the San Francisco Opera. As the most extreme example of an opera impresario’s agony, Kurt Herbert Adler found himself with an indisposed Elsa (Hildegard Hillebrecht) for a scheduled performance in 1965 of Wagner’s “Lohengrin”, and found no one in the world able to produce an Elsa in time for the performance.

His solution? Noting that a performance of Rossini’s “Barber of Seville” was the next opera on the subscription series of which the “Lohengrin” was part and that all members of the “Barber” cast, who had performed the previous night, were healthy and accounted for, he reversed the dates of the two performances, allowing time for Frau Hillebrecht to recover.

As a result, the “Barber” cast had to perform on consecutive nights and “Lohengrin” then had to be performed twice the next week with only a day’s rest between, but that seemed a better alternative than cancelling the first “Lohengrin” altogether.

Presumably, most of the subscribers themselves were indifferent to the order that they would see those two operas. However, the subscribers are not the only persons that attend a given performance. You might imagine the anger that the opera house doormen and ushers experienced (and I had the testimonial of one such doorman) when those patrons who were NOT indifferent discovered that the Wagner music drama for which they purchased a ticket was now a Rossini opera buffa and vice versa.

Maria Callas had been scheduled to make her debut at San Francisco Opera in September, 1957, performing four times in San Francisco, and, on the San Francisco Opera’s post-season tour of Southern California, to perform three times at the Shrine Auditorium in Los Angeles and once at the Fox Theatre in San Diego. When she failed to show up for rehearsals in September for “Lucia di Lammermoor”, Adler fired her and, in cooperation with the Chicago Lyric Opera and New York Metropolitan Opera, invoked a lockout of Callas in the major United States opera houses.

[Below: Maria Callas; resized image of an historic photograph.] 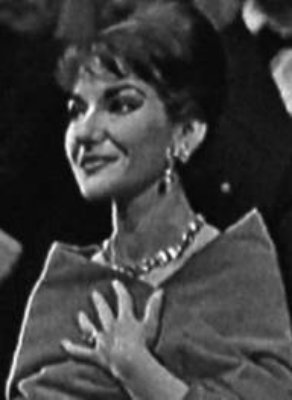 No opera company general manager wants ever to be forced to change an opera, and there will be various strategies to safeguard the opera company against the illness or indisposition (not always the same thing) of a scheduled performer. One strategy is to have a cover somewhere nearby, which becomes one of the great advantages of having an “artists-in-residence” program, such as one sees at the Met, San Francisco, Houston and elsewhere.

Sometimes the cover is a person who knows the critical role, but is performing in one of the opera’s supporting parts. In 2000, Paolo Gavanelli became ill for a San Francisco performance of the title role of Verdi’s “Simon Boccanegra” and Nicholas Putilin, who performs Simon at the Mariinsky Theatre/Kirov Opera, was cast as Paolo, who was in turn covered by one of the company’s younger singers. With Putilin as Boccanegra and a new Paolo, the performance proceeded with minimum despair.

One suspects that these days every general manager has some sort of plan for replacing every important cast member of an opera they are producing. And, I suspect, that the more problematical an important opera star is (such as an artist who is known to cancel a lot for illness or other reasons), the more effort goes into having carefully developed contingency plans. If one is really suspicious of an artist, I would imagine, the opera company would have taken multiple steps to safeguard against the consequences of a cancellation.

Earlier this month, in preparing a tribute to the Young Rysanek at San Francisco Opera in the 1950s, as well as a contemporaneous one for Leyla Gencer that will appear on this website later this month, it struck me that Adler had developed what in retrospect seems to be some fairly obvious defenses against Callas cancelling her 1957 San Francisco debut season.

Adler had scheduled Callas to perform two parts, Lady Macbeth in Verdi’s “Macbeth” and the title role in Donizetti’s “Lucia di Lammermoor”. There are not ever a great number of divas that sing these two roles (and almost none that sing both). But there was a great Lady Macbeth in 1957 besides Callas, and that was Leonie Rysanek, who had just made a studio recording of the role with the reigning Macbeth, Leonard Warren. There was also an important rising star that was preparing the role of Lucia for performances in Trieste later that year, to be conducted by a conductor associated with the San Francisco Opera. That Lucia-to-be was Leyla Gencer.

Rysanek was engaged to open the 1957 season on September 17th in the title role of Puccini’s “Turandot”. After that set of performances she was scheduled to rehearse the San Francisco premiere production of Strauss’ “Ariadne auf Naxos”.

Leyla Gencer had been engaged as Violetta in Verdi’s “La Traviata”, opening September 19. Her assignments for the rest of September consisted of student matinee performances of that opera, requiring her to be there during the entire time that Callas was to be there. Those early October assignments for Gencer and Rysanek meant that there was no opportunity to leave San Francisco, so that they would be around when the tours of Los Angeles and San Diego were to begin in late October.

Callas was to sing her first Lucia on September 27 and her first Lady Macbeth on October 11. When she did not appear for rehearsals of “Lucia”, Adler fired her. He did not need to search the world for a replacement for Callas as Lucia, because Gencer was there, nor did her have to search for a Lady Macbeth, because Rysanek was there. I suspect that there was never was an explicit agreement that either artist was covering Callas, but they were international artists, and both knew exactly which roles they shared with the temperamental diva.

So, it appears to me that Adler had “Callas-proofed” his season very effectively. It also appears to me that he had NOT “Stella-proofed” it. When Antonietta Stella’s emergency surgery required cancellation of her scheduled performances of Amelia in Verdi’s “Ballo in Maschera” and the title role in Verdi’s “Aida”, this created a real crisis for Adler. Rysanek rose above the line of duty by adding two additional performances – her German-language Amelia and an Aida, and Leontyne Price’s star also rose in the firmament when she took on two performances of the latter opera in San Francisco and one on the Los Angeles tour.

[Below: Soprano Herva Nelli as Aida; resized image of an historical photograph.] 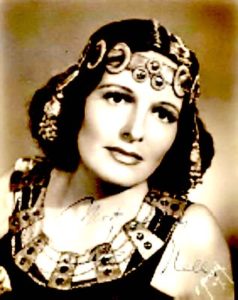 However, the longer-term solution to Stella’s emergency operation was engaging Herva Nelli to complete Stella’s obligations as Aida and Amelia, including the Southern California tour. The tour had been scheduled to perform in San Diego on two nights a week apart – with Gencer singing Violetta and Callas singing Lucia. Callas’ cancellation and replacement by Gencer meant that San Diego would have two separate visits by the Turkish diva.

The spacing of Gencer’s performances would have permitted her to have performed in a San Diego “Lucia”, and, judging from her spectacular performance as Lucia that I saw three days later at the Shrine Auditorium, it almost certainly would have been a great success. However, the disappointed ticket-holders had expected Callas, and having an unknown name (Gencer was not a household word in Southern California in 1957, and most of the other remaining members of the “Lucia” casts were relatively unknown) twice in a week’s time for the only two performances of San Francisco Opera in San Diego that year, surely had to have bothered the promoters in that tour city.

The promoters likely slept easier when offered the prospect of replacing the “Lucia” with a performance of Verdi’s “Aida” that would have at least three familiar names to the San Diego audience – soprano Herva Nelli in the title role, the superb mezzo-soprano Blanche Thebom as Amneris, and veteran basso Nicola Moscona as Ramfis. All three had been stalwarts at the Metropolitan and San Francisco Operas. Nelli’s star turn in five Toscanini NBC Orchestra performances were among the early LP recordings of complete operas. Unfortunately neither the tenor, Eugene Tobin, nor the baritone, Umberto Borghi brought any star power, and the latter did not even bring good performance reviews from his efforts earlier in the season.

Looking at the situation retrospectively, I, of course, would have wished that Nelli, whose voice to me never really seemed right for Aida, would have switched the Los Angeles and San Diego Aidas with Leontyne Price, who had a perfect voice for the role. But in September, 1957 Price was no better known than Gencer, and Nelli was at least a Callas substitute of whom many people had heard.

The singers generally met the audience’s expectations. This was the only time that I had a chance to hear Nelli, Thebom and Moscona in live operatic performance, and I am happy to have heard them. It is a consoling thought that I was to see Price in “Aida” and most of her other great Verdi roles over the next three decades.

[Below: Blanche Thebom was the Amneris; resized image, based on a historical photograph.] 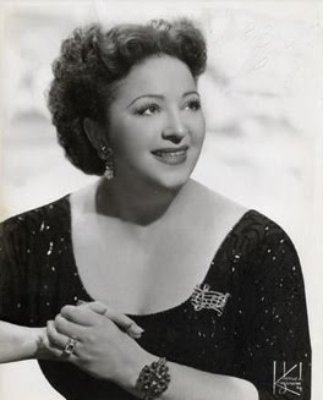 But whatever quantities of thought went into who would sing the roles, apparently a lesser amount went into how they would stage this iconic grand opera in the Fox Theatre. The most vivid memory of the staging was the triumphal march, which consisted of nine spear-carrying men walking diagonally across the stage, circling, then walking off the opposite side.

As noted elsewhere in this website, it is my plan to attend a performance somewhere in the world of each opera whose 50-year anniversary I am observing. For “Aida”, I have scheduled a return to San Diego in April, 2008 to observe the San Diego Opera’s revival of their production directed by Garnett Bruce in what I expect will be a more appropriate staging than what San Francisco Opera cobbled together for San Diego 50 years ago.

As a personal note, not only did the San Francisco Opera’s tours to San Diego provide my first opportunity to see Verdi’s “La Traviata”, “Aida” and “Otello”, but the San Diego Opera’s Verdi Festivals during the year’s between 1979 and 1985 were the place where I saw six other Verdi operas for the first time, for a total of nine first seen in San Diego.

The San Francisco Opera tour to the Los Angeles Shrine Auditorium, resulted in my first performance of a tenth, with an 11th performed by the Los Angeles Opera at the Dorothy Chandler Pavilion. San Francisco Opera introduced me to 11 other Verdis at the War Memorial, so, with another first at the Met in New York City, I have seen 23 Verdi operas, 22 for the first time in California, each with great international casts.

Since I regard “Jerusalem” as a redo of “I Lombardi” and “Aroldo” as a redo of “Stiffelio”, I count only 26 Verdi operas total. Any opera company planning future performances of “I Due Foscari”, “La Battaglia di Legnano” and “Alzira” should alert me, as I would be very interested in bagging all three of those also.

For a review of that season’s other Verdi opera at the Fox, see: