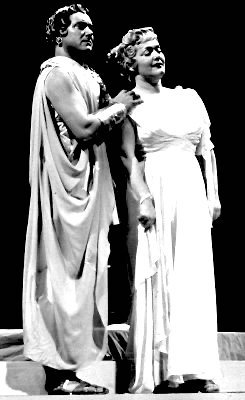 Leonie Rysanek, in the second of four seasons that she performed with the San Francisco Opera in the last half-decade of the 1950s, introduced Richard Strauss’ “Ariadne auf Naxos” to Los Angeles at its famous 6500-seat behemoth, the Shrine Auditorium. “Ariadne” was one of two new productions designed for Rysanek to premiere the two most important post-“Rosenkavalier” Strauss operas at the San Francisco Opera. 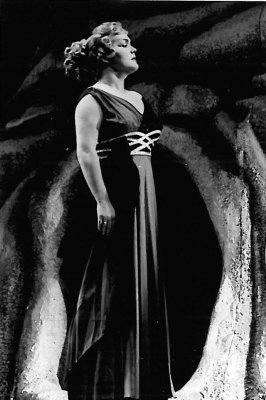 In 1959 she was scheduled for the American premiere of Strauss’ “Die Frau ohne Schatten”, but illness prevented her from traveling to the United States that season. San Francisco Opera impresario Kurt Herbert Adler substituted another (not famous) soprano, but revived “Frau” again the very next season, when Rysanek was able to come and perform.

Rysanek had made her San Francisco debut in September, 1956 at age 29. Although Rysanek’s relationship with the San Francisco Opera was a long one, it might be characterized as having had three separate phases. The first was during the 1956-1960 period and was characterized by a wide-ranging repertoire of German and Italian works.

The second period began in 1973, at age 46 and, with a few exceptions centered on those great soprano roles of the Wagner and Richard Strauss repertoire that she regarded as appropriate to her large and dramatic voice.

The final phase encompassed the great character roles that some famous sopranos take on in late career, including Ortrud in Wagner’s “Lohengrin”, Herodias in Strauss’ “Salome”, the Countess in Tchaikovsky’s “Pikovaia Dama” and Kolstenicka in Janacek’s “Katya Kabanova”.

I saw Rysanek perform three roles during what I describe as her first San Francisco Opera phase when she was respectively 29, 30 and 33 – Sieglinde (1956) in Wagner’s “Die Walkuere” and Ariadne (1957) at the Shrine Auditorium and the Koenigen in “Die Frau” (1960) at the War Memorial Opera House.

The 1957 season was one of great stress and triumph in the history of the San Francisco Opera. Rysanek had been scheduled to open the season with Puccini’s “Turandot” and to introduce Richard Strauss’ “Ariadne auf Naxos” to San Francisco and to Los Angeles on the S. F. Opera tour of the Southland.

Just before dress rehearsals for “Lucia” were to begin, it became evident that Callas was not coming to San Francisco. Although she said she was ill, she had enough strength to devote several days when she was supposed to be in the Bay Area to a studio recording of Cherubini’s “Medea” in Europe and to attract press attention as she partied with Elsa Maxwell in Venice.

San Francisco Opera General manager Kurt Herbert Adler fired her (and invoked a pact with the Chicago Lyric and Metropolitan operas to prevent her from performing in the major United States opera companies). Then, Stella was felled with an appendectomy and it appeared the season would be an annus horribilis.

It helped, however, that Adler had Rysanek, one of the greatest soprano voices in 20th century opera, for several weeks in residence in San Francisco and available for the Southern California tour, and that he was able to secure Leyla Gencer, another of the greatest sopranos to substitute for Callas as “Lucia”.

Rysanek cheerfully replaced Callas and Stella for some of their scheduled performances, in addition to singing the roles for which she had been engaged. It also helped that Leontyne Price, who was soon to be recognized as another of the greatest 20th century sopranos, had joined the roster also.

Price’s operatic career up until then had been concentrated in Gershwin’s “Porgy and Bess”. Adler invited her to leave Gershwin’s Catfish Row for Paris’ Place de la Revolution to take part in the San Francisco Opera (and American) premiere of Poulenc’s “Dialogues of the Carmelites”.

Her substitution for Stella in two of the “Aidas” helped establish her long and important relationship with the San Francisco Opera, which, later in her career, she publicly described as her “home company”.

However, it was Rysanek and Gencer who were awarded the “saves” for the season. I will have more to say about the latter in my 50-year anniversary of her substitution for Callas as Lucia at the Shrine.

Unlike Gencer, whose recorded legacy is based on “off-the-air” tapes of live broadcasts or surreptitious “pirate” recordings, Rysanek made contemporaneous studio recordings of many of the roles she sang in San Francisco in those four seasons.

These include “Ariadne auf Naxos” with Sena Jurinac, Jan Peerce and Roberta Peters, conducted by Erich Leinsdorf, and recordings of Wagner’s “Die Fliegende Hollaender” conducted by Antal Dorati, Strauss’ “Die Frau ohne Schatten” (the earlier of two performances of this work with Rysanek conducted by Karl Boehm), and Verdi’s “Macbeth”, conducted by Leinsdorf. 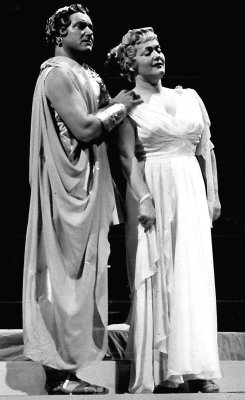 For those persons, such as myself who witnessed her 1956 performances as Sieglinde in Wagner’s “Die Walkuere” with Ludwig Suthaus, Birgit Nilsson and Hans Hotter, one has access to two extraordinary recordings from the 1950s, each with two of these principals – the recording conducted by Wilhelm Furtwaengler (who died soon after its completion) in which Suthaus and Rysanek played the Waelsungs and that conducted by Georg Solti, starring Nilsson and Hotter as the gods.

(In these days of CD reissues, iPods and iTunes, it became rather easy for me to develop whole sections of a “performance” that used these four principals onto my iPod, merely by importing Hotter and Nilsson from my Solti CD and downloading Suthaus-Rysanek sections from iTunes, which has most sections of the Furtwaengler CD loaded at the iTunes store.)

Rysanek’s 1950s studio recordings do have their detractors. The principal criticism (at least as I would characterize these remarks in the aggregate) is that, while Rysanek had a gleaming upper register, her lower and middle register were often very tentative and not of the same calibre as the top.

Listening to her 1950s recordings anew, I am not convinced that the criticism is really warranted. If deficiencies did exist, however, she addressed them. In later years, in fact, she concentrated on mezzo character roles that lie squarely in the middle register.

But I can understand that a person, who is analytical about each note he hears in a studio recording, particularly when he has the opportunity to replay a phrase over and over, would have had an entirely different reaction to Rysanek in a live performance in a major opera house.

In this environment her beautiful high notes, her dramatic phrasing, and the intensity of her acting would leave a powerful impression that would overwhelm one’s memory of how her F above Middle C sounded.

But how about her as a Saleswoman for what was then unfamiliar Strauss territory? Her Ariadne was a triumph. It is a luscious opera, which continues to grow in popularity throughout the world. George Jenkins (who produced the extremely successful new production of Mozart’s “Cosi fan Tutte” the previous year [see Cosi Fan Tutte – October 25, 1956]) conceptualized the production that introduced it to San Francisco and Los Angeles.

In the opera’s prologue, that San Francisco Opera presented in English that year (with the Opera itself in German), Rysanek was able to parodize the world of famous operatic divas that she, herself, comfortably inhabited, playing the character of the Prima Donna.

Since the Prima Donna in the Opera itself performs the great dramatic role of Ariadne, whoever is cast as in that part, is almost certainly a dramatic soprano like Rysanek who rarely gets the opportunity to perform the kind of comedy that is afforded by this Prologue.

Besides the double roles of the Prima Donna/Ariadne and the Tenor/Bacchus (Richard Lewis) are the juicy roles of the Mozart-inspired character of the Composer (Helen George), as well as the performers in the the commedia del arte group (with Rita Streich’s Zerbinetta and Heinz Blankenburg’s Arlecchino as particularly memorable performances).

As deeply cast as one would expect of a European opera festival, the San Francisco Opera’s premiere of “Ariadne” was an impressive introduction to California of this endearing Strauss opera. It is an opera that San Francisco has done well every time it has presented it since. 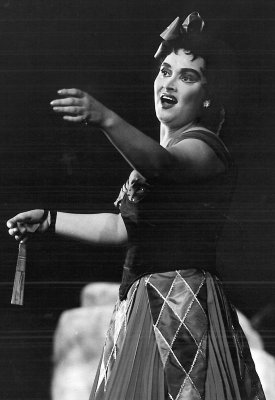 However, I believe that, paradoxically, “Ariadne” actually benefited from the Callas cancellation. With Rysanek assuming the role of the San Francisco Opera’s number one heroine of the 1957 season, interest increased in the opera that was originally intended to be the highlight of her season.

At the beginning of the season, I had tickets to see both “Ariadne” AND Callas’ “Lucia”, but I bet at least some of the persons in that Shrine performance of “Ariadne” were there because of the buzz about Rysanek, rather than any particular early interest in this ultimately very rewarding opera.

And what did the Shrine audience see? One of the highlights of the amazing early career of the youthful Leonie Rysanek with the San Francisco Opera company.

Below is listed the Young Rysanek’s First Phase performances with San Francisco Opera:

* See discussion of thls operatic performance in the “50 Year Anniversaries” category of this website.