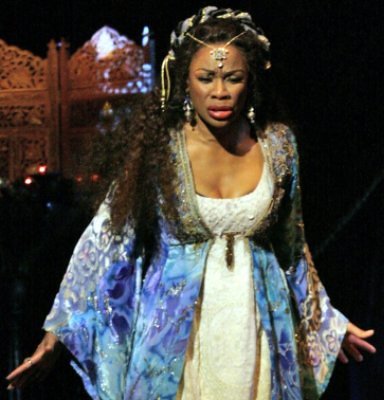 Many operatic artists of the first rank, and that seems an entirely appropriate category for Denyce Graves, have “signature roles” through which they gain public esteem. Ms Graves is a renowned Carmen, but has chosen Dalila as her particular specialty. Besides being an artist of high integrity, who approaches the treasures of the French repertoire reverentially, she is also a savvy promoter of those works that interest her. 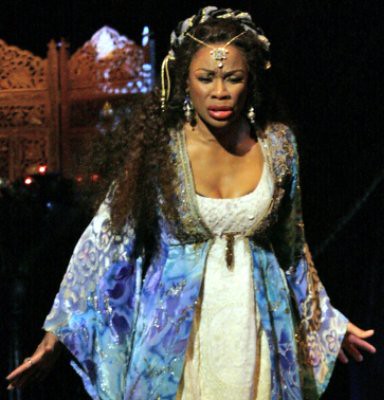 Opera impresarios have come to recognize that this performer, whose musicianship was cradled in an African American Church in a low income neighborhood of Washington, DC, is one of the comparatively few contemporary artists with the drawing power of the operatic super-stars of past years. Secure in her popularity, she accepts engagements at opera companies large and not-so-large, but in the roles she wishes to sing.

One such company is the San Diego Opera, which mounted Saint-Saens’ “Samson et Dalila” for Ms Graves in late February, 2007. I was lucky enough to secure tickets for its third performance, because demand for tickets for the four performances greatly exceeded supply.

With her Dalila and that of Olga Borodina, the seductive charms of “Samson et Dalila” are delighting opera audiences (and selling out houses) throughout the world. In the last year or so, it seems quite likely that “Samson” has displaced Massenet’s “Manon”, at least for the time being, as the world’s third most performed French opera. (The shade of Saint-Saens is likely having a great time poking fun at the shade of his earthly arch-rival, Massenet.)

Graves alone has performed Dalila at the Met, the Los Angeles Opera and Chicago’s Ravinia Festival with Placido Domingo, and at the Royal Opera Covent Garden and the Washington National Opera with Jose Cura. In recent months she has been on something like a grand tour as Dalila, performing with the opera companies of Philadelphia, Dallas, Orlando and Miami.

If there are lots of Dalila performances, there is, of course, the need for more tenor voices that can master the French heroic style – thus, Clifton Forbis, Jon Villars and others have joined Cura in taking on the role for a post-Domingo age.

Forbis was San Diego’s Samson. He has the stamina to make a go of this classic heroic French tenor role, who, from the very first notes must sing at full voice in the high end of the tenor range, and yet within a few measures be able to blend his voice in the extraordinary trio between himself, Dalila and the Old Hebrew, in this production played by the Brazilian basso, Jose Gallisa.

Cast in one of the great character roles of the French repertoire, Gallisa had first appeared two seasons ago as an impressive Nourabad in Bizet’s “Les Pecheurs de Perles” (see the link to my review of this masterwork at the end of this review). In “Samson et Dalila”, the Old Hebrew is the manifestation of Samson’s honor, duty and responsibilities to the people he has been chosen by God to lead. Clearly conscious of the Old Hebrew’s strong disapproval of her influence over the Jews’ powerful leader, Graves’ Dalila approaches Samson with Gallisa’s character standing a pace away, then kneels and takes Samson’s arm.

The music written by Saint-Saens to accompany Dalila’s psychological aggression and the wrenching (and, of course, very different) reactions of the two men not only is beautifully written, but is crafted to reveal the torment that Samson is experiencing. A great Samson must be capable within a brief time period to go from the stentorian opening bars of his first appearance to this revelatory trio without apparent vocal effort, yet convey through his acting a man in personal turmoil.

With the memory of Placido Domingo’s Samson still vibrant (and his performances at age 39 at the San Francisco Opera and then 18 years later at the New York Metropolitan Opera documented on DVDs), some regard Forbis as his successor in this role. Forbis has been cast as Samson, with Borodina as Dalila, to open the fall season of the San Francisco Opera in seven months, in the production created in 1980 for Domingo. As the evening progressed one saw evidence of his promise of indeed becoming a first rank Samson. 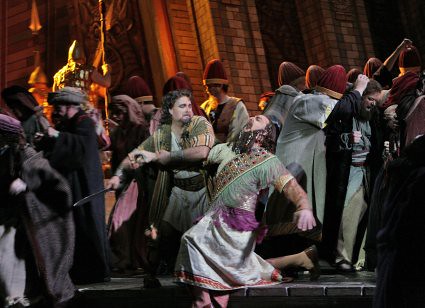 Samson is present in every one of the scenes of the opera. In Act I he appears as the warrior leader of an enslaved people who murders with his bare hands the slave overseer Abimelech (another fine performance by San Francisco Opera’s utilitarian basso, Philip Skinner). In Act II Samson is the passionate lover of one of legend’s great temptresses. In the final Acts he first displays the emotional pathos of an utterly destroyed great man, and then the final exhilaration of vengeance, performing an act of mass murder-suicide that hits at the heart of the civilization of his enemies.

Forbis convincingly assayed the lyricism of his second act seduction by Graves’ Dalila, where the tenor is required to project a conflicted soul, who still displays ambivalence even as his passionate desire for Dalila is manifested. (If a man wants to show his determination to resist temptation, he is unlikely to be convincing to his temptress if he has traveled a long and dangerous road to spend time with her.)

But a true test of a great Samson is the solo scene that begins the final act, where Samson, blinded and chained to to the axle of a giant millstone wheel, for which he must use all of his remaining bodily strength to push around a circle, laments the weakness that caused him to betray his religion and his people as the chorus of his countrymen outside express the same sentiments.

In this scene (and the opera’s denouement in which, chained to the temple’s columns, he regains his strength and literally brings down the house), one became convinced that this tenor from Tennessee is a valuable addition to the small list of singers who can conquer the demanding French heroic tenor roles.

[Below: Greer Grimsley as the High Priest of Dagon; edited image, based on photograph, courtesy of San Diego Opera.] 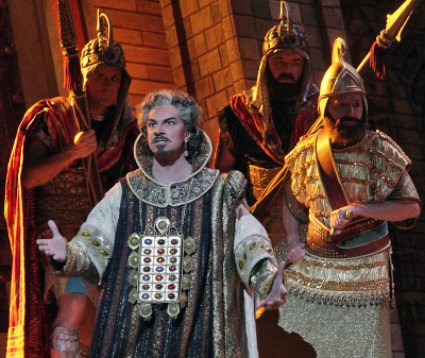 The third principal role in the opera is the High Priest, sung by Greer Grimsley. This is the second time I had seen Grimsley in a San Diego Opera presentation, the first being his debut role of Telramund in Wagner’s “Lohengrin” in 2000. (He subsequently was Don Pizarro in Beethoven’s “Fidelio”.) He is a consummate actor and the San Diego Civic Theatre is a good house for Grimsley’s voice. Grimsley left a strong impression in a role that some singers have figured out how to make dull.

For a grand opera, “Samson et Dalila” has a relatively small cast. Three small comprimario roles that occur in the first act contribute rhythmic and exotic vocal lines to Saint-Saens mesmerizing music. The artists singing these roles, Bryan Register as the First Philistine, Scott Sikon as the Second Philistine and Joseph Hu as the Messenger, all were worthy of mention.

I have had the fortune to attend performances of this opera with an excellent Samson and excellent Dalila or, alternatively, with an excellent Samson and a mediocre Dalila. The former combination, represented by the all-stars Placido Domingo and Shirley Verrett and the formidable Russian team of Sergei Larin and Olga Borodina, makes the opera immeasuribly more enjoyable. The latter examples include the exciting James McCracken and the authentic French heroic tenor Guy Chauvet, each playing against an inadequate Dalila. Since Forbis did a fine job as Samson, I thankfully cannot report as having witnessed an instance where an excellent Dalila was playing against an inadequate Samson.

What I can report is that those persons who saw Graves’ Dalila in San Diego were present at one of the truly great operatic characterizations of the 21st century. She was secure throughout her range, with a command of both the lower register and the upper notes of the mezzo range. Her Dalila was beautifully sung and acted with the self-assurance of a famous film star. At one point, as she reflected on her character’s cunning, she delighted the audience with a soft, but evil, laugh.

The production was a modification of the 1980 San Francisco Opera production by Douglas Schmidt, whose revival in recent years I regard as important enough for a page of commentary devoted to it, and to the luxurious and very expensive costumes created by Carrie Robbins. (I will post my essay on Regional Productions of French-style Grand Opera later this year.)

Working around the parameters set by the Schmidt production were the stage director for this set of performances, Lotfi Mansouri, and the choreographer Kenneth von Heidecke, who respected the intent of their counterparts at the San Francisco production’s 1980 premiere, Nicholas Joel and Margo Sappington, in their approaches to integrating chorus and ballet into the action. The popular San Diego Opera conductor Karen Keltner shared honors for a splendid performance with the San Diego Opera orchestra and chorus (the latter under the direction of Chorus Master Timothy Todd Simmons). The lighting designer, a veteran of the original San Francisco production, was Thomas Munn.

There are few opera goers that can report that a performance of “Samson et Dalila” is the second Saint-Saens opera that that person has seen performed by a particular opera company. San Diego Opera is one of the world’s only currently existing institutions that boasts two Saint-Saens operas in its performance history.

It was 24 years ago that San Diego Opera commissioned The New Yorker’s music editor, Andrew Porter, to create a performable English translation of Saint-Saens’ mellifluous “Henry VIII” to star Sherrill Milnes, Christina Deutekom, and Jacque Trussel, among others. This followed a successful English translation by Porter of Ambroise Thomas’ “Hamlet”, which then San Diego Opera impresario Tito Capobianco mounted for Sherrill Milnes and Ashley Putnam.

San Diego’s “Henry VIII” was the opera’s United States professional premiere. Another neglected work from those first decades of the French Third Republic, Emmanuel Chabrier’s “Gwendoline”, had its American Premiere at the San Diego Opera only four months earlier.

Although current San Diego Opera General Director Ian Campbell’s French opera choices have tended to be more mainstream, he has not wholly ignored the less-traveled French repertoire. He persuaded the ultra-chic fashion designer Zandra Rhodes to create a new production (with considerable attention to recent musicological research) of Bizet’s “Les Pecheurs de Perles” (which he had presented several years earlier in San Diego in a different production). The Rhodes take on Bizet’s operatic pearl was subsequently been seen at San Francisco Opera and in New York and Detroit (and whose revival at San Diego Opera is promised for the not too distant future).

For my comments on another San Diego Opera excursion into French opera, see: A new look for Bizet’s “Pearl Fishers”: Zandra Rhodes in San Diego & S.F.