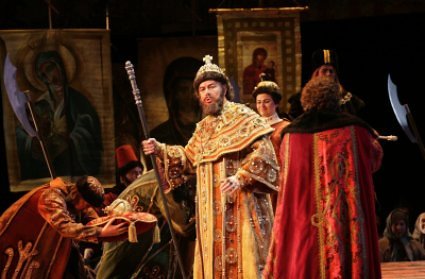 For the past 35 or so years, opera companies in the United States and throughout the world have been experimenting with versions of Mussorgsky’s “Boris Godunov” other than the elegantly re-orchestrated version by Mussorgsky’s close friend, Nikolai Rimsky-Korsakov, that held the world’s stages for nearly a century.

A common theme underlay each experiment – to find something that was closer to the original harmonic structures and ideas that Mussorgsky intended, but was sophisticated enough in sound that audiences be spared from listening to what apparently most everyone thought must be pretty amateurish music by an untutored genius.

In the last few years, the Mariinsky Theatre’s Valery Gergiev, decided to record in full both of Mussorgsky’s two versions of the opera. One was the original that Mussorgsky wrote in 1869, but which had been rejected by those Russian authorities who made every call as to which operas could be produced and which not. The second was the revised and substantially augmented version of 1872, which includes several scenes not part of the 1869 version (and omits one that is).

Those recordings proved to be revelatory, and should convince almost everyone that Mussorgsky, himself, is an excellent final arbiter of what his music should sound like, and that none of the famous composers who took it upon themselves to revise his music, can be said to have really improved upon it.

[Below: Ferruccio Furlanetto as Boris Godunov.  Edited image, based on photograph courtesy of San Diego Opera.] 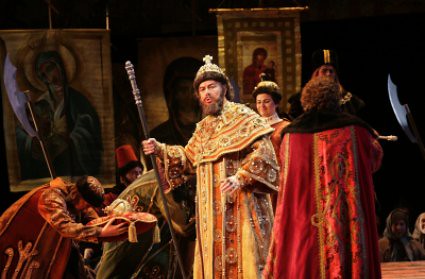 At the end of 1999, the Italian basso, Ferruccio Furlanetto, who had learned the 1869 version for the Vienna Staatsoper, was forced to learn the 1872 version quickly when a change of conductors in Vienna led to a decision with short notice to go with the opera’s later permutation. A consummate artist, presently at the height of his artistic powers, Furlanetto has developed a special relationship with the San Diego Opera’s Ian Campbell, and obviously prevailed upon him to mount the 1869 version for him.

It was the 1869 version that the Kirov Opera’s Mariinsky Theatre presented at the Orange County Performing Arts Center for three performances three and a half months ago (see Tom’s Review in the Guest Reviews section of this website), so Southern California in less than four months was able to see two absolutely different readings of the first version of the greatest Russian Opera – a version that even the most ardent admirers of Mussorgsky might not ever have the opportunity to experience.

I came to San Diego with a prejudice shared with, I suspect, most of the world’s Mussorgsky partisans – that it was his call as to what music should be in or out of his opera, and that the 1872 version, which is much longer and was extensively revised from the “unsuccessful” 1869 version, is the version for live performance. However, I left persuaded that Mussorgsky’s original work is an extraordinary piece in its own right.

Unlike the Mariinsky’s “Boris” in Orange County, San Diego Opera chose traditional staging (with sets tending towards the minimalist) but with elaborate costumes and pageantry. It also added an intermission, dividing the opera so that the first part contained two introductory scenes about Boris’ accession to power, followed by two focusing on Grigori/The False Dmitri. After the intermission, all three scenes centered on Boris’ declining mental state and ultimate death.

A Boris of the first rank obviously can create a theatrical tour de force in this relatively short version where everything that happens is all about him, and Furlanetto did just that, dominating the five scenes in which he appeared. And, as a treat to the audience, the two scenes in which Boris does not appear were themselves populated by world class artists.

Furlanetto, holding orb and sceptre as the coronation bells sounded, was an imposing tsar. He possesses the vocally secure, rich bass voice that has seemed so appropriate for the part since the days of Fyodor Chaliapin.

But his post-intermission scenes gave the audience a taste of a master artist at work. His blessing to his widowed daughter Xenia (Inna Dukach) exuded genuine feeling. His alarm at the rumors of the resurrected Dmitri led to his physical collapse from overwrought emotion (observed by Allan Glassman’s treacherous Prince Shiusky).

His encounter at St Basil’s Church, showed his superstitious terror at being called Tsar Herod by the Simpleton, played sympathetically by Doug Jones. His instructions to the Tsarevich Feodor (Lisa Agazzi) and death scene demonstrated Furlanetto’s full command of all of the emotional range of this greatest of Russian operatic roles.

[Below: Varlaam (Mikhail Svetlov), fills cup of Missail (Joseph Frank), with Grigori, the False Dimitri (Jay Hunter Morris) and the Hostess of the Inn (Judith Cristin) in background.  Edited image, based on a photograph courtesy of San Diego Opera.] 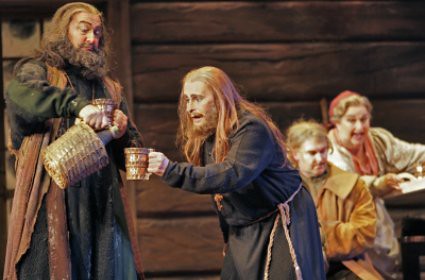 The Varlaam, Russia’s Mikhail Svetlov, was an astonishing performer. We know the role of Boris is one he performs, and one wishes the opportunity to see him also as the Tsar. One also must give special citation to the performances of Vitalij Kowaljow the Pimen and Jay Hunter Morris, in the role of Dimitri.

Among the comprimario artists that also deserve praise are the amusing Border Guard played by Louis Lebherz and Judith Christin’s Innkeeper. (Obviously, General Director Campbell was sufficiently desirous of obtaining Ms Christin that he acceded to her apparently non-negotiable demand to extract the Hostess’ duck-plucking song from the 1872 version to give her a solo aria missing in the 1869 score.)

A person who has gone to many performances of “Boris”, but not one based on the 1869 score will detect a somewhat different “sound”. Richard Taruskin, the University of California, Berkeley professor whose writings on the history of Russian opera are an invaluable source of information, has described the processes by which the libretto of the 1869 version was created.

In effect, it exists as Mussorgsky’s abridgement of an Alexsandr Pushkin play, made into opera, following a process, Taruskin points out, that Claude Debussy, Richard Strauss, and Alban Berg later used for libretti that created operas from texts of, respectively, Maurice Maeterlinck’s “Pelleas et Melisande”, Oscar Wilde’s “Salome” and Georg Buechner’s “Woyzeck”. We should think of the 1869 version as following a strict “Pushkin set to music” formula that creates a distinct style.

Once he decided to make some concessions to enable its production for performance (addition of the Lithuanian scenes to create a prominent female role), Mussorgsky decided to redo whole parts of the score, and the revised portions abandoned the concept of setting Pushkin to music.

He also refocused the plot, eliminating much of Pimen’s exposition of the Tsar’s alleged misdeeds, and with other important excisions (the simpleton’s encounter with Boris and all of the crowd scenes that constituted the episode at the Saint Basil church.)

The choruses, a central character in all versions of the opera, were well coached by Stage Director Lotfi Mansouri and Chorus Master Timothy Todd Simmons and sang magnificently, appearing at various times as oppressed masses, holy pilgrims carrying icons and candles, boyars debating the Tsar’s and Pretender’s fate, and representatives of all the Russian classes present at the Tsar’s coronation. The Russian (St Petersburg)-born conductor, Valery Ryvkin, who often works with Gergiev, kept all of the elements in this complex fusion of chorus, solo artists and orchestra in proper balance. 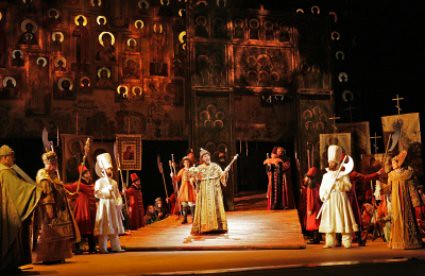 The scenery is credited as being provided by the Seattle Opera, including elements designed by Robert Dahlstrom for that institution, with other elements from a production created for the Canadian Opera Company by Wolfram Skalicki. One feature was interesting – a scenery drop filled with gold-encrusted icons of saints that appeared prominently in the Coronation Scene and Kremlin Palace Scenes and in the background for the Tsar’s apartments.

It was the bejeweled costumes of the nobility and royalty that provided the spectacle usually associated with this opera. Even so, the simple sets, which included log-plank boardwalks to the churches and the Kremlin Square, evoked a more primitive late 16th century Moscow.

The San Diego and Los Angeles opera companies have both secured Furlanetto’s powerful artistry in recent years. He appeared at San Francisco Opera in two of the last three seasons of the Adler era (1979 and 1981) and sang the role of Alvise six times in Ponchielli’s “La Gioconda” (with Renata Scotto and Luciano Pavarotti, telecast on PBS). In 1981 he sang three performances of Don Diegue in Massenet’s “Le Cid”, six performances of Raimondo in Donizetti’s “Lucia di Lammermoor” and two performances of Ramfis in Verdi’s “Aida” in 1981. (Additionally, I saw him perform in the San Diego mounting of Verdi’s oldest surviving opera, “Oberto” in 1985.)

When I first started attending opera, the S. F. Opera management ultimately controlled the opera seen in Southern California, choosing what performances would be shown and what artists would come. Now there are three opera companies in Southern California, which produce operas and productions not seen in San Francisco with first rank international stars who do not appear regularly (if at all) at the venerable Northern California company.

San Diego Opera has in recent years adopted an annual January through May season which neatly complements the San Francisco Opera’s September through December and June seasons. Although sometimes an opera is duplicated between the two companies, a subscriber to both can see 14 or 15 different operas a year, each with worthy casts.

(The only 2007 duplication between the companies is Saint-Saens’ “Samson et Dalila”, both with Clifton Forbis as Samson and in the same production, though Denyce Graves is San Diego’s Dalila and Olga Borodina is San Francisco’s. In their 2007-08 seasons, the only conflict announced is Wagner’s “Tannhauser”, but with different productions and casts.)

With Campbell leading the San Diego company, Placido Domingo the Los Angeles Opera and David Gockley that of San Francisco’s, there is a great potential for a new “Golden Age” of operatic production and performance to occur right here in California.