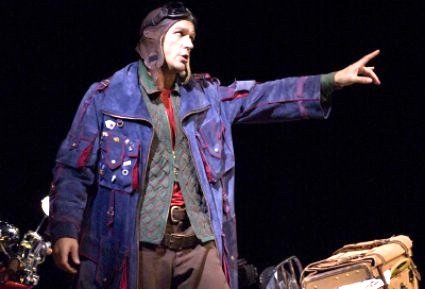 Previously, this website has suggested that, as the footprints of former San Francisco Opera General Director Pamela Rosenberg are washed away over time, the only souvenir of her controversial stewardship may be the world’s largest production of Rossini’s “Barbiere di Siviglia” ever conceived.  Would that this souvenir never existed, and that some spectacular souvenir productions from the great era of San Francisco Opera General Director Kurt Herbert Adler and somewhat lesser era of Terrence McEwen had not “gone missing” during Rosenberg’s time at the helm.

[Below: Count Almaviva (John Osborn, below left), sings his cavatina to Rosina (Allyson McHardy), in upper story window, as Figaro (Nathan Gunn, below right), looks on; edited image, based on Terrence McCarthy photograph, courtesy of the San Francisco Opera.] 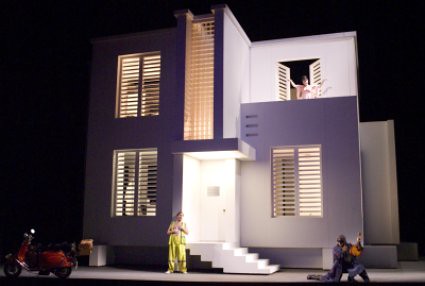 A souvenir of a person can be quite different from that person’s legacy, and I suspect that the legacies of general directors are never based on which physical productions of operas that existed at the beginning of their tenure no longer were in the possession of the company at their tenure’s end.  This review of the San Francisco “Barber” in its 2006 edition is not the place to discuss the subject of what San Francisco Opera still owns that they used to own, but it is a subject to which this website will return.

The first words of “Barbiere” are sung by Almaviva’s henchman, Fiorello.

[Below: Eugene Brancoveanu as Fiorello; edited image, based on a Terrence McCarthy photograph, courtesy of San Francisco Opera.] 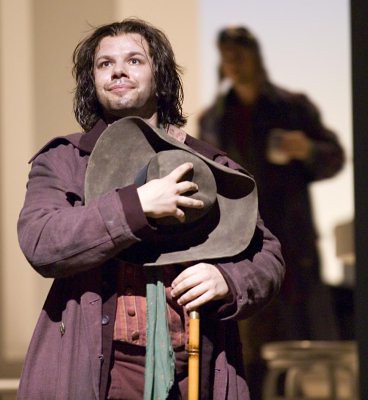 And now, back to “Barber”

[Below left: Nathan Gunn (Figaro), atop a Vespa; edited image, based on Terrence McCarthy photograph, courtesy of San Francisco Opera.] 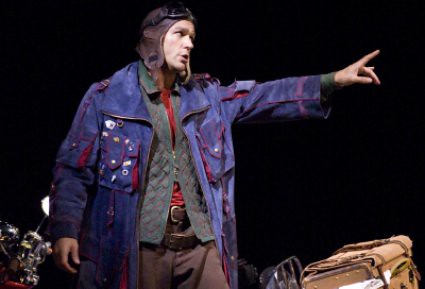 For the 2006 production, conducted by Maurizio Barbacini, there were four principals (of more or less importance) who repeated their roles in the original production in October 2003, three of whom have been part of all performances, including the “second cast” of January 2004. Those four were the Figaro (Nathan Gunn) who was replaced by Thomas Hampson for the five January performances (the reasons of which are a story in itself recited elsewhere in this website), Phillip Ens (Don Basilio), Catherine Cook (Berta) and Ricardo Herrera (Ambrogio). 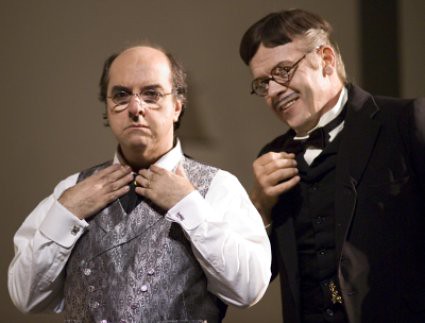 A successful “Barber” depends as much as anything on the performances of the two pompous buffo roles, Don Basilio and Doctor Bartolo. Here the S. F. Opera production was on high ground. The Basilio in every one of this production’s performances to date has been Phillip Ens, who also performed Claggart in S. F. in Britten’s “Billy Budd” in 2004. These are two sinister characters (although Claggart, by not appearing preposterous, seems infinitely more dangerous.) One of the performers at Stuttgart Opera that Rosenberg successfully introduced to San Francisco (Claudia Mahnke and Catherine Naglestad would also be in this list), Ens is an extraordinary singer and actor.

Ralph de Simone I had first seen this year as Taddeo in a performance of Rossini’s “L’Italiana di Siviglia” at the Kennedy Center in Washington D. C. He is high on the short international list of experts in these buffo roles, with their elaborate, tongue-twisting “patter songs” and their required skill in comedic performance.

Herrera, who after all was Taddeo for both Olga Borodina and Vivica Genaux in San Francisco’s 2005 mounting of Rossini’s “L’Italiana in Algeri”, as an Adler Fellow fills in where needed (I would suspect covering de Simone’s Bartolo). The stage director likely pleaded that he be encouraged to continue to perform all of the fussy stage business of the Ambrogio part in this atypical “Barber” production.

However, Herrera’s career path surely requires him to drop the Ambrogio assignment forever at the conclusion of his obligations to this revival. There are too few very funny first rate buffo singers internationally to meet the worldwide demands for “Barber” and the other Rossini and Donizetti buffo operas. One of the Bay Area’s excellent actors could do this part should this production be revived in San Francisco again.

Herrera’s fellow servant (and, in this production, strip poker mate), Berta, played with insouciance by Catherine Keen, at least is a singing part with a solo aria, and is therefore a role that a grateful company can bestow on a valued comprimaria.

[Below: John Osborn as Count Almaviva; edited image, based on Terrence McCarthy photograph, courtesy of the San Francisco Opera.] 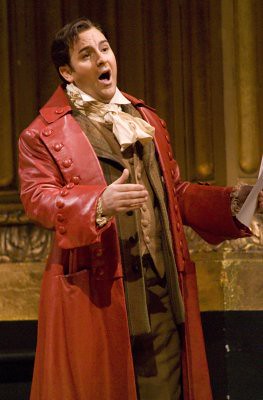 Obviously, “Barber” is a true ensemble opera, but there are three roles with “first among equals” status. The loving couple, Count Almaviva (John Osborn in his company debut) and Rosina, by the end of the opera the Countess Almaviva-elect (Allyson McHardy), left differing impressions. Although Osborn did not display a giant voice, he was an attractive coloratura tenor with some true flexibility in his vocal delivery (even showing evidence of that rare commodity, a tenor trill).

Unfortunately, the stage director (I assume all the stage business originated with Johannes Schaaf, although all performances after 2003 are attributed to Director Ray Rallo) cared very little for the fact that, even though Almaviva was masquerading as a poor student, he was still a very rich and powerful count and the employer of Fiorello, the leader of a ruffian orchestra. Even so, the stage directions had the orchestra rob the count and steal his clothes, leaving him bare-chested, wearing only long-john underwear bottoms.

San Francisco retains a reputation as a major international company, so an up and coming star like Osborn will apparently submit himself to a non-textual onstage assault of the character he is playing so as to list a valuable credit on his resume. However, I wonder what the reaction of my first Almaviva, the great leggiero tenor Cesare Valletti, would have been if a stage director of the kind that Rosenberg hired would have asked him to subject himself to this stage business. 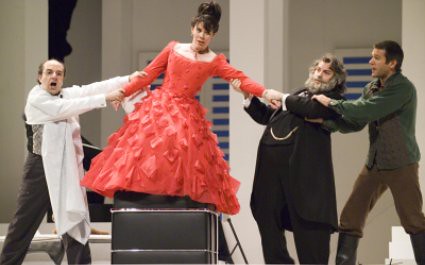 However, the Almaviva got off lightly. The stage directions for the Rosina were ever more ludicrous. She was forced to carry around a stuffed kangaroo, and at various points would be forced to cower or pout. This is the character who sings in “Una voce poco fa” that she has a “viper’s sting” if crossed. But even in this important aria other stage business crowds in on her message. Brancoveanu’s Fiorello silently mouths the aria’s first words, and Nathan Gunn’s Figaro distracts us as he delivers some substance in a package to the maid Berta. (So Figaro deals drugs as well as cuts hair and arranges assignations.) One is left with the impression that Count Almaviva is consuming a lot of time and fortune in the pursuit of marrying a dumbbell.

Having seen Thomas Hampson’s larger than life Figaro in the “second cast” performances in January 2004, I was a bit disappointed that Gunn’s performance as Figaro was not as riveting as his appearances as Billy Budd (the title role in Britten’s opera) and as Guglielmo in Mozart’s “Cosi fan Tutte”. I am quite prepared to blame the stage director(s) for this.

Of course, he was memorable, as was Hampson, on the Vespa, delivering the first notes of “Largo al Factotum” as he circles the stage three times, while sharing his Vespa with a passenger. He shaves the passenger, then the passenger’s legs, until it is revealed that the rider is a comely woman.

With Europe still atwitter over unorthodox productions of standard repertoire operas, and Schaaf’s and Schaal’s reputations there still in their ascendancy, this might be a good time to sell the production. It has enough virtues and interest that it is likely that someone else would wish to own it and enough detriments (including that it is a peculiar reading of the piece that has been already been seen in San Francisco 24 times) that this might be an opportune time to be disentangled from it. Perhaps it can be offered for sale in whatever is the opera production equivalent of E-Bay. (Maybe Italy’s Piaggio & Company can help subsidize the purchase because of the prominent product placement it gives its fading Vespa brand.)

“Barber” is the most popular of the less than half-dozen operas buffa from early 19th century Italy – three by Rossini and a couple by Donizetti – that have established themselves in the standard opera repertoire. By accepting the original set-up of what in each case is a series of very funny gags imaginatively incorporated into memorable melodic lines, one’s appreciation for each opera is enhanced. By diluting the presentation of the imagination of Rossini and his librettist, we deprive opera audiences of the full realization of the genius that is in these works.

The concept of a “multi-dimensional” house on a revolving turntable for the succession of “Barber” scenes does provide opportunities for some high jinks that would be difficult in a traditional stage set, but a “right-sized” house representing a once upon a time period of Seville would complement the stage action envisioned by the very funny creator of this opera. A giant white Bauhaus detracts from it.

Seeing the Vespa scenes repetitively is like witnessing the delivery of the punch-line to a joke delivered two dozen times. For those in the audience who come to see the Vespa riding, I would recommend that they take part in the annual July Evel Knievel weekend in Butte, Montana, which I can testify provides much more impressive showmanship.

Should the opera company decide that it can squeeze one more revival of this flawed production, then I would hope that many of the stage ideas be scrapped and a talented director be empowered to revise the stage direction as appropriate. I would not, however, empower him to keep the distracting public works sideshow at the extreme stage right.