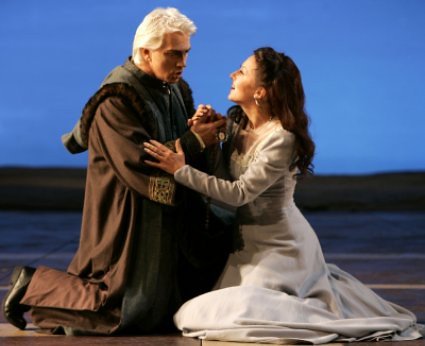 Those who lament the current day’s supposed absence of large Verdian voices would be encouraged by the Houston Grand Opera’s 2006 mounting of the Royal Opera’s production of Verdi’s “Simon Boccanegra”. Those who hope that new San Francisco Opera Director David Gockley will be able to restore the tradition of presenting large Verdian voices in San Francisco’s War Memorial Opera House should be especially heartened, as this was a production planned when Gockley was at Houston’s helm.

And those who look forward to Summers’ return to San Francisco in June to conduct Gluck’s “Iphigenie en Tauride” and increasing cooperation between the Houston and San Francisco companies, would likely be pleased with Summers’ manifest success in conducting his first ever performances of “Simon Boccanegra”.

I had never attended a performance in Houston, but a confluence of events made it seem a “must-do”. I strongly believe that the San Francisco Opera has been in a rough patch for several years (other pages on this website defend this proposition), but that the choice of the General Director from the Houston Grand Opera appears to be an effective remedy for reversing the situation.

I also have a personal relationship with Verdi’s “Simon”. It was the first Italian opera I ever attended (with Leonard Warren, Renata Tebaldi and Boris Christoff) 50 years ago last month. Sometime around the 50th anniversary of the first performance of every opera I saw in the 1950s and 1960s, it is my intention to travel to wherever I need to (within reason) to attend a performance of that same opera. 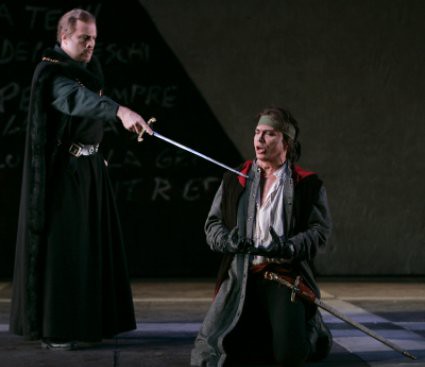 The intermixture of Hvorostovsky (whom I had seen several times in San Francisco appearances) singing Simon for the first time, Summers conducting the opera for the first time, and the cast that Gockley signed, all appeared to argue for a trip to the sombre George Brown Theatre in Downtown Houston’s Wortham Center.

Houston chose the Covent Garden production that Elijah Moshinsky developed for London’s principal opera house in 1991. The sets, designed by Michael Yeargan, have played in London in four different seasons and were shown in San Francisco in 2001. The “Simon” sets predate Yeargan’s S. F. Opera debut as set designer for 1993’s production of Bellini’s “I Puritani”. Moshinsky did not supervise the production’s San Francisco mounting (that task fell to the Royal Opera’s David Edwards), but he took charge of its current reprise in Houston. 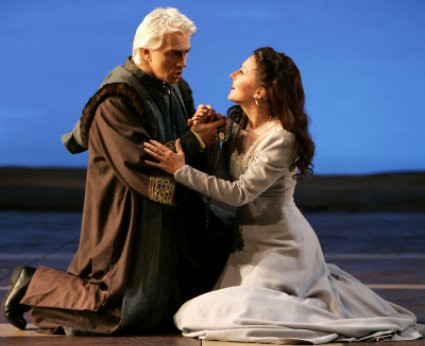 At a time when his former Kirov Opera colleague Anna Netrebko has emerged as a super-star diva in such roles as Massenet’s “Manon”, Siberian-born Dmitri Hvorostovsky, one of the small number of baritones in operatic history to achieve matinee idol status, chose Houston as the venue for his first attempt at bringing to life the challenging role of Simon.

The role is a luscious one, attracting most of the world’s great Verdi baritones over the past 125 years. As a bonus for Verdi lovers, the opera contains four other significant roles for Verdian singers.

In addition to Hvorostovsky’s role debut, two Houston debuts of artists not seen at S. F. Opera were noteworthy – the Maria Amelia of Olga Guryakova and Gabriele Adorno of Marco Berti. Also present in the cast were two artists that took part in the Covent Garden’s production’s 2001 visit to San Francisco – Raymond Aceto and Patrick Carfizzi, respectively Houston’s Fiesco and Paolo.

When presented a half-decade ago, S. F. Opera General Director Lotfi Mansouri mounted the opera for Paolo Gavanelli as Simon, a role covered by Nikolai Putlilin (Kirov’s 2006 Boris Godounov in Costa Mesa), who had been the artist performing the important character role of Paolo. Since Putilin was covering Gavanelli, another artist was designated to cover Putilin – and that artist was Carfizzi. Meanwhile, Aceto was apparently covering that production’s Fiesco, Samuel Ramey, while at the same time being regularly scheduled in the comprimario part of Paolo’s co-conspirator, Pietro.

As it happened, Gavanelli was indisposed for a Sunday matinee performance (that I attended) and Putilin assumed the Doge’s cap as Boccanegra and Carfizzi got a chance to play Paolo on the War Memorial Opera House stage. Ramey stayed in good health for all performances. This year, Aceto was cast from the beginning as Houston’s Fiesco and Carfizzi as its Paolo. 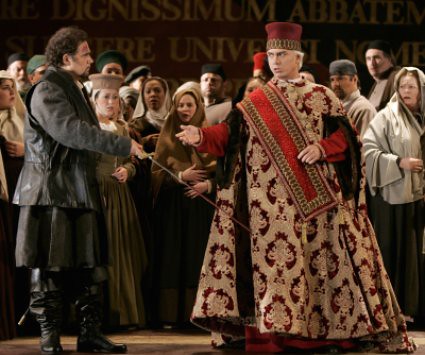 Hvorostovsky, whom one does not first think of when listing the great contemporary Verdi baritones, took one of the most demanding of these parts (and one that lacks a big aria for the title character) and made it interesting, both vocally and dramatically.

Although in past years, he had seemed to have a lighter baritone than might be required for Boccanegra, his voice was rich and mellifluous throughout the part’s range.

The Doge’s costume with its hair-covering cap is less flattering to him, but conveys authority as he leads the great ensemble in the Council scene. In the post-intermission last act, Hvorostovsky effectively projects an old and sick man (soon to be further tormented by being poisoned) who drags himself about on two canes. His Russian colleague, Guryakova, not yet as well-known to American audiences, proved to be a superb Amelia, full-voiced, secure in her difficult opening aria, resplendent in the all important vocal line that soars in the Council Scene’s great ensemble. 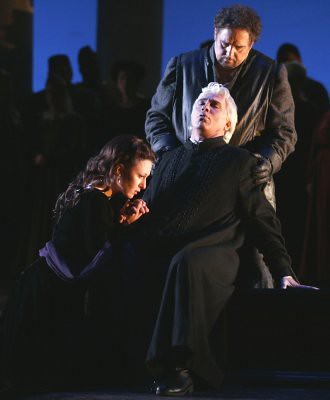 Opera managements (including San Francisco’s) have tended to undercast the tenor role, possibly to afford having a world class bass cast in the role of Fiesco. (Performances I have attended have included the Fiescos of Boris Christoff, Giorgio Tozzi, Martti Talvela, Cesare Siepi and Samuel Ramey.)

But Houston chose to contract with the rising young Italian tenor, Marco Berti (who next will debut in San Francisco as Don Jose in Bizet’s “Carmen” and will then return to Houston in April as Rhadames in a new Zandra Rhodes production of Verdi’s “Aida”, expected to be the hottest opera ticket in Texas).

Having Berti’s full-voiced Adorno juxtaposed with Aceto’s competently sung Fiesco balances the two roles, who share important scenes and one of Verdi’s most beautiful male duets. And, having three great Verdi voices – Guryakova, Berti and Hvorostovsky – taking part in the final act trio is a fulfilling experience, one that easily refutes the sometimes-heard criticism that all that happens in the opera after the Council Scene is anticlimactic.

The unit set represents a familiar Yeargan style, with the illusion of double rows of Doric columns stage right and a patterned tile floor forming the opera’s final scene. For most of the earlier scenes, a white wall divides the stage front from the back center stage. A window in the wall high stage left is prominent in the prologue’s setting of the Fieschi’s mansion, as is a high, dark door at stage left ornamented in the pre-Renaissance style.

At different times the wall is either defaced with written epithets and sloganeering (as in the Prologue set in the period of a Doge’s election, or in the early second Act, set in the conspiracy-ridden latter part of the Doge’s reign) or the wall is embellished with Latin writings in gold-embossed medieval scripts (prominent in the Council Scene).

How does the Houston “Simon” rank with others I have seen over the past half-century? Very high, although I cannot testify to seeing a truly disappointing performance in the seven productions in four cities (Los Angeles, San Francisco, San Diego and Houston) that I have experienced. The Boccanegras were Leonard Warren (SF in LA 1956), Tito Gobbi (SF 1960), Ingvar Wixell (SF 1975), Renato Bruson (SF 1980), Sherrill Milnes (SD 1984), Nikolai Putilin (2001) and Hvorostovsky. I regret Paolo Gavanelli’s indisposition in 2001, but found Putilin to be a likable substitution. I would like to see both of them, and Hvorostovsky (Houston 2006) also, performing the role again.

Obviously, as a teen-age Tebaldiano, my favorite among the Maria Amelias I have seen is Renata Tebaldi (SF in LA 1956), whose role debut was that year at the San Francisco Opera. She was supposed to repeat the part there in 1960, but illness forced her to cancel the season and, disappointingly, Lucine Amara replaced her. I liked Dame Kiri Te Kanawa (SF 1975) in the part, as well as Margaret Price (SF 1980) and Martina Arroyo (SD 1984). It did not seem quite the right role for Carol Vaness (SF 2001), but Guryakova (Houston 2006) was wonderful.

The Gabriele Adornos were far less successful. Turrini (SF in LA 1956) had no business in a cast with Tebaldi, Warren and Christoff. Of the others I saw before Berti (Houston 2006), Giuseppe Zampieri (SF 1960) is the tenor I rank highest, although I much prefer several others – Giorgio Merighi (SF 1975), Giorgio Lamberti (SF 1980) and Carlo Ventre (SF 2001) – to the likes of some of the tenors S. F. has had more recently. Adriaan Van Limpt was the San Diego Adorno.

The Fiescos, as I mentioned above, were among the most famous bassos of the past half-century. San Francisco Opera has always done what it takes to get the very best for this role, and to support that statement, I offer the complete list of Fiesco’s 1956-2001: Boris Christoff (SF, SF in LA 1956), Giorgio Tozzi (SF 1960), Martti Talvela (SF 1975), Cesare Siepi (SF 1980) and Samuel Ramey (his role debut, SF 2001). Although I saw San Diego’s Fiesco, Nicolai Ghiuselev, in several roles in San Francisco, I would not place him in the same rank as the San Francisco quintet of Fiescos.

Important character actors take the part of Paolo, including Heinz Blankenburg (SF in LA 1956), Allan Monk (SF 1975) and Frederick Burchinal (SF 1980). Carlos Chausson (SD 1984), who now appears regularly at the Zurich Opera, used to do these roles in San Diego. However, hands down the most vivid performance of Paolo I ever seen was that of Sir Geraint Evans (SF 1960). I can still conjure of the image of his shrinking in horror as the formidable Tito Gobbi demanded that he curse the person (Paolo himself) leading the conspiracy against him.

I understand the economics of the unit sets, and how useful they are for managements (such as Gockley in first Houston, and now S. F.) that prefer to combine the acts of most operas in performance, so as to have a single intermission whenever feasible. However, for “Simon”, I truly liked the imposing and stage-filling sets and costumes of Pier Luigi Pizzi for the Chicago Lyric Opera, borrowed by San Francisco in 1975 and 1980, where the Grand Council scene was sufficiently majestic to suggest that the Ligurian city-state was truly a Mediterranean power.

For my comments on my first performance of this opera, which includes additional information on its early history at the San Francisco Opera, see: Simon Boccanegra – October 20, 1956