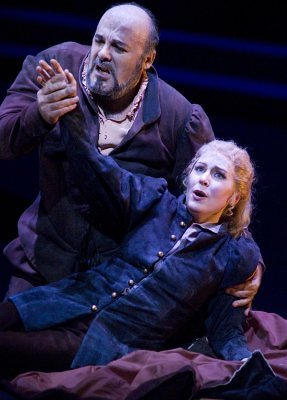 Having attended the Mariinsky Theatre’s “Kirov Ring” at the Orange County Performing Arts Center October 6 through 11, 2006 (see my reviews elsewhere on this website), I wondered what would be the impact of a United States opera company adopting the Gergiev/Mariinsky approach to casting. In the Kirov Ring, conductor and intendant Valery Gergiev cast voices who sing (or have the capability to sing) principal roles in the Mariinsky theatre in small roles as well as big roles, instead of the traditional approach of casting large voices in the principal parts and smaller voices in the comprimario parts. Less than a week later, I was able to see what the impact on an operatic performance would be if this was done. The performance was San Francisco Opera’s presentation of Verdi’s “Rigoletto”. 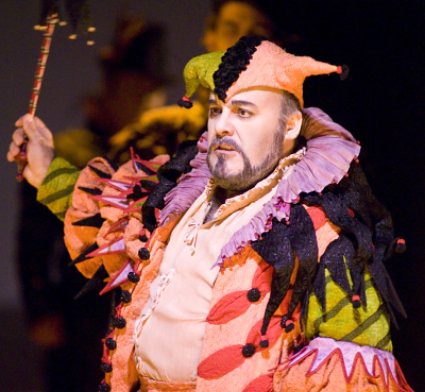 Giant-voiced Paolo Gavanelli, the most lustrous Italian baritone of his generation, returned to San Francisco Opera to reprise his interpretation of the opera’s title role, which he performed here in 1997 with Ruth Ann Swenson when the Michael Yeargan production debuted. The Duke of Mantua role was shared by Richard Leech and Tito Beltran (the latter of whom I saw). This time, Gavanelli was joined by an extraordinary Gilda (Mary Dunleavy) and, with one exception, the deepest casting of “Rigoletto” in the company’s history.

Albanian tenor Giuseppe Gipali, who had the glamour role of the Duke of Mantua, was out of his league from the very first scene, with a pleasant but under-sized voice that was immediately outshone by a quintet of Adler fellows cast in the comprimario parts. Nor did the situation improve for him during the rest of the performance, with a Sparafucile and even a maid Giovanna who sounded like they were amplified (which they were not), while Gipali shounded like he was singing from offstage. Gipali should be wary of signing any further contracts to sing in the War Memorial Opera House.

In most productions, the first scene is filled with characters, but only the Duke and Rigoletto and an occasional Monterone are typically remembered – the rest might as well be cardbord cutouts (almost always with little voices). In this production, the Marullo, the Borsa and the Cepranos were sung and acted by artists that one would be delighted to hear in principal roles at the War Memorial as soon as they can be engaged. (Hopefully, some of them are covering smaller-voiced artists who have contracts left over from the Rosenberg days.)

As expected, Eugene Brancoveanu’s Marullo continued his unbroken streak of impressive performances, but also notable were his colleagues – Adlerians Matthew O’Neill (Borsa), Jeremy Galyon (Count Ceprano) and Kimwana Doner (Countess Ceprano). The Monterone was Greer Grimsley, who has sung Scarpia at the S. F. Opera and does the Wotan roles in Seattle’s conceptualization of Wagner’s “Der Ring des Nibelungen”.  Grimsley was a presentable Monterone. 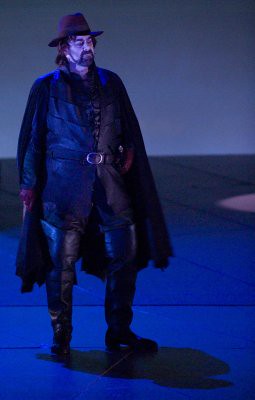 Another Adler fellow, Kendall Gladen, was nicely cast as the venal maid, Giovanna, with acting talents that matched her attractive voice. Kristinn Sigmundsson, who had played Mephistopheles in S. F. Opera’s 2003 staging of Berlioz’ “Damnation of Faust” was a sonorous Sparafucile – opera’s most likable murderer-for-hire. He is alternating Sparafucile with the role of King Marke in Wagner’s “Tristan und Isolde”. One should be pleased that he is engaged to be Ochs and the Commendatore respectively in next Summer’s S. F. Opera performances of Richard Strauss’ “Der Rosenkavalier” and Mozart’s “Don Giovanni”.

But this extraordinary team, guided by the debut conducting of Stephen Lord, a David Gockley colleague at Houston Grand Opera, was dominated by Gavanelli’s astonishing performance. San Francisco has had most of the first rank Italian baritones of the past half-century – Tito Gobbi, Giuseppe Taddei, Ettore Bastianini, Renato Bruson, Piero Cappuccilli, Leo Nucci and Matteo Manuguerra (each of whom I have seen in multiple roles). Gavanelli, whom I saw in San Francisco as Carlo Gerard in Giordano’s “Andrea Chenier” in 1992, as the Conte di Luna in Verdi’s “Il Trovatore” in 1994, as Rigoletto in 1997, and in the title role of Verdi’s “Nabucco” in 1999 holds his own in this distinguished group. Regrettably, he was ill for the performance of the title role in Verdi’s “Simon Boccanegra” that I attended in 2001, although the audience’s consolation was a performance of Boccanegra by the Kirov’s Nikolai Putilin (see Tom’s review, elsewhere on this website, of Putilin in the title role of Mussorgsky’s “Boris Godounov” in the Kirov/Mariinsky production in Orange County.)

Remarkably, in the past 40 years at the S. F. Opera, Gavanelli is the only Italian-born artist to sing the role of Rigoletto (Manuguerra having been born in Tunis). Of the first performance I attended of an S. F. Opera main company presentation of “Rigoletto”, Britain’s Peter Glossop was Rigoletto, with the very successful pairing of Alfredo Kraus and Reri Grist in the two other principal roles, in one of the ancient Armando Agnini productions. Seven years later, the spectacular new production of “Rigoletto” by Jean-Pierre Ponnelle starred American Sherill Milnes, with Giacomo Aragall and Izabella Nawe. (I saw the production’s debut performance, before Adler requested Ponnelle to tone down the obviously sexual hip-thrusting he required of the choristers and comprimario artists in accompaniment to Aragall’s “Questa o quella”.) That production was revived in 1981 with Manuguerra, supported by Peter Dvorsky and Patricia Wise (David Gockley’s first wife), in 1984 by Sweden’s Ingvar Wixell, with Dano Raffanti and Luciana Serra, and in 1990 with Alain Fondary, with Leech and Swenson.

The Ponnelle production became a casualty of the regime of General Director Lotfi Mansouri, who appeared uninterested in preserving the whole catologue of Ponnelle productions created when Kurt Herbert Adler was in charge. Having seen Ponnelle’s dynamically clever conception with each of the talented casts listed above, I found Mansouri’s decision to replace the Ponnelle “Rigoletto” (especially in the same year that he eliminated Ponnelle’s extraordinary production of Wagner’s “Flying Dutchman”) as infuriating. 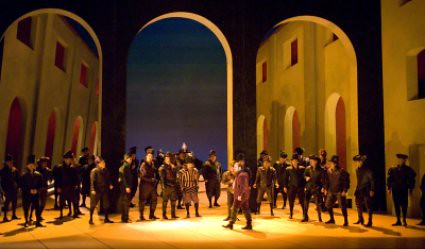 In 1997, Gavanelli was chosen to introduce the Michael Yeargan “Rigoletto”, with Swenson (who had seemed so at home in the elaborate “bird-cage” setting that Ponnelle conceptualized for Rigoletto’s House) a captive in the most unglamorous Act II Scene II imaginable. Yeargan presents a stark, deep red space, furnished only by a cubical object in the middle of a bottom floor, with a staircase to an upper room. The staircase has an austere metal railing that brings to mind the concrete internal fire escape stairs in a hotel or office building.

[Below: Sparafucile (Kristinn Sigmundsson) and Maddalena (Kathleen Rohrer) discuss how and whether to murder the Duke, in a space similar to that of Gilda’ apartments; edited image, based on a Terrence McCarthy photograph, courtesy of the San Francisco Opera.] 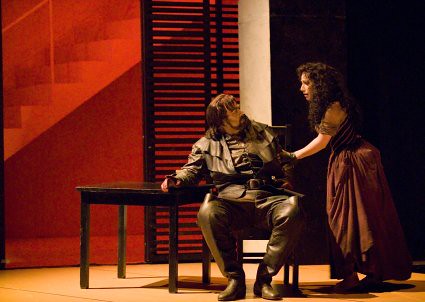 However, having had nine years to fume about Mansouri’s destruction of the Ponnelle “Rigoletto” and “Dutchman” productions, and having had nice things to say about other work by Yeargan (see my review of his S. F. “Butterfly” production), it seems appropriate to evaluate the other features of his “Rigoletto” sets.

Yeargan was influenced by the distorted perspectives in the pre-World War I city landscapes, created by Greek-born artist Giorgio di Chirico, who himself influenced Salvador Dali and other surrealists. Yeargan’s production is basically a single set, with an auxiliary space on a moving contrivance at stage left that doubles as Rigoletto’s house and Sparafucile’s inn and is wheeled back and forth as needed. Both stage right and stage left have four Roman arched alcoves, which are an homage to the arches in di Chirico’s 1914 painting “The Mystery and Melancholy of a Street.”

[Below: Rigoletto (Paolo Gavanelli); edited image, based on a Terrence McCarthy photograph, courtesy of the  San Francisco Opera.]

In the first scene, the front stage is dominated by three arches, lit (with red colors dominating) in such a way that the di Chirico-like city street becomes an interior space. In the first encounter with Sparafucile, the same space is darkened in tones of green and becomes an exterior scene, then serves as the streets and alley ways outside of Rigoletto’s house, when the jester is tricked into abetting Gilda’s kidnapping.

To create an interior room in the Duke’s palace, the front arches are eliminated. All of the courtiers are frozen in place as Gavanelli wanders among them, displaying Rigoletto’s emotions that range from fear to anger to despondency. Then Gilda escapes the Duke’s clutches (in the Ponnelle production a poster bed is in center stage behind whose canopies the rape occurs). As Gavanelli’s Rigoletto begins to understand the grotesqueness of the Duke’s crime, Dunleavy’s Gilda becomes visibly shaken by the savagery of the vengeance to which her father is committed. Rarely has this dialogue between Rigoletto and Gilda been so convincingly presented, setting up a final scene of unsurpassed dramatic tension. 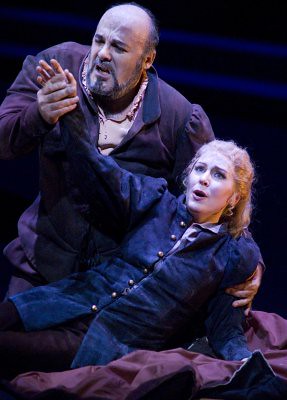 The imbalance in vocal power between the lead tenor and the rest of the cast led to a curiosity in the great quartet of that final scene. The Maddalena, Katherine Rohrer, stage left with Gipali, politely tailored her voice so as not to drown him out, whereas Gavanelli and Dunleavy were unsparing in their vocal prowess in stage center. In the quartet, of course, it is the Duke and Maddalena that each have the melodies that give the quartet its particular distinctiveness, and Rigoletto and Gilda, that have vocal lines that intersperse and harmonize with the other pair. In this quartet one really became aware of what Gilda and Rigoletto actually sing in the quartet, because it was their voices that soared above the others.

Of the three operas performed so far in in the Fall, 2006, two (“Fledermaus” and “Rigoletto”) were not originally scheduled. Apparently, Dunleavy and Gipali (and perhaps Sigmundsson, although he might have been engaged only as King Marke) were to be in a production of Donizetti’s “Lucia di Lammermoor” that Gockley assessed would be dismissed as Euro-trash by the San Francisco audiences, who have developed severe allergic reactions to weird reading of standard repertory operas. When the superb Gavanelli proved to be available for six performances, and with a relatively safe and intact Yeargan production owned by S. F. Opera, Gockley substituted “Rigoletto” with spectacular results. To my mind, the casts of “Fledermaus” and “Rigoletto” (Gipali, of course, excepted), ranked at the top of the last half century of performances of these operas.

For my review of another Yeargan production, see: Puccini, Yeargan and Racette Team for Masterful S. F. Butterfly – June 18, 2006