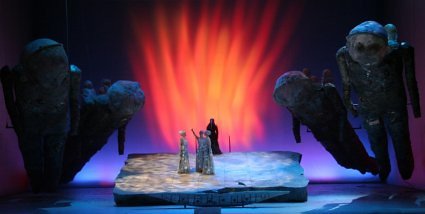 The final opera of the Kirov Opera/Mariinsky Theatre presentation of Wagner’s “Der Ring des Nibelungen” in California’s Orange County commenced in the late afternoon on the fifth day after the Friday evening “Rheingold” that began it all. Valery Gergiev, the Kirov/Mariinsky’s great wonder, again conducted.

As the Three Norns came into view, tending buoys around which were wrapped the rope of fate, the extraordinary stage sets of George Tsypin and lighting of Gleb Filshtinsky were now so familiar that it was as if Wagner is always presented this way.

The Norns were clothed in the mysterious dresses and beaded veils that costume designer Tatiana Noginova associates with the characters who represent the elemental forces in nature. We saw similar ideas in the garments worn by Erda and the Woodbird.

The great beings now are headless, but one is encrusted with a long eel, another a crocodile, a third a sea turtle, a fourth with a fishlike creature. Nine mummy dancers writhe as we all come to realize that the Norns’ long careers as weavers of the world’s fate will soon come to an end with the snagging and breaking of their rope.

Olga Sergeyeva, our Brünnhilde for both “Walküre” on Friday night and “Siegfried” on Sunday, continued her marathon performances with the “Götterdämmerung” Brünnhilde. Viktor Chernomortsev, another “Siegfried” alumnus, was back for his second consecutive Alberich, the part in “Rheingold” having been sung by a colleague.

The only one of the three Ring characters who appears in both “Siegfried” and “Götterdämmerung” that had a cast change was its title character. Viktor Lutsyuk (Grigory on the Gergiev recording of the 1869 version of Mussorgsky’s “Boris Godounov”) replaced Leonid Zakhozhaev, who had been an impressive Siegfried in the opera that bears his name.

Lutsuyk and Sergeyeva were much more tentative lovers than Zakhozhaev and Sergeyeva had been two evenings prior, but warmed up for a big finish before Siegfried left on his Grand Tour (remember at this point he has not yet met a single other person who was born human).

Gergiev led the magnificient Kirov Orchestra in Siegfried’s Rhine Journey. Journey’s end is the Hall of the Gibichungs – filled with little elf-like people, all doing semaphore hand gestures. The Gibichung dress code appeared to be African chic, with brown and white-striped costumes the rage.

With Alberich coaching his slimy offspring, Hagen, and Hagen providing evil counsel to the Gibiches, this was no place for a hero inexperienced in the dark ways of humankind (all of the wisdom that Brünnhilde’s magic had provided did not seem to help him, nor did he get any magic protection from his sword Nothung, still at his side).

The Gibichung Hall, however, turned out to be an excellent place to listen to Wagnerian singing. Andrey Spehov, who had made such a strong impression as Donner the previous Friday, was an extraordinary Gunther. (The headdress that Noginova designed for Gunther came as close to the stereotypical horned helmet as we have seen in recent years.) Valeria Stenkina did justice to the often undercast role of Gutrune.

True malevolence shown through the effective singing of Mikhail Petrenko. He does some mock ventriloquism also, mouthing the treacherous words that Gunther is singing to the hapless Siegfried. As Gunther and Siegfried sing their oath of blood-brotherhood, the walls turn red.

When we return to Brünnhilde’s rock, Brünnhilde, who had to suffer through successive disasters in “Die Walküre”, but whose luck had seemed to turn on being awakened by her hero, now resumes her accumulation of very bad experiences. Her sister Waltraute (in another blockbuster appearance by the great Larisa Diadkova) defies the required shunning of the disgraced Valkyr to bring her terrible news. Then, unexpectedly, what seems to be a villainous spectre shows up in her hiding place to do her violence.

Once the drugged Siegfried has been convinced to seduce Brünnhilde using the magic Tarnhelm to appear in the form of Gunther, we observe that the Tarnhelm itself has changed its shape from what we saw in “Rheingold”. The little figures that inhabit scenes throughout the Kirov Ring now have glowing red eyes. Then a truly aggressive fight ensues between Brünnhilde and her disguised conqueror.

For Act II, green columns hold up a stone pier, on whose top the little creatures have congregated. As Hagen calls Gunther’s vassals to give them the good news of Gunther and Gutrune’s unexpected betrothals respectively to Brünnhilde and Siegfried, his men trot out in close formation each with a stave and a beaded waistband, laughing merrily when they realize that this gloomy place might become the scene for some real fun. 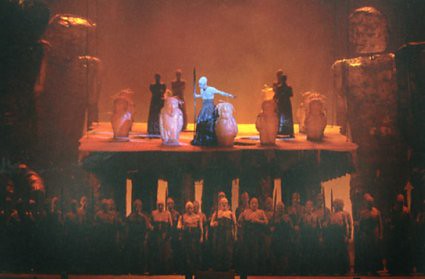 The large figures are back with heads intact. When Siegfried and Gutrune appear, the reaction from Brünnhilde is unexpected and violent, generating the savage swearing of oaths by the hero and the Valkyr. As this ensues, the heads of all four figures are lit.

In the third act, the Rhinemaidens (Margarita Avaverdian returning from “Rheingold”, with Liya Shevtsova and Elena Sommer as newcomers) re-appear with their long green neon hair, and encrustations of sea creatures on their dresses, headgear and pendants. Siegfried, not persuaded to do what he needs to do, blows his horn to signal the hunters as dark purple clouds pass overhead.

[Below: the Rhine Maidens try to tell it like it is to an unimpressed Siegfried; edited image, based on a Chester Higgins, Jr photograph.] 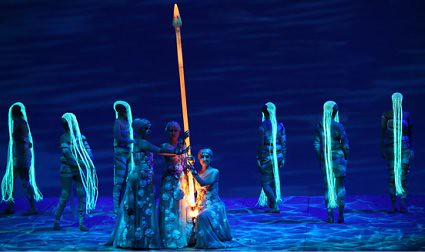 Hagen, Gunther and the hunters arrive for what is not only some of the most gripping music in the “Ring” but in all of opera, as the unwinding of Siegfried’s spell provides Hagen with the opportunity to cut Siegfried down and argue justifiable homicide to an unconvinced hunting party. The red lights glow. Conductor Gergiev achieved a resplendent sound for the Siegfried Death music – one of the principal reasons you have outsized Wagnerian orchestras.

Now the wheel, which we recall from “Siegfried” contained the bear with which the youthful hero was playing, is rolled out to follow the procession of men carrying the fallen hero. Siegfried’s body is laid in a funeral boat with his sword and horn. The heads and hearts of the four large figures glow after Brünnhilde sends the ravens off with the fateful news.

[Below: Siegfried in his funeral boat; edited image, based on Mariinsky Theatre photograph.] 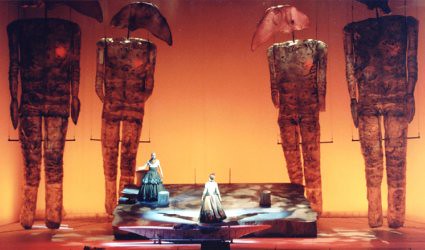 Then the four large figures bend down and the little creatures gather on their backs, with their blue lights glowing. By the time the “O hehrstes Wunder” leitmotiv (magnificently reprising the phrase that Sieglinde sang about the unborn Siegfried in Act III of “Die Walküre”) is heard in the orchestra, the two closest large figures are supine. Sergeyeva’s account of the music preceding Brünnhilde’s self-immolation in the funeral pyre with Siegfried’s body, as expected, was gripping.

[Below: Brünnhilde prepares to ride into Siegfried’s funeral pyre; edited image, based on Mariinsky Theatre photograph.] 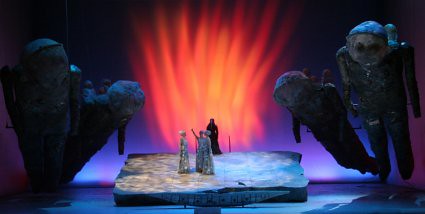 At the end of my reviews of each of the Kirov Ring operas, I have listed those singers I regard as the most interesting in each of the roles that I have seen personally. Except where noted otherwise, all references are to performances by the San Francisco Opera.

The best Waltrautes were Margarita Lilova (1969 and 1972), Helga Dernesch (1985) and the Kirov’s Larisa Diadkova (2006). The notable Gutrunes were Janis Martin (1969) and the Kirov’s Valeria Stenkina (2006). I was fortunate to see the First Norn of Elena Zaremba (1999) and the Second Norn of Helga Dernesch (1985). I have no nominees for any Third Norn or “Götterdämmerung” Rheinmaidens of more than routine interest.

The Kirov Ring was not without detractors. Some complained about Russian singers mis-pronouncing German words. Once in a while one of the orchestra’s brass instruments would miss a note, upsetting those used to the perfection of studio recordings. A few people regarded the sets and costumes as an impossible mish-mash, without an underlying concept. Some people suspected bits of stage business were under-rehearsed.

(A funny episode occurred in during the curtain calls after the “Rheingold” when half of a group of children who had performed admirably as Nibelungen forgot to leave the stage after taking a courtesy bow, as their frantic offstage wranglers desperately tried to get their attention. However, I doubt if anyone’s Ring was spoiled by this episode.)

There was kibitzing (that I regarded as fair) of management’s decision to serve dinner during intermissions to persons who had purchased the dinners days in advance. No last minute deals were available for those who decide on dinner more impulsively. Scheduling 45 minute intermissions between acts (which tended to lengthen beyond the time scheduled) in such long works made for very long nights in the theatre.

But all in all, it was a wonderful experience – this latest presentation of the first Kirov production since Tsarist days of Wagner’s monumental work, and all of California is fortunate to have had it. Although it is hardly appropriate to associate the venerable Mariinsky Theatre with the term “coming of age”, it certainly helped to broaden St Petersburg’s image on the West Coast as a cultural center that one can look to for innovation in presenting operatic material without the destructive approach to tradition that so many associate with European opera companies.

What did come of age is the Orange County Performing Arts Center. Apparently without any major glitches, it succeeded in the phenomenal feat of importing a large orchestra , an entire company of operatic singers, and a full complement of ballet dancers to perform a diverse repertoire of great masterpieces to enthusiastic, sold-out houses.