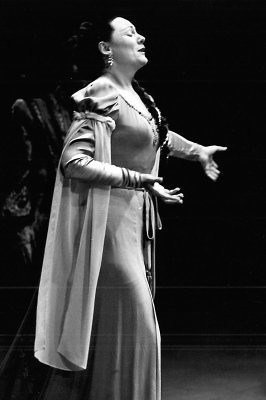 Five decades ago, the San Francisco Opera company would conduct a Southern California tour at the conclusion of its Fall season. The addition of the San Diego to its list of visited cities permitted me to see my first opera, Gounod’s “Faust” in November, 1955 (see my comments for the fiftieth anniversary of that experience elsewhere in this section of the website), and, in subsequent years, my first performances of Puccini’s “Madama Butterfly”, Mozart’s “Cosi Fan Tutte”, and Verdi’s “Aida”, “La Traviata”and “Otello”, highlighting many of the international opera stars of the 1950s.

However, by the time of my first performances, I was hooked on the recordings of opera stars not scheduled for San Diego, especially the beautiful creamy soprano voice of Renata Tebaldi and the sonorous basso Boris Christoff, and on opera composers (read, Richard Wagner), whose works were not then performed in my home metropolis in the Southwestern corner of the Continental United States. So, for the Fall, 1956 tour, I twice ventured, with my opera sidekick Stephen, to Los Angeles’ Shrine Auditorium, where San Francisco Opera was presenting Tebaldi, Christoff and Wagner to the City of the Angels. Verdi’s “Simon Boccanegra” became the first Italian opera I ever attended.

The venerable Shrine Auditorium, home to the Al Malikah Shriners of the Ancient Arabic Order of the Nobles of the Mystic Shrine, is an architectural triumph, then only 30 years old. That massive structure, adjacent to the campus of the University of Southern California, seats 6300 persons. Its audiences have included almost every famous person ever associated with Los Angeles and its most famous neighborhood, Hollywood. This was a venue in which international opera stars could be appreciated as celebrities as well as artists.

Southern California, although far from Milan, whose press had whipped up the fiction of a feud between Tebaldi and Maria Callas, experienced the excitement of the idea of dueling celebrity divas. I regarded myself as a Tebaldiano (a term known to mid-1950s San Diego opera fans and still readily found on Italian websites, particularly after Tebaldi’s passing in December, 2005.) However, I readily indulged on the Callas side as well and cherished Callas’ recordings of Donizetti’s “Lucia di Lammermoor”, Bellini’s “Norma”, Mascagni’s “Cavalleria Rusticana” and Verdi’s “Ballo in Maschera”.

In the succeeding half-century, there has been nothing quite like the excitement this supposed rivalry created, nor that excitement’s impact on sales of their record albums and tickets to their live performances. Although there have been a number of important Italian sopranos since Tebaldi’s ascendancy, she achieved a popularity not quite matched by her successors. I have never heard anyone call themselves, say, a Freniano for Mirella Freni or a Scottiano for Renata Scotto.

[Below: Renata Tebaldi as Maria Amelia; edited image, based on a photograph, courtesy of San Francisco Opera.] 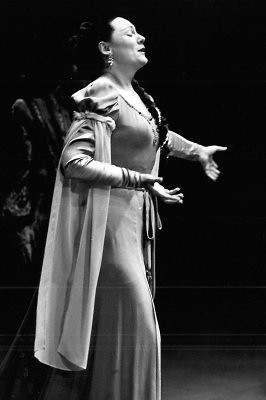 We had secured tickets in the upper balcony, so opera glasses in hand, we awaited the dimming of the famously massive, multi-colored Shrine Auditorium crystal chandelier. Soon Leonard Warren (Boccanegra), Christoff (Fiesco), and Tebaldi (Maria Amelia) had us at the edge of our seats. Even though it hosts an audience double the size of such massive American opera houses as San Francisco’s War Memorial (the Shrine’s balconies alone had more seats than the the War Memorial), the San Francisco Opera found it to be a surprisingly hospitable place for opera productions, whose friendly acoustics favored a large and expressive voice. (Nor did it hurt that one sold out performance at the Shrine generated the revenue of two sold-out performances at the War Memorial — at half the performance costs.)

And Tebaldi, who was able to produce a beautiful sound with a full-voiced fortissimo, also could project a pianissimo that was ravishing even in the most distant rows of the top balcony. Christoff’s voice also was extraordinarily effective in a large space. The voice that seemed less well-suited for the cavernous Shrine was Warren’s, although his duets with Tebaldi were effective, as was the majesty he portrayed in the Council scene. Sadly, Warren died three and a half years later (onstage at the Metropolitan Opera) before I could see him in another performance.

I knew that “Simon” was a rarer work than the most popular Verdi operas, but not that the performance I attended was only the fifth performance of that work in the history of the San Francisco Opera. In 1941 it had been mounted for Lawrence Tibbett (Boccanegra), Stella Roman (Maria Amelia), Frederick Jagel (Gabriele Adorno) and Ezio Pinza (Fiesco), with Erich Leinsdorf conducting, but with a single performance in San Francisco and another in Los Angeles.

The second and third performances ever at the War Memorial occurred on October 9 and 13 of 1956, with a return to Los Angeles a week later on October 20. All three 1956 performances were performed by Warren, Tebaldi and Christoff and conducted by Oliviero de Fabritiis. The memorable Paolo was Heinz Blankenburg, an Angeleno, eventually a UCLA Professor of Music. Only the Gabriele Adorno was inadequately cast (the tendency to under-cast this important tenor role repeated in the subsequent history of the San Francisco Opera), with Roberto Turrini no match for his internationally renown colleagues. It was the only time I saw Warren, Christoff, or Turrini in live operatic performance.

[Below: Gabriele Adorno (Roberto Turrini, left) makes peace with Simon Boccanegra (Leonard Warren, center) when he learns he is the father of Maria Amelia (Renata Tebaldi, right); edited image, based on a photograph, courtesy of the San Francisco Opera.] 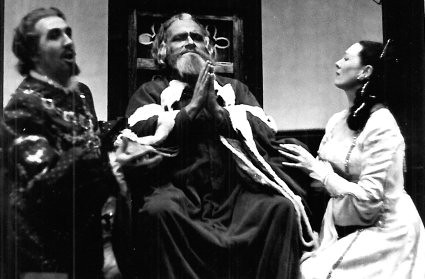 Although Tebaldi’s presence in San Francisco at the beginning of her American career was a major triumph for the San Francisco Opera, she did not accumulate a large number of performances with the compnay. In fact, with the company she performed seven roles, only six of which were heard in San Francisco (each of these six repeated in Los Angeles). Incredibly, she sang a single performance on tour in Fresno as the Countess in Mozart’s “Nozze di Figaro”, with Bidu Sayao as Susanna and Italo Tajo as Figaro.

The 1956 season saw her performing two Toscas in S.F., one in Sacramento and one in L.A.; plus two Maria Amelias in San Francisco, in addition to the one described here in L.A. She did not return until 1965, when she repeated Maddalena three times in San Francisco and once in L.A., as well as performing Mimi in Puccini’s “La Boheme” three times in S.F. and twice in L.A. In summary, Tebaldi performed with the company in San Francisco only 20 times over four seasons (of which I saw three performances), nine times over those same seasons in Los Angeles, and one time each in Sacramento and Fresno.