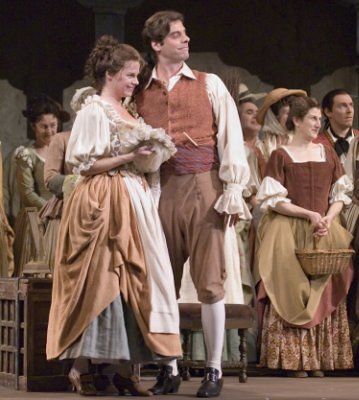 The history of San Francisco Opera has been to reserve performances of Mozart’s “Le Nozze di Figaro” for established international stars in mid-career.

Thus, persons I have seen have included the likes of Sir Geraint Evans, Hermann Prey and Samuel Ramey as Figaro, Lucia Popp as Susanna, Eberhard Waechter, Wolfgang Brendel and Tom Krause as Count Almaviva, Federica von Stade as Cherubino, and Dame Kiri Te Kanawa as the Countess, all of whom have long discographies of complete opera recordings, most in place before they appeared in Mozart roles here. 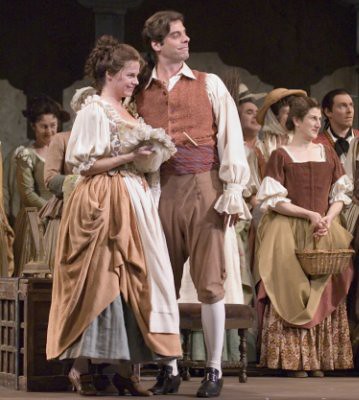 Of the Summer San Francisco cast, only Ruth Ann Swenson’s credits would be comparable in this stage of her career to this stellar list of twentieth century opera stars.  Yet the cast proved to be worthy of this assignment, and, although early in their careers, have already come to the attention of the world’s other major opera companies.

The Figaro, John Relyea, a former Adler fellow, who appears as Figaro at the Met and Vienna Staatsoper, and will open Covent Garden as Mephistopheles in Gounod’s “Faust”, assumed his first major role at the company that nurtured his career. 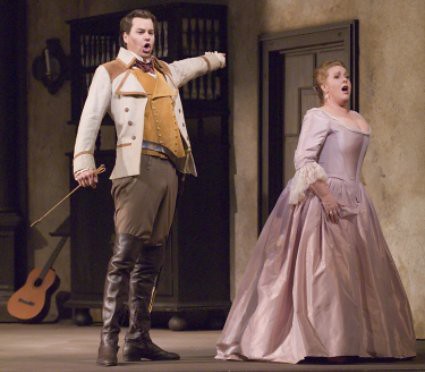 Likewise, Peter Mattei has already appeared as Almaviva at the Met, Salzburg Festival and at the Paris Opera.  The Susanna, Camilla Tilling, has credits that include La Scala, Covent Garden and the Met.

Claudia Mahnke, whom former General Director Pamela Rosenberg (whose cast choices will be in evidence for a considerable period) had introduced to San Francisco, already has established herself here with memorable performance in 2002 as the Composer in Richard Strauss’ “Ariadne auf Naxos” and in 2004 and 2005 performances as Dorabella in Mozart’s “Cosi fan Tutte”.

The orchestra played beautifully under the baton of Roy Goodman.  Each of the principals provided world class singing, with Swenson, as expected, ranking as one of the truly great contemporary Countesses. 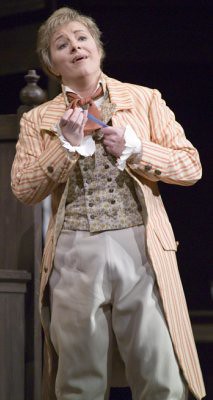 Special recognition is also deserved by Greg Fedderly, who made the most of the character of Don Basilio.  Peter Strummer, who has charmed San Francisco Opera audiences for over thirty years with his extraodinary range of character performances, instantly made the gardener Antonio, a role sometimes given too little attention by opera managements, into a comic experience to be celebrated.

The production is by Zack Brown, and was created in 1982, the first year of the General Directorship of Terence McEwen, for Lucia Popp, Hermann Prey and Tom Krause (although the creative decision to sponsor a new production was made during Kurt Herbert Adler’s regime).

It was Brown’s second commission for the San Francisco Opera, Adler having chosen him to create a new 1979 production of Ponchielli’s “La Gioconda” for Luciano Pavarotti and Renata Scotto – the first Public Broadcasting System telecast from the San Francisco Opera and one that provided Brown with Emmys for his mantelpiece.

Brown returned during the General Directorship of Lotfi Mansouri to create new productions for San Francisco Opera’s first mountings of Rossini’s “Otello” and Rimsky-Korsakov’s “Tsar’s Bride” for the War Memorial.

He also created the sets for Verdi’s “Don Carlos” (for productions in both Italian and French), was the creator of Washington National Opera productions rented by the San Francisco company, and was invaluable in helping develop productions for the 1996-97 season in makeshift surroundings when the War Memorial Opera House closed for earthquake repair.

Thus one is startled that in the opera program, Brown received no credit for the “Nozze” production. Instead, there is the notation “[s]cenery, props, costumes, and wigs constructed in the San Francisco Opera workshops”. 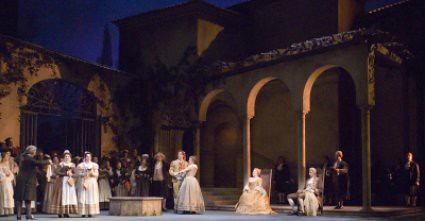 The “Nozze” is not Brown’s best work.  The first two scenes are interior spaces (the servant’s quarters that Susanna and Figaro will occupy and the Countess’ bedchamber) that lack the lightness and color of Brown’s later work, but they are right-sized for the San Francisco Opera stage, and there is no reason to discard or even to revise the production.

The exterior third and fourth scenes – the former the count’s courtyard which evokes the spirit of sunny Spain, the latter the formal gardens where the opera’s numerous deceptions are revealed – hit closer to the mark.

But with no budget existing to invite Brown to supervise the revival of “Nozze di Figaro” (nor of his production of Verdi’s “Un Ballo in Maschera” obtained from Miami’s Florida State Opera for opening night of S. F. Opera’s 2006-07 season), an obviously unpleasant exchange of opinions has taken place between Brown and the current opera management.

Since San Francisco owns the production, Brown cannot refuse to let it be used, nor would there be any motivation for an opera director to fail to acknowledge the creator of a production that has been performed at this house in four separate seasons. Obviously, Brown has asked that his name not be shown in the production credits, just as sometimes a Hollywood star will demand that his or her name be removed from movie credits.

New General Director David Gockley has publicly expressed his desire to return San Francisco Opera to the glory days of the Adler trusteeship.  One of Adler’s goals was to develop a series of world-class San Francisco Opera productions to cover the standard repertory, and both Brown’s “Gioconda” and “Nozze di Figaro” were to be part of this.

One of Gockley’s goals is to reassure the opera-going public that the turmoil over what kinds of productions to present to the San Francisco opera public has ended, and to curtail the profligate spending on headstrong “concept directors” with puerile ideas.

(This invective is decidedly NOT directed against Brown, although one can find hints as to whom I am referring on other web-pages on this website.)

Another goal, I believe, should be to prevent the further erosion of the legacy of workable – more often than not inspired – productions that began to be accumulated in the Adler era.

This web-page chronicling a really good performance of “Nozze” is not the place for a discussion of how one relates to the creative spirits that developed past operatic productions, nor to the need of inventorying the current status (including the whereabouts and even existence) of important past productions, but, of course, such subjects may well be recurring future website themes.