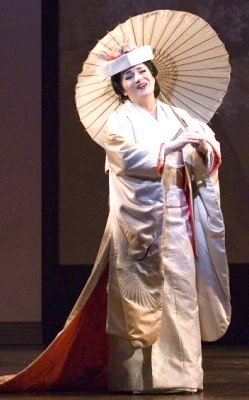 Giacomo Puccini, who had no fluency in English, was drawn to the stage business, sets and avant-garde lighting in two of David Belasco’s Broadway plays – “Madam Butterfly” and “The Girl of the Golden West”. Although the plays, whose dialogue is impossibly out of step with 21st century sensibilities, are irrevocably sows ears as plays go, their stories live on in the two extraordinary 20th century silk purse compositions that Puccini derived from them.

In fact, “Butterfly”, after an initially shaky start that required three revisions, became and almost unquestionably remains the most popular of all 20th century operas. (The only other real contender for the most popular opera spot is Puccini’s “Turandot” although Puccini’s “Tosca” might achieve an honorable mention for popularity, if we hold that the new millenium began in 2000, and that the year of “Tosca’s” premiere, 1900, belongs to the 20th century.)

Yale Professor Michael Yeargan has become the most prolific designer of San Francisco Opera productions over the past 13 years, with eight productions to his credit.  He is the set designer for this production.

The stage direction and production conceptualization is the work of Ron Daniels, whose principal reputation is in the production and artistic direction of Elizabethan drama, with important past assignments with the Royal Shakespeare Company. Although his ideas for “Butterfly” have been seen before, the 2006 version does not contain such distractions as pondering how the boy conceived by Butterfly and Pinkerton might have coped as a 20th century Amer-Asian.

Instead, Daniels and Yeargan focus all of our attention on the theatrical event that so attracted Puccini to Belasco’s play – the lighting of the night spent by Butterfly, Suzuki and the boy waiting for Pinkerton’s expected return and the arrival of the fateful dawn. Instead of the conventional three act version of the opera, where Act II ends partway through the night, and Act III heralds the dawn, Yeargan (and the San Francisco Opera musical staff) returns to the original idea of “Butterfly” being a two act opera.

A century has passed since Puccini presented us with his four versions of the opera (and half a century since my first encounter with a performance of it). The public loves it. It is a blue-chip warhorse. But something more may be going on with “Butterfly”. It appears to be at the beginnings of a major re-evaluation of Puccini’s musical gifts.

Julian Budden’s master-work “Puccini”, whose detailed analyses of the musical scores of “Butterfly” and “Fanciulla” demonstrate their extraordinary composition, will be a cornerstone of that re-assessment.

[Below: Patricia Racette as Cio Cio San; edited image, based on a Terrence McCarthy photograph, courtesy of San Francisco Opera.] 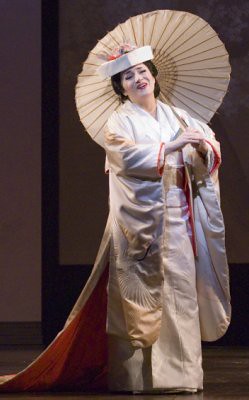 Puccini is already recognized as the greatest of the Italian disciples of Wagner, and he also has a claim of being the greatest of all of the post-Wagnerians. That is why it is instructive that Robert Wilson’s Los Angeles production of Butterfly, which seems to say, forget all the trappings of the story, just listen to how wondrous the music is – elicited such different reactions from two unrequited Wagnerians – Tom and Stephen – chronicled elsewhere on this website. 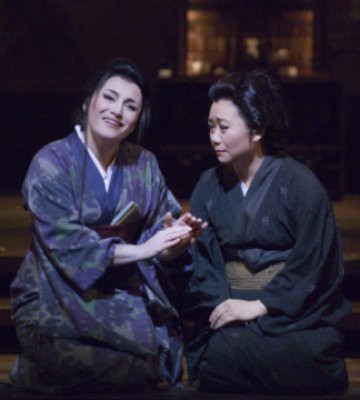 But Daniels and Yeargan are steering us in another direction. Be enraptured by the wondrous music, but also immerse yourself in the story and its emotions and the flow of the drama and to the lighting, just as the Master himself set out to capture what he saw as transcendent in the Belasco play.

The Daniels-Yeargan concept balances abstraction with specific details that give us the sense of being in a Japanese place. Unlike San Francisco’s predecessor productions, there is no small onstage Japanese house with physical dimensions that one walks out of and into, yet through a few evocative structures and the magic of screens we sense that we are indeed in Japan, where cherry blossoms, and song-birds, and kimonos and parasols, and American prints of the Statue of Liberty and the Capitol and Theodore Roosevelt are all part of our experience.

And Daniels and Yeargan recreate for us the magic that Puccini experienced in the vigil of Butterfly, Suzuki and the boy. Flower petals fall. As the San Francisco Opera orchestra plays Puccini’s immortal music, and the chorus hums, the silhouette of a warship dominates the back screen, then fades into murkiness. Eventually lights appear on the ship, then dim, while the whole disappears into the Nagasaki fog. Then, through the fog, comes the dawn.

[Below: Madama Butterfly (Patricia Racette, standing) and Suzuki (Zheng Cao) are joyous as the warship Abraham Lincoln appears through the fog; edited image, based on a Terrence McCarthy photograph, courtesy of the San Francisco Opera.] 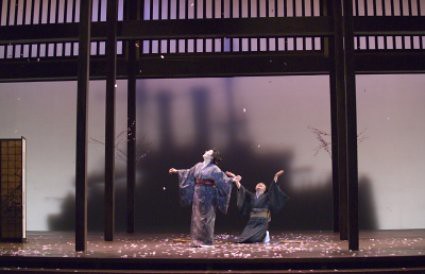 Such an effective production deserves the finest of musicians, and, in most respects, San Francisco Opera met that challenge. Conductor Donald Runnicles led a resplendent opera orchestra. Patricia Racette was an affecting Butterfly, singing beautifully. Zheng Cao, the Suzuki, provided a fully-realized performance of this important role.

Franco Farina, debuting as Pinkerton, probably would never be a San Francisco favorite, but he sang well enough and had no problem in establishing Pinkerton as a less than sympathetic character. Philip Skinner as the Bonze again deserved special recognition as a valuable performer for important character roles. Only Phillip Joll, who musically did not meet the measure of a big league Sharpless, would receive low marks for this performance.

For my observance of the 50th anniversary of my first performance of “Butterfly”, see the web-page: Madama Butterfly – November 1, 1956