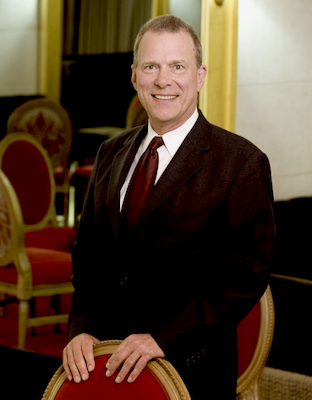 The ten productions and principal casts of the San Francisco Opera’s 2006-07 season were announced on January 12th, 2006 by newly installed San Francisco Opera general director David Gockley. An analysis of the prospective season, with my comments, is displayed here. 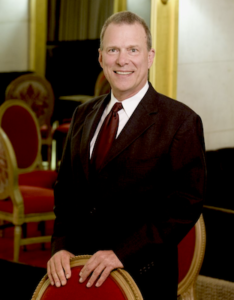 Recognizing that most decisions on casts (and therefore operas) were made several years back, well within the tenure of the maximally controversial former S. F. Opera General Director Pamela Rosenberg, the season is deliciously symbolic of a break with the past. The opera chosen for opening night, “Ballo in Maschera” was the same opera that opened the new 1982 first season of General Director Terence McEwen. Although this was the first planned succession of general managers in San Francisco Opera history, the transfer of power from the formidable Kurt Herbert Adler to McEwen was not a particularly smooth one.

McEwen pulled out all stops to get Luciano Pavarotti to make a single appearance as Gustavo (Riccardo) to Montserrat Caballe’s Amelia at the season opening night performance. McEwen, formerly an official of Decca Records’ classical division, was one of Pavarotti’s mentors, but Adler had become closely associated with Pavarotti’s career by mounting several operas for Pavarotti to explore new roles (his first “Ballo” Riccardo, his first Fernando in Donizetti’s “La Favorita”, his first Rodolfo in Verdi’s “Luisa Miller”, his first Manrico in Verdi’s “Il Trovatore”, his first Calaf in Puccini’s “Turandot”, his first Enzo in Ponchielli’s “La Gioconda” and his first Rhadames in Verdi’s “Aida”. Pavarotti did appear for the one performance, and did return for the 1988 production of Puccini’s “La Boheme” with Mirella Freni and Nicolai Ghiaurov (available on DVD as is the 1981 S. F. “Aida” and hopefully someday also the 1979 S. F. Zack Brown “Gioconda”), but the Pavarotti association with San Francisco effectively vaporized after the Adler era.

The importance of the glittering opening night audience having a happy experience was exemplified by one of the disasters of the Rosenberg era. She had planned to open a season with Rimsky-Korsakov’s “Coq d’Or”, but was slammed by the financial realities of a mounting deficit that made the preparation of the elaborate costumes for that production prohibitive. “Le Coq d’or” was cancelled and opening night moved to the next opera to open, Virgil Thomson’s “The Mother of Us All”. All previous directors instinctively knew that post-Turandot 20th century works need to stay out of the opening night time slot. The Thomson piece was a monumently bad choice at a difficult time for the company. This accelerated the “Eurotrash” debate which did nothing to secure the Rosenberg tenure in San Francisco.

Happily, the Gockley choice of production designer, Zack Brown, is the antithesis of “Eurotrash” and “Brit Pop”. His elegant and intelligent presentations of the standard repertoire grace many of the stages of the major American opera companies.

The other nine operas of the season are as follows:

San Francisco Opera was home to many Jean-Pierre Ponnelle productions, and his “Carmen” was one of his most extraordinary achievements. Striking and highly original sets, all faithful to libretto and score, are created for all four acts. Now 25 years old (commissioned for the Kurt Herbert Adler’s farewell season as San Francisco Opera’s general director), these sets (as well as other Ponnelle productions for which no permanent record exists) deserve to be recorded on DVDs.

Robert Carsen and Tobias Hoheisel, respectively the stage director and set designer for the famous Paris Palais Garnier production of Handel’s “Alcina” in which all the men appeared nude, are developing the new production of Gluck’s “Iphigenie en Tauride” for the Chicago Lyric Opera, to be premiered in September, 2006. The production will travel to San Francisco for the Summer 2007 season with basically the same cast as the Chicago production and will also be seen at London’s Covent Garden.

David McVicar’s 2003 production of “Don Giovanni”, presented at the Theatre Royal de la Monniae in Brussels, was co-produced with the San Francisco Opera, with commitments to be produced also at the Luxembourg and Lille opera companies. The production explores what McVicar sees as the dark side of the opera.

The Chicago Lyric Opera production of November, 2005, is a traditional presentation of the opera by Olivier Tambosi and Frank Phillip Schloessmann, noted for elaborate period costumes and handsome sets.

The least controversial San Francisco Opera new production of the Pamela Rosenberg era, it is the Godzilla of all “Barber” productions, enormous in its physical size. It is also the only “Barber” production to require its Figaros (in 2003-04 Nathan Gunn and Thomas Hampson, for 2006-07 the former as the Primo Figaro) to travel back and forth on Vespas. Not originally planned for this season, it was a late replacement for a scheduled new production of “Lucia di Lammermoor”, which apparently has been scrapped.

The 1990 San Francisco Opera production of “Die Fledermaus” is a typical achievement of the Lotfi Mansouri era, directed by Mansouri with sets by Wolfram Skalicki (who was a workhorse set director for San Francisco new productions from 1962 through the remainder of Kurt Herbert Adler’s general directorship). It most memorably introduced the costume designs of Thierry Bosquet, whose costumes and sets have graced several subsequent San Francisco Opera productions, including the production design for “Der Rosenkavalier”, also to be revived (with Mansouri directing) in 2006-07.

For over 65 years, the San Francisco Opera has presented “Der Rosenkavalier” with great reverence. From 1940 through the mid-1960s two of the most famous 20th century interpreters of the German repertoire, Lotte Lehmann and Elizabeth Schwarzkopf, successively owned the role of the Marschallin, and few first rank Marschallins since have skipped performing the role in San Francisco. Were Strauss and Hoftmanstahl, the collaborators in its composition, to return to life, they would find their stage directions explicitly followed. They would even recognize this production, new in 1993, because the production designer, Thierry Bosquet, based it on the Alfred Roller sets created for the opera’s premiere. European capitals (such as Paris) may “animate” their Rosenkavaliers, but no Euro-heresy infects the Knight bearing the silver rose in San Francisco.

Michael Yeargen’s “Rigoletto” sets were created for the San Francisco Opera in 1997, for its 75th Anniversary Year when the Opera moved back into the War Memorial Opera House, after its 18-month closure for earthquake repairs. Not all were happy with Yeargen’s designs, which replaced Jean-Pierre Ponnelle’s popular 1973 conceptualization. However, the unnerving experiences with Verdi productions in recent years have cast this production, which accepts Renaissance Mantua as the time and locale for the opera and has sets and costumes confirming agreement with Verdi’s intentions, in a more favorable light.

In 2003, the San Francisco Opera rented a Seattle Opera production of Verdi’s “Il Trovatore” so terrible that even departed General Director Pamela Rosenberg admitted that she wished she had chosen a different production. This year, Seattle General Director was quoted as saying San Francisco’s 2005 production of Verdi’s “La Forza del Destino” was the most brilliant reading of the piece he had ever encountered, a sentiment that, so far, I find no evidence of his retracting. The reports of the 1998 Seattle production of “Tristan” are ominous, suggesting that continued wariness of these products from Cascadia are in order. Excepting the 2001 “Meistersinger”, the sparse fare of Wagnerian opera presented in San Francisco in the 21st century, consisting of the 2000 Lehnhoff “Parsifal”, the 2004 “Dutchman” thing, and this “Tristan”, give no hint to a newcomer to Wagnerian Opera in San Francisco as to Wagner’s intentions in stagecraft. One becomes nostalgic for the 1999 “Ring”, the last time Wagner’s myth-based operas were presented in S.F. productions in the Wagnerian ballpark. The good news is that the off-base ideas are all the intellectual and physical property of other opera companies.