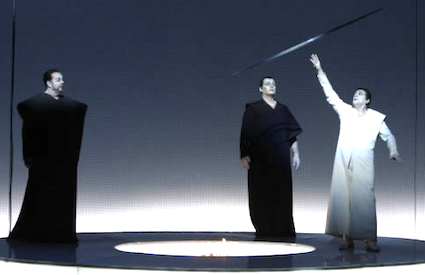 Stephen promised an exposition of his thoughts on Robert Wilson’s “Parsifal”. It is presented here:

PARSIFAL is my desert-island opera. I first saw it at the Met on Good Friday in 1960, then the summer I spent at Bayreuth (1966) studying with the Wagners. I saw Wieland’s breathtaking production numeroustimes, in performance and in rehearsal. Since then I have seen it with you, if I recall correctly, in SF in the early 70s; later at the Met with Vickers and Ludwig, then at the Met in 91, with Domingo. Sorry, but that [Met] production was NOT a good one, with silly daisies bouncing everytime anyone took a step, and the setting was as undistinguished as the singing was glorious. Levine conducted a performance that was so slow people near me thought he had fainted on the podium. I did too. (It was at least an hour longer than Nagano’s.)

Frankly, these days, I had rather see Wilson’s spare and often lucid interpretation than anything else. I did not care for much of the second act, but the two grail scenes were transforming for me. (The same goes for his wonderful BUTTERFLY, which I thought nearly perfect).

When Gurnemanz sings of “time and space are one” and the scene shifts,I suddenly realized what he was doing: it seemed to me that the whole Grail world, since its corruption, travels in time and space looking for the redeemer, and every time it finds one, it descends and takes him in; the knighthood is full of failed redeemers, including Gurnemanz.

This time it gets it right! And the way Domingo performed his silent part during the scene, downstage lower right, was riveting! When he exits in Act I you remember he takes exactly the steps the young boy did at the beginning, and you realize that, step by step, Parsifal isslowly but surely falling into the rhythm of the Grail music. It’s the visual proof that he’s the guy! It seemed at the end, when the spear left his grasp and hovered, that it, too, was redeemed. For me, that moment was worth the entire opera. 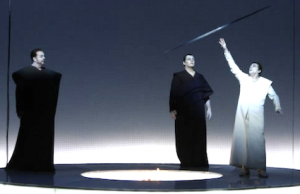 I wasn’t entirely thrilled with all the stuff Kundry [Linda Watson] had to do, and I have a colleague who spoke with her at a lecture a few days into the run, and she said that after every performance she and Domingo were heartbroken that they were not allowed to touch, to kiss. (I hear from those who have seen it that his LOHENGRIN at the Met is now very highly regarded and acclaimed.)

Wilson is not for everybody, but he is enormously intelligent and avoids that horrendous Euro-trash that we have even had at Santa Fe! By the way, Pamela [Rosenberg], your [San Francisco Opera’s] apparently not-much-late-lamented General Director, was in our Master Class at Bayreuth that summer!

Maybe this works for you; maybe it doesn’t. But at least Wilson gets one to thinking, and I can’t help but believe that old Wagner himself would have loved at least part of it; after all, he hated the boundaries that stage technology at the time placed on his imagination. I think any of his works must, in the end, take place in the individual imagination, anyway.

Too long, but there it is,
Best, Stephen