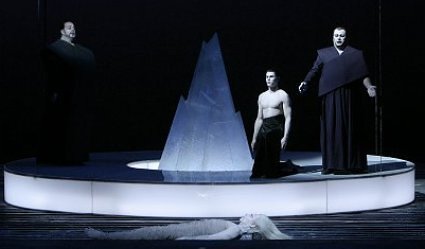 Nine of the ten operas of Richard Wagner’s maturity abound in magic and spells – enough potions, curses and enchantment to fill a whole semester in Harry Potter’s School of Wizards. Even in the tenth opera, “Die Meistersinger”, the hero’s prize song comes to him, as if by magic, in a dream – fully orchestrated with lyrics.

In “Parsifal”, Wagner, a diligent scholar of medieval source material, summoned his unbounded creativity to develop each of the story elements of his final opera. He had the power to express his ideas musically and theatrically. From an early period in its creation, he became so specific on what he intended as the “Parsifal” experience that he took steps to assure that the opera could only be performed at Bayreuth, the theater he invented, under the guardianship of the trustees of his legacy.

It has been a century since that trust was shattered quite literally, and “Parsifal” is performed throughout the world, sometimes in performances that stick close to Wagner’s intentions (as evidenced in his stage directions and accompanying explanations) and sometimes far afield from what he intended.

One thing is certain. There is a ready market for live performances of Wagner’s operas that has existed since their composition. If anything, there is a far larger group of “Wagnerians” now than in any point in the past. They get his operas, they get the stories, they even travel to where they are performed for no other purpose than to see them. As cherished as “Madama Butterfly” may be, it is unusual to hear a person say “I am flying from San Francisco to Chicago, for no other purpose that to see the Lyric do “Butterfly.'” Replace “Butterfly” with “Goetterdaemmerung” and the sentence makes sense.

Over the past 20 years or so, there has been a great effort to familiarize opera-goers with the operas of Handel and Monteverdi, and to some extent, with Vivaldi also. Building such an audience has been hard work, but those who have acquired the taste for the music in these operas have been rewarded. Their stories seem usually to be quite remote from our lives, so opera impresarios have permitted production designers and stage directors to monkey around with the settings of the stories to demonstrate to opera audiences that the emotions expressed in the individual arias are timeless. Thus, at San Francisco Opera, Handel’s “Rodelinda”, which is supposed to take place in the royal court of early medieval Lombardy, is time- and place-shifted to the mob struggles of what probably is meant to be Al Capone’s Chicago (some of the mobsters are carrying violin cases), with an eye to the human emotions that mob bosses do feel, as has been taught us by “The Sopranos”.

It is quite improbable that we will ever see a Handelian opera performed in exactly the way that Handel intended. For example, we suspect that counter-tenors do not sound like rococo-era castrati, but do not expect the availability of any of the latter, certainly not trained following the contemporary practices of Handel’s time. We know the instrumentation has a different sound than our opera orchestras, but even if we tried to produce these operas with period instruments, we know they would be out of balance with the size of the United States opera halls. So almost every part of a Handel production is changed for modern audiences from what he intended, even when we try to be as faithful as we can be under the circumstances.

This is not so with Wagner. He conceptualized the entire operatic experience, writing music, libretto, and stage directions. He thought about (and actualized his thoughts) on how the operatic theater should be designed. He had a lot to do with the sound of the various instruments in the modern orchestra (especially the orchestras assembled for Wagnerian performances). Theatrical technology has changed over the last century, so that there are many more opportunities to use light and stage machinery to enhance productions, yet Wagner foresaw much of this and can be read as pre-approving the future use of such technology.

What has crept (or perhaps blasted its way into) Wagnerian performance is a split in attitudes between the strict adherence to Wagner’s musical intentions from strict adherence to the theatrical intentions. We doubt that even in “Robert Wilson’s Parsifal” as the Los Angeles production is called, that Wilson could have persuaded conductor Kent Nagano to substitute the sound of a circus calliope for the strings that are playing the theme of the Grail, or adding alto and bass saxophones to the scene with the Flower Maidens, even if he testified it would enhance the theatrical experience he is trying to convey. 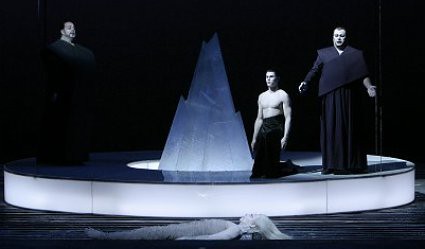 But what is Wilson trying to convey in his production? There is a point in the super-title translations of Gurnemanz’ expressed frustration with Parsifal in Act I of the Los Angeles production. “Do you not understand what is happening here?” He might have addressed (actually he did) the question to the assembled Los Angeles audience whom I suspect were as dumbfounded at the Wilson production as Parsifal was to Gurnemanz’ ranting that Parsifal does not understand the meaning of the spell placed on Amfortas and the virgin knights of the Holy Grail.

The Grail, as this Los Angeles audience (that surely contained persons personally enriched by the Indiana Jones movie franchises whose second sequel to the film about finding the Ark of the Covenant was a film about Sean Connery and Harrison Ford searching for the Grail), is the cup that the Christ drank from at the Last Supper. In the time in which the opera’s action is placed, the Knights of the Grail are its guardians.

Parsifal’s consternation is abetted by the confusion introduced by Wilson’s remythologizing the spell. We have wandered into Puccini’s “Turandot” where the Grail has been transformed into a jagged block of ice, which in the third act is a burning flame. To make this work, Wilson creates a circular appurtenance, shaped like a giant washer, rather like a Boy Scout camp fire-ring, except that the sides are lit like fluorescent kitchen lighting and the top is like a countertop of some material like might be available through the Home Depot specialty appliance center.

The fire-ring appears twice. In the first act, it descends from the sky as the ice block is pulled from stage right to center stage until the ring surrounds and captures it. There it becomes a circular runway where Gurnemanz, Parsifal, Amfortas and a youth, naked from the waist up (reminding one of the Dyer’s Wife’s Vision of a Young Man from Richard Strauss’ “Frau ohne Schatten”) can move about. The first three characters were, of course, conceived by Wagner. In the third act, the fire-ring descends again, but, instead of ice, there is fire. Again we have the Wagner threesome, joined by Wilson’s youth.

It is not only the block of ice that is pulled from stage right. So is an ashen white Titurel in Act I and pale giant birds-of-paradise (the flower) throughout the second act flower-maiden scene. Klingsor’s castle is in its first permutation a dark narrow trapezoid with a lighted slit in which the wizard appears. Later in Act II a land mass also is slowly pulled across stage (tectonic forces?). As Parsifal breaks the spell, we see it as another Klingsor hideaway on which he is destroyed.

Nor is the fire-ring the only object to descend from the sky. So (when the talk is about swans) is a giant upside down bird wing whose feathers are first visible from the top of the stage, but, as it descends below the stage’s horizon, takes the appearance of a small hill.

Some of Wilson’s ideas might survive an inspection by some Parsifal Police, established to assure that productions don’t stray too far off the Wagnerian farm. The first act seemed to begin as a staged tone poem (a la Disney’s “Fantasia”) where shimmering horizontal lines, evoking the flow of water, drift up and down, as if we were viewing a production geared to the opening notes of Wagner’s “Das Rheingold”. Eventually, what sometimes seems to be a lake (where the swan that Parsifal kills lived) and sometimes hard ground comes into focus. Instead of the usual eight or so flower maidens, there are 32 of them, attending to the task of trying to seduce Parsifal, while taking care not to become entangled in the giant birds-of-paradise being pulled through their garden.

But flower maidens, swans, and Klingsor’s realm are all part of the spell that is the central point of Wagner’s “Parsifal”. Spells in Wagner are pretty linear. They are cast for a reason and have built into them specific behaviors that, if performed, will break the spell. (Gurnemanz spends a lot of time talking about the rules of this opera’s particular spell.)

Wilson wants to free himself and us from this particular Wagnerian spell, and to match the music with a new spell that he has created that entangles Gurnemanz, Kundry, Amfortas, Parsifal, the two knights and the four esquires in new languages and behavior for which Wagner has not prepared us. Thus, all of the Act I/Act III characters are clothed in flat and angular, mostly black costumes. They move in unexplained ways, communicating with each other by a series of postures and hand movements for which we have no translation. We know that when (according to the libretto) Parsifal kisses Kundry in Act II, the two principals are standing apart, not facing each other, and have their hands positioned as if part of some unknown ritual.

Two non-Wagnerian characters are enlisted to add to these non-textual mysteries. At the beginning, a small boy, slowly, with stylistic footsteps crosses from a stage left floor opening to stage right. (Remember, much of the rest of the action consists of objects being pulled from stage right to stage left.) The half-naked youth first appears when Amfortas is bathing his wound in the swan’s lake, later on the fire-ring runway with Amfortas when the fire is still ice, and again, fires a-blazing, when Parsifal heals Amfortas’ wound with the recovered spear. And, for whatever resolution might be intended, the little boy reappears in the third act. 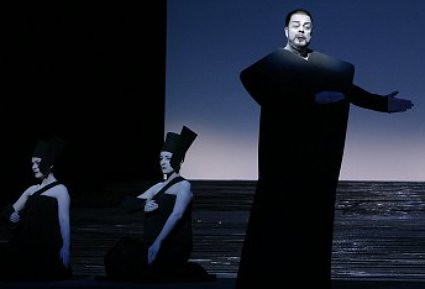 Surely, Wilson can sit down with us and explain what his spell means, what this element symbolizes, etc. But why do we go through this? Wagner, who spent a lifetime collecting, comprehending and transforming many of Europe’s heritage of myths, is one of the humanity’s master story-tellers. But he has done something that transcends the storytelling medium by inventing a wholly new form (the Wagnerian opera) for presenting those stories. Wagner’s ideas are public domain, so nothing stops Wilson from taking ideas from his operas to create something else, like Baz Luhrmann taking “La Boheme” to Broadway or maybe even more to the point, Elton John recomposing “Aida”.

But in an era where there is a public will for unadulterated Wagner, why not let Wagner be Wagner?