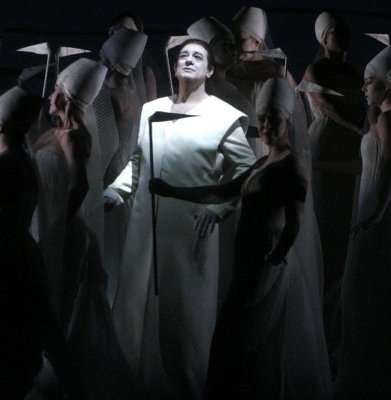 64 year old Placido Domingo demonstrated to the Dorothy Chandler Pavilion audience that Wagner, sung beautifully, is magical. His incredible voice, its legato still intact, brought to his Parsifal the sensitivity and dramatic expressiveness that I vividly recall from seeing him perform, among other roles, Don Jose in “Carmen” and Cavaradossi in “Tosca” in his 20s; Andrea Chenier, Otello, Dick Johnson in “Fanciulla del West”, Turiddu in “Cavalleria Rusticana”, Canio in “I Pagliacci” and Samson in “Samson et Dalila” in his 30s, Hoffman in “Tales of Hoffman” and Vasco da Gama in “L’Africaine” in his 40s and Stiffelio in his 50s.

Domingo’s venture into Wagner in late career, well after mastering the great dramatic tenor roles of the Italian and French repertoires, is a sign that he knows the capability of his voice and how to extend its longevity. How many of the heldentenors of the past half century assayed Wagnerian roles too early in life, evidenced by our need to seek their earliest recordings, hoping to avoid the bleats and wobbles that crept into their injured voices? (If any of the Los Angeles audience were nostalgic for Wagner being barked and bleated, they were treated to the Klingsor of Hartmut Welker.)

[Below: Parsifal (Placido Domingo) among the flower maidens; edited image, based on a Robert Millard photograph for Los Angeles Opera.] 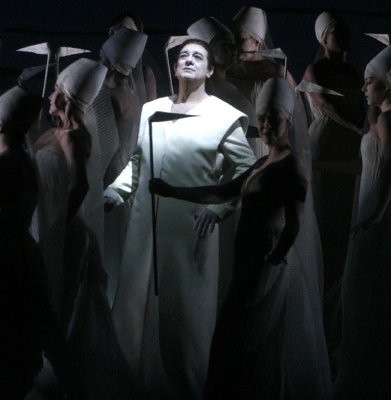 Yet, Domingo’s bravura “Parsifal” was sung under less than ideal conditions. His indisposition was announced prior to the third act curtain (“Mr. Domingo feels a cold coming on, but has consented to continue on”) and, from my first row orchestra vantage point, he did seem in some vocal distress. He also was part of a very physical production, where virtually all of the characters in the drama (both those conceived by Wagner and those conceived by Robert Wilson, whom the program credits as “Direction, Scenic Design, Lighting Design”) had constantly changing poses and hand gestures, like a Noh play.

The scary implication that, if Mr. Domingo’s cold progressed too far, he might be forced to withdraw from the performance, forced me to realize how much this performance’s salvation depended on Domingo and his co-redeemer, Matti Salminen, the Gurnemanz. I had seen Salminen just six weeks earlier in Zurich as Padre Guardiano in “La Forza del Destino.” (My review of the Zurich and San Francisco “Forzas” will be posted elsewhere on this website.)

Gurnemanz is one of the plum Wagnerian bass roles, who dominates the first act and much of the third act, even though much of the time he draws the unenviable role of exposition, relating the details of several key “Parsifal” backstories. Salminen proved himself to be on the short best of breed list of the world’s current Gurnemanzes. 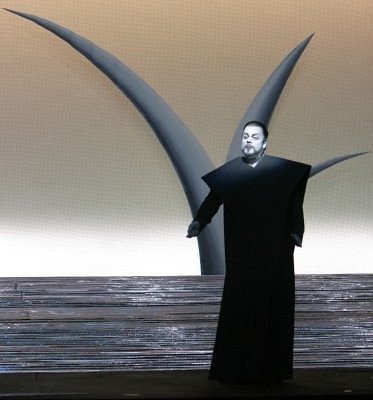 A great Gurnemanz is necessary for a great performance of “Parsifal”, but is not sufficient. The L.A. performance proves that with a great Gurnemanz, a great Parsifal and a great conductor, you can go a long way towards achieving a truly satisfactory performance. (The Amfortas in this production, Albert Dohmen, and Linda Watson, the Kundry, both held their own.)

The full range of Domingo’s ability to convey emotion with his voice was evident in his sympathetic (although curiously staged) second act encounter with Kundry, and throughout the third act, where Wagnerian melody, beautifully played by the orchestra under Kent Nagano’s memorable conducting, is at its lushest.

[Below: From left to right, the Holy Grail, Parsifal (Placido Domingo) and Gurnemanz (Matti Salminen); edited image, based on a Robert Millard photograph for the Los Angeles Opera.] 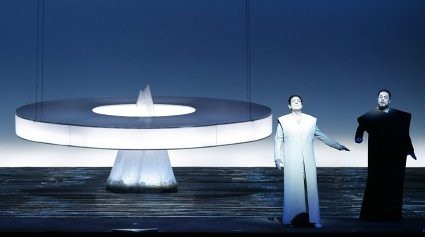 I attended “Parsifal” with Tom and Andrew, who said they look forward to my remarks on the spellbound production – what the program refers to as “Robert Wilson’s ‘Parsifal'”. That will be the subject of a later web-page.