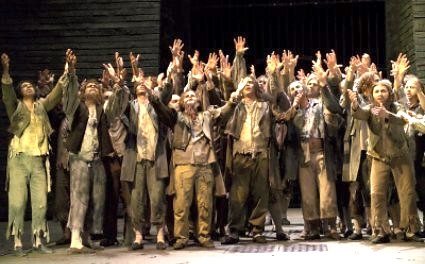 It will take a while to evaluate what the legacy of the Rosenberg era may be, but there is no doubt that, for better or worse, she has left the San Francisco Opera with what must be the largest physical production of Rossini’s “Barber of Seville” in existence. It is also certain that that the “Barber” production will be repeated during the reign of her successor David Gockley.

[Below: The John Gunter basic set for “Fidelio”; edited image, based on a Terrence McCarthy photograph, courtesy of the San Francisco Opera.] 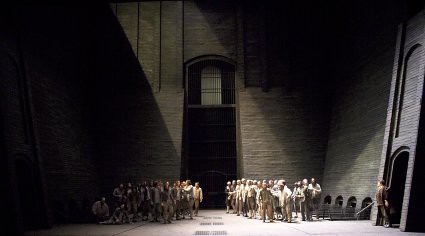 I suspect that no irony was intended that the final performance under her supervision is John Gunter’s 18-year old production of “Fidelio”, dating from General Manager Terence McEwen’s time, which perhaps better than any other production in San Francisco Opera history, fully uses the San Francisco Opera stage.

The stunning production, where the vertical heights of the prison walls soar above the stage, gives the impression of the impenetrable solidity of a “correctional facility” in a totalitarian state. It was a new production in 1987 with Elizabeth Connell and James McCracken, and was revived in 1992 for Hildegard Behrens and Gary Lakes.

The gadgetry of the production is always interesting and drives the drama. Jacquino and Leonore/Fidelio at opposite walls pull down large wooden levers that open grills that permit the prisoners to leave their dark cells to congregate in the central prison yard.

[Below: the Prisoners are brought into the prison courtyard; edited image, based on a Terrence McCarthy photograph, courtesy of the San Francisco Opera.] 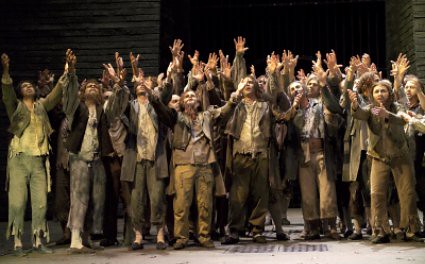 In the scene where Leonore and Florestan are united, to the amazement and constant delight of the audience (applause always greets the scene), the walls of the cellar dungeon where Florestan was hidden collapse around the embracing couple, and the back wall of the prison disappears to open the prison to the people of the surrounding town, so that, as the prison miraculously is transformed, Florestan and Leonore emerge as the central focus of the crowd’s ode to joy.

The “Fidelio” cast was a creditable one. Christine Brewer, whose concert performance in the Los Angeles Philharmonic’s “Tristan und Isolde” is expected to lead soon to her performing Isolde in fully staged productions, is a heavy set woman, and the costume chosen for her (conjuring the image of a burly 19th century tradesman) made her appear quite able to perform the physical labor expected of the jailor’s assistant. Arthur Woodley, in his San Francisco debut season, made a good impression as Rocco.

[Below: Christine Brewer (Leonore, disguised as Fidelio) and Arthur Woodley (Rocco); edited image, based on photographs by Terrence McCarthy, courtesy of the San Francisco Opera.] 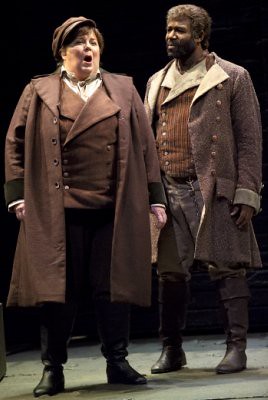 There was a pleasant surprise. When the announced Florestan, Thomas Moser, became indisposed, his replacement was Otoniel Gonzaga, an artist popular in the Philippines, who has covered for Placido Domingo in the United States. He proved to be an artist with a large voice and superb musicianship, whom I would be very happy to hear again.

[Below: Tenor Otoniel Gonzaga performed the role of Florestan; edited image, based on a publicity photograph.] 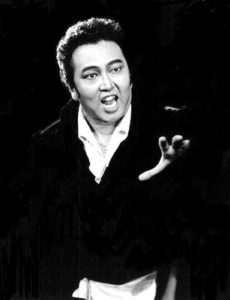 Juha Uusitalo, whose American debut took place in San Francisco Opera’s previous season in the title role of Wagner’s  “Flying Dutchman,” was Don Pizarro. His was a smaller baritone voice than I am used to in that role.

[Below: Juha Uusitalo as Don Pizarro.  Edited image, based on a Terrence McCarthy photograph, courtesy of the San Francisco Opera.] 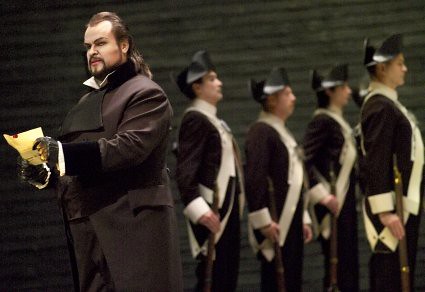 Greta Feeney continued the tradition of casting a light soubrette voice as Marzelline. (General Director Kurt Herbert Adler in 1961 expressed his well-founded belief that this latter role, who gets to perform one of the very few solo operatic arias that Beethoven wrote — no principal in Fidelio sings more than one — really should be cast with a major voice. Therefore, for my first performance of “Fidelio”, Marzelline was performed by none other than 26 year old Marilyn Horne.)

As in the San Francisco Opera’s 1987 and 1992 seasons, Gunter’s imaginative production was complemented by the stage direction of Michael Hampe, who observed both the theatrical possibilities of Gunter’s sets and Beethoven’s intentions.

Gunter, whose principal reputation is with London’s legitimate theatre, never returned to the San Francisco Opera. I could imagine that Beethoven would have enjoyed seeing the staging of this production.