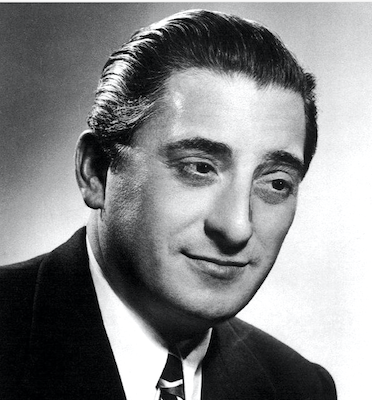 On November 3, 1955, the San Francisco Opera performed Gounod’s “Faust” at the Fox Theater in San Diego.

[Below: New York tenor Jan Peerce in 1953; edited image, based on an historical photograph.] 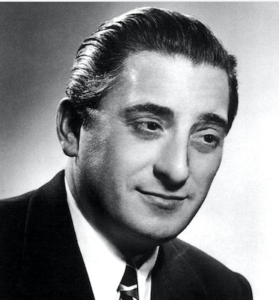 The performance was no second-string pick-up cast, but included four of the most important operatic recording artists of the mid-20th century. Licia Albanese and Jan Peerce were international stars, both of whom recorded together with Arturo Toscanini.

[Below: Licia Albanese as Marguerite in the New York Metropolitan Opera’s 1943 production of Gounod’s “Faust”; edited image of an historical photograph.] 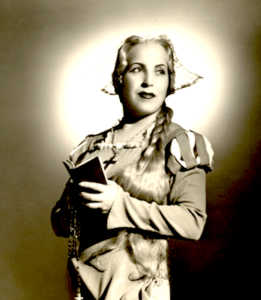 It was early in Cesare Siepi’s career and at the beginning of Cornell McNeil’s. But what I did not realize at the time is that the performance in San Diego brought together a cast that did not perform in this opera together in the either the San Francisco or Los Angeles portions of the San Francisco Opera’s 1955 season, and I think it was the only time ever that these stars performed together in the same opera.

[Below: Cesare Siepi and Licia Albanese at a Roma di Notte dinner; edited image, based on a photograph from www.richardmohr.com.] 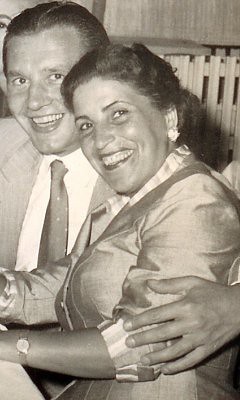 It now is commonplace for the same cast to stay together for half a dozen to a dozen or more performances of a particular opera. But that was not the case in San Francisco in 1955. Consider the 1955 season schedules of the five principals that came together in the San Diego “Faust”:

Licia Albanese (Marguerite) performed in San Francisco September 30 and October 6 (Donna Anna in “Don Giovanni”), October 11 and 16 (Nedda in “I Pagliacci”) She participated in a San Francisco Opera gala performance in Pasadena on October 27 (Violetta in the second act of “La Traviata”), sang Marguerite in San Diego November 3 and then reprised Donna Anna in Los Angeles on November 5.

Jan Peerce (Faust) was with Albanese on September 30 and October 6 (Don Ottavio in “Don Giovanni”), then appeared in Southern California October 27 for the Pasadena gala (Duke of Mantua in Act II of “Rigoletto”), the single “Faust” on November 3 in San Diego and the November 5 Don Ottavio in Los Angeles.

[Below: Jan Peerce and Licia Albanese listed to a playback of their recording of Bizet’s “Carmen” for RCA Victor; edited image, based on a historical photograph, from www.richardmohr.com.] 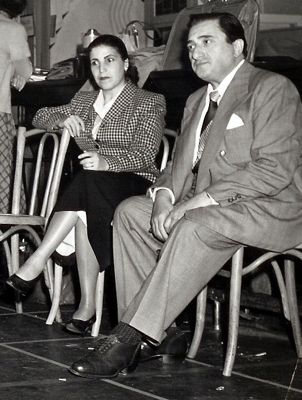 Margaret Roggero (Siebel) did not appear in San Francisco at all that season, but arrived in San Diego for the “Faust” performance on November 3, followed by a single Suzuki in “Madama Butterfly” on November 6 in Los Angeles.

Although San Francisco audiences did see MacNeil’s Valentine and Siepi’s Mephistopheles, San Diego was the only city to see Albanese, Peerce and Roggero in a San Francisco Opera production of “Faust ” in 1955.

In today’s operatic world, for worse or better, the great voices do not show up at a single company to perform one or two performances each of several works. But from the standpoint of a novice opera-goer, this provided a wonderful opportunity to see world class singers in a variety of roles.

Let’s review the month of San Francisco Opera activities from the very special vantage point of my introduction to live performances of great singers in major roles.

Licia Albanese, then in her early 40s, was performing in her 13th season at the San Francisco Opera, and was to sing four more seasons with the opera company, but only three of them in San Francisco. She had performed on September 30 and October 6, 1955 in San Francisco as Donna Anna in a new production of “Don Giovanni” with Siepi as Don Giovanni and Peerce as Don Ottavio.

Elizabeth Schwarzkopf (who was to be my first Fiordiligi in “Cosi Fan Tutte” and Marschallin in “Der Rosenkavalier” as well as my first Donna Elvira in “Don Giovanni”), performed the latter role. Rosanna Carteri and Lorenzo Alvary (my first Don Alfonso in “Cosi Fan Tutte”, Hunding in “Die Walkure”, Raimondo in “Lucia di Lammermoor” and One-Armed Man in “Die Frau ohne Schatten”) were respectively Zerlina and Leporello.

Then the San Francisco Opera travelled to Southern California. Albanese, Peerce and MacNeil perfomed in a gala evening in Pasadena on October 27, where Albanese performed in a stand-alone second act of “La Traviata” and the two men likewise for the second act of “Rigoletto”. All three were next heard in the San Diego “Faust”.

MacNeil had debuted earlier in San Francisco (September 17) as Escamillo in “Carmen” with Nell Rankin (my first Dorabella in “Cosi Fan Tutte” and Fricka in “Die Walkure”) as Carmen and Richard Lewis (my first Ferrando in “Cosi Fan Tutte, Bacchus in “Ariadne auf Naxos”, Don Ottavio, Captain in “Wozzeck” and Captain Vere in “Billy Budd”) as Don Jose.

Jean Morel conducted both Carmen and Faust (including the San Diego performances). The night before the San Diego “Faust”, Morel was conducting “Carmen” in Los Angeles with MacNeil as Escamillo.

Siepi and MacNeil performed, respectively, their first Mephistopheles and Valentine in “Faust” as the San Francisco Opera traveled to Sacramento for the first “Faust” of the season, October 9 (without Albanese, Peerce or Roggero) and repeated those roles in San Francisco October 18 and in Los Angeles October 29.