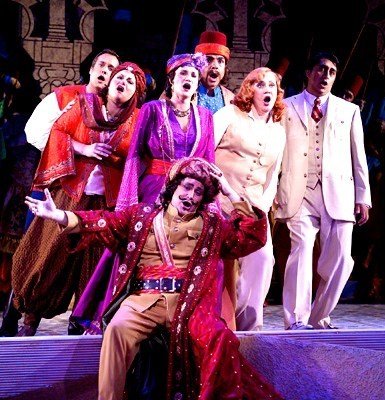 In September, the San Francisco Opera mounted director Edward Hastings and set designer Robert Innes Hopkins’ realization of Rossini’s “L’Italiana in Algeri” in a production borrowed from the Santa Fe Opera. The Hastings/Hopkins’ production of Janacek’s “The Cunning Little Vixen” was seen in San Francisco in 2004.

“L’Italiana” was, of course, Rossini’s first big hit, and it has maintained a toe-hold on the repertoire as the third banana behind Rossini’s “Barbiere di Siviglia”, the most popular comic opera of all time, and his “La Cenerentola”. The now famous Santa Fe production, is time-shifted to permit an Amelia Earhart-like aviatrix to land her plane in Arab Algiers whose bey, Mustafa, has enslaved her lover Lindoro. The production is currently making the rounds of U. S. opera houses.

[Below: the aviatrix l’Italiana (here, Stephanie Blythe in Santa Fe Opera’s 2002 production, crashes her plane in Algiers; edited image, based on a Ken Howard photograph for the Santa Fe Opera.] 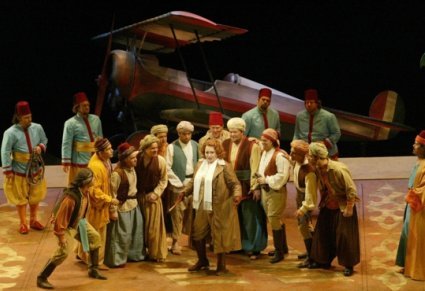 Making Isabella, the Italian Girl, an aviatrix allows an audience-pleasing model plane to descend wires strung across the opera house, forward of the proscenium, followed by an onstage mock explosion signifying the plane’s landing, and, as well, some period costume designs by David Woolard.

One, of course, can easily be too rigorous in trying to sort through the implications of the time-shift, but I wonder whether this production might raise eyebrows in, say, Paris. By shifting the action to the late 1920s or so, we encounter an historical Algiers that has been subjected to French colonial rule for a century, and populated by European pieds-noirs who are protected from any nativist mischief by the French Foreign Legion. Any early 20th century Mustafa would either have been a colonial functionary, or a Taureg or Berber chieftain operating in the remote desert.

Algerian potentates encountered by an early 20th century aviatrix, would not dress and act, as they do in this and every other production of which I have heard, like a 17th century Ottoman pasha, or someone from Disney’s “Aladdin”. (The Ottomons did rule Algeria in the 17th century.) However, it would be pretty radical, maybe even a bit dangerous conceptually, to move this confection any further out of the world of fantasy into the reality of the early 20th century North Africa, only two or three decades before France’s disastrous Algerian War.

The San Francisco Opera production presented two Isabellas, Olga Borodina, who has a number of successful San Francisco Opera roles to her credit, and Vivica Genaux, making her company debut. My schedule coincided with a performance by Genaux, who is a noted baroque period and bel canto stylist, whom I have associated with more intimate settings than the War Memorial Opera House. 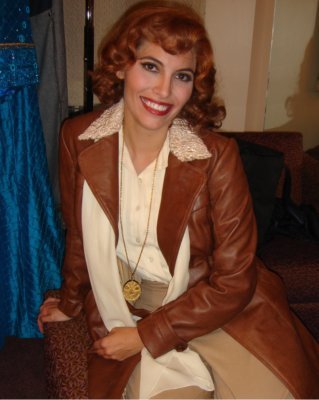 The pleasant surprise of this production was William Burden, the Lindoro, whose attractive light tenor voice was a major revelation. Burden is a graduate of San Francisco Opera’s Merola program and is already cast in star roles at the Met and Houston Grand Opera. David Gockley’s ascension to the general manager position at San Francisco leads one to hope that Burden will become a familiar name here.

[Below: Lindoro (William Burden, left) is comforted by Isabella (here, Olga Borodina); edited image, based on a Terrence McCarthy photograph, courtesy of the San Francisco Opera.] 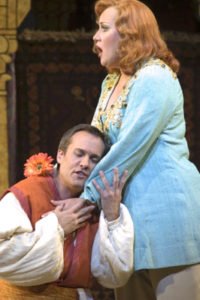 The Taddeo of Ricardo Herrera and Elvira of Jane Archibald also suggested promising careers. The Mustafa, Dean Peterson, was an extraordinary athlete, who skipped rope and performed body-building calisthenics, so that memories of his physical prowess crowd out recollections of his vocal abilities.

The highlight of any performance of “L’Italiana” is the hilarious ensemble at the end of the first Act. Seasoned opera-goers know that Rossini always ended the first half of his comic operas with the Rossini “knot” where all of the characters, their minds spinning, are overwhelmed by the complexity of the situation.

The “L’Italiana” ensemble, in which each character begins uttering some characteristic sound – a clock chiming, a bell ringing, a raven cawing –  to explain to the others what is taking place in their respective heads, is the stuff that stage directors, at least any with a flair for comedy, cut their teeth on.

[Below: the concertato ending the first act of the San Francisco Opera’s 2005 production of “L’Italiana”, in which Mustafa (here, Ildar Abdrazaov) is seated, while above him, from left to right, Lindoro (William Burden), Zulma (Catherine Cook), Elvira (Jane Archibald), Haly (Bojan Knezevic), Isabella (here, Olga Borodina) and Taddeo (Ricardo Herrera) explain the noises going through each of their heads; edited image, based on a Terrence McCarthy photograph, courtesy of the San Francisco Opera.] 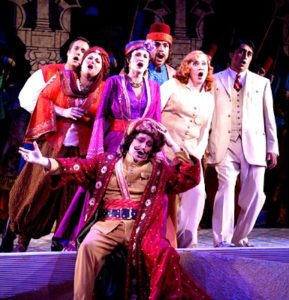 The principals bounce into each other; they move off in different directions with odd movements, then return to center stage in a bunch. They are choreographed clowns uttering very funny nonsense. (Chris Alexander was stage director for the S. F. performances.)

A patron sitting near me asked whether it was always played with such camp. Of course, the answer is yes. How else do you play a scene where the characters are singing the Italian equivalents of “My head is going ring-ding-ding” or “boom-a boom-a boom” or “caw-caw-caw”? A century and a half before “camp” became an American slang term, there existed the contrived silliness at the end of the first act of “L’Italiana”.

[Below: Elvira (Jane Archibald, center left) and Zulma (Catherine Cook) are feeling insecure about their positions at court as Haly (Bojan Knezevic, left) looks on; edited image, based on a Terrence McCarthy photograph, courtesy of the San Francisco Opera.] 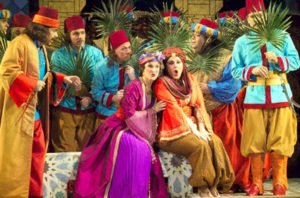 In San Francisco, “L’Italiana” is an opera that has been associated with Marilyn Horne. She assayed the role in the budget-priced San Francisco Opera Spring Season in 1964 (with Spiro Malas as her Taddeo and Patricia Brooks as her Elvira) in a production repeated with Helen Vanni in the role in 1966. A no-name cast revived the opera again in the Spring Opera 1978 season.

Horne’s great success with and obvious affection for the role of Isabella led to a career decision that, in retrospect, appears impulsive, at the least ill-advised. In 1973, SF Opera General Director Kurt Herbert Adler commissioned a new production of Donizetti’s “La Favorita” for Horne and Luciano Pavarotti. Meanwhile, Jean-Pierre Ponnelle was developing a new production of “L’Italiana” for the Metropolitan Opera, and Horne made the decision to withdraw from her S. F. commitments to take the Met job, far too late for Adler to obtain any internationally known star mezzo, such as Fiorenza Cossotto, to replace her. (For a moment, it seemed Christa Ludwig might step in for Horne, but that did not work out.)

Adler, one will recall, was the impresario that fired Maria Callas and invoked a ban on her performances in the United States for failing to show up for rehearsals for San Francisco Opera’s 1957 production of Donizetti’s “Lucia di Lammermoor”. His fury with Horne, in whose career development he was an important figure, took several seasons to abate. Nineteen years later, Horne, during the tenure of General Manager Lotfi Mansouri introduced “L’Italiana” to the San Francisco Opera main company’s repertoire, in Ponnelle’s production, borrowed from the Met. Frank Lopardo (Lindoro), Alfonso Antoniozzi (Taddeo) and Simone Alaimo (Mustafa) were her colleagues in that memorable 1992 performance.